In 1985, Nick Leeson had a job as a clerical work at Coutts & Co. The Coutts & Co is a private banking house in United Kingdom which own by aristocrat. This bank was a subsidiary of the National Westminster Bank. During that period, the stock markets were rising for several years and the bank were expanding into a new financial instruments coming in and demand for labor was high. During that time, Nick Leeson was the person who had many working class young men. 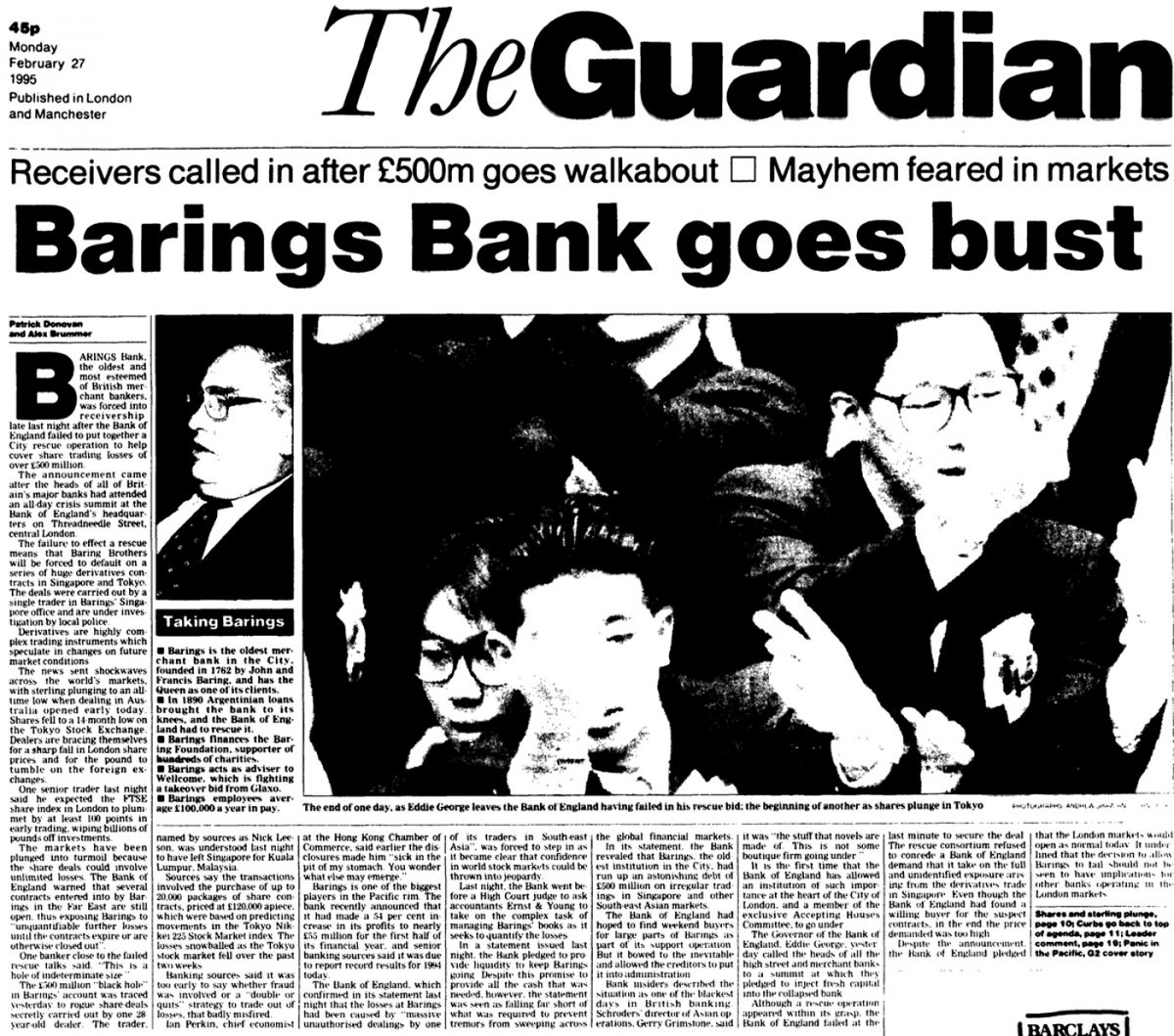 Nick Leeson was lucky, he had a chance to overcome severe settlement problems in Jakarta Indonesia because Ian Martin, the finance director was appointed him and give him a chance to settle this problem. That time Baring Securities scared their losses running into million and million and sent out four-man team to settle this problem. One of the member in Four-man team was Lisa, Lisa become Nick Leeson wife at 1992. That time, Nick Leeson feels unsatisfied that he need spending whole life in sorting out share certificates.

The organization of Baring Securities is under Peter Norris. Peter Norris choose Nick Leeson to looking in the matter and discovering that a financial adviser was using client money to do own trading. Ian Martin, amazed with Nick Leeson’s performance and put in charge of the derivatives-settlements desk. This make Nick Leeson gain more knowledge about computer technology, balance sheet, Japanese derivatives trading. Even Nick Leeson have a confidence of his superiors but he don’t have qualification to take professional examinations.

Nick Leeson and his traders had the authority to do transaction of futures and options orders for Barings Singapore’s clients and arbitrage the differences of price between Nikkei futures traded on the SIMEX and Japan’s Osaka exchange. Nick Leeson eliminating the necessary checks and balances that found on the trading. Besides, the Barings Bank senior management team was formed by a merchant banking background of people who are not so familiar with the risk involved in trading activities. They underestimate the possibility for Nick Leeson to fail in the trading activities. With lack of supervision, Nick Leeson promptly started unauthorized speculation in futures on Nikkei 225 stock index and Japanese government bonds which were outright. The returns on this unauthorized strategy is either a high fantastically gains or a huge utterly losses.

In year 1992, Baring Securities in London opened a branch in Singapore to trade futures and options. A considered decision to choose a people who can take can the offices. Nick Leeson was giving a chance to take over this job because he was the immediate choice. After March 1992, Nick Leeson and Lisa going to Singapore started a new journey.

The Baring Bank’s actions were unclear and hard to understand. Errors are unavoidable in this market, where leading, with the exception of options, is done on the ‘open outcry’ system. The bank didn’t check Leeson’s trades due to error account but the bank need identified and rectified with faster speed by someone not actually involved in dealing. James Bax and Simon admitted Nick Leeson can handle the senior position because Nick Leeson had talent to handle this position. In Baring bank, Nick Leeson as a floor manager which responsible to Jones and Gordon Bowser who in charge of futures-and-settlements in London.

Four month after arriving Singapore, Nick Leeson was applied as an associate member of SIMEX ; it was approved on August 12, 1992. Leeson began to trade. In July 3, 1992, Nick Leeson opened an ‘error account’ with number 88888. Nick Leeson thought that eight was a lucky number for some Chinese. This account full with strangeness and it had been open such an account in London. If there were too many errors, the London Securities and Futures Authority might be suspect that account. This case showed Singapore authorities in SIMEX were ignorance.

When Nick Leeson started trading, it make Leeson lost money because Nick Leeson failed to hedge his contracts. Nick Leeson was try to hide his losses by written a fake report to London day by day. Securities bank of London was not recognized the error account and no detail of 88888 in the internal reporting system. Nick Leeson had intention to cheat his employers. Nick Leeson continue trading heavily and working long hours. It began badly wrong when Nick Leeson trying to covered a woman colleague who sold 20 contracts. On July 3 1992, the 88888 account recording a loss of £40,000. Within two months, the loss reached £320,000. Nick Leeson didn’t do any hedging his deal because of his basic mistake.

In October 1992, Nick Leeson sold options and did not hedge. This action made Nick Leeson facing a massive losses. Trading for six months, Nick Leeson facing a trading loss of £2 million. Besides, Nick Leeson hide the truth about his losses and resorting to fraud. However, Nick Leeson was practiced arbitrage on which the profits went to Baring and not on its clients. This was a trading on minute differences in price between one centre and another and the profit can be made by using swift dealing. Nick Leeson think that Singapore was a better place to trade compared with Tokyo and Osaka. SIMEX had a margin requirement at 15% which was half compare with Osaka.

In the year 1993, Nick Leeson think to quit, but he scared to lost his job. He was away from correct path by his own conceit because he overestimate of his abilities. In the end of 1993, losses that Nick Leeson made was about £24 million. No one knew what Nick Leeson done in his own trading. These can saw that the Baring’s directors thought the bank was running well and the central bank gave the special permission needed for Baring bank to send abroad more than 25% of its capital to support its derivatives trading.

Simon Jones was a strong supporter for Nick Leeson because Simon Jones want to protect the Singapore business even he don’t knew what was going on with his Singapore business. Tony Hawes from BIB knew and worried about the not reconciled trades and he was treated it as matter. At the same time, Nick Leeson try to cheat his traders by telling them the fake level of profits and also explain to those traders that he had been doing cross-trading. Cross-trading is a device where bank saves costs by swapping buy and sell order among its customers by producing two lists of prices.

In January 12, 1995, the Cooper & Lybrand audit was proceeding and the Pang Mui Mui the Singaporean accountants detected discrepancies and requested Nick Leeson for a explanation. Nick Leeson try to lie and blamed the system to disturb Pang Mui Mui’s findings. Pang Mui Mui persisted and informed to her audit manager, Seet Wee Teong. February 3 1995 the audit had done. In the same time, SIMEX become more aware for the deficit account which was 88888 error account. The margin required for the account was over S$342 million but only S$242 million was deposited to SIMEX. The Kobe earthquake on 17 January, Nick Leeson keep trading, he was buying while the market became unstable. It was a tremendous gamble and had it come off and the market rebounded. Nick Leeson try to rectify his position and his failed to rectify it. The losses that Nick Leeson made was out of control and Nick Leeson still cooking the books, recording profits.

No action was taken by internal division in Baring but the bank’s assets and liabilities committee had decided to tell Nick Leeson not to increase his positions and try to reduce them but it was too late. The audit date was near and Nick Leeson try proceeded to simple forgery for trades. Baring Securities of London getting more nervous, James Bax suggested that settlements role must be taken away from Nick Leeson. Tony Hawes from BIB started suspected and questioned Nick Leeson about the illegal activity that he was done.

Nick Leeson knew that he was game over and he planned to run away from there. Nick Leeson and Lisa leaved Singapore at February 23. Nick Leeson had lost £870 million and the bank was bust.