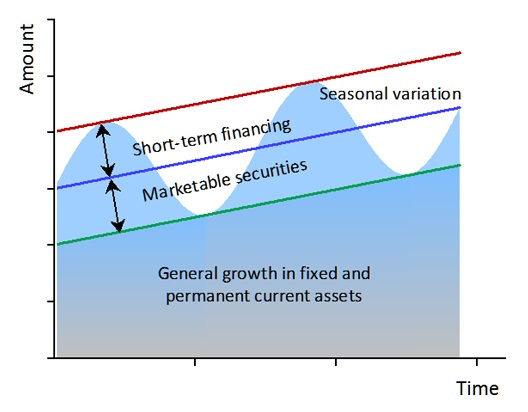 The main sources of short-term working capital are as follows:

Private moneylenders and other country bankers used to be the only source of finance prior to the establishment of commercial banks. They used to charge very high rates of interest and exploited the customers to the largest extent possible. Now a day with the development of commercial banks they have lost their monopoly. But even today some business houses have to depend upon indigenous bankers for obtaining loans to meet their working capital requirements.

Trade credit refers to the credit extended by the suppliers of goods in the normal course of business. As present day commerce is built upon credit, the trade credit arrangement of a firm with its suppliers is an important source of short-term finance. The credit-worthiness of a firm and the confidence of its suppliers are the main basis of securing trade credit. It is mostly granted on an open account basis whereby supplier sends goods to the buyer for the payment to be received in future as per terms of the sales invoice. It may also take the form of bills payable whereby the buyer signs a bill of exchange payable on a specified future date.

When a firm delays the payment beyond the due date as per the terms of sales invoice, it is called stretching accounts payable. A firm may generate additional short-term finances by stretching accounts payable, but it may have to pay penal interest charges as well as to forgo cash discount. If a firm delays the payment frequently, it adversely affects the credit worthiness of the firm and it may not be allowed such credit facilities in future.

The main advantages of trade credit as a source of short-term finance include:

However, the biggest disadvantage of this method of finance is charging of higher prices by the suppliers and loss of cash discount.

This is another method by which the assets are purchased and the possession of goods is taken immediately but the payment is made in installments over a pre-determined period of time. Generally, interest is charged on the unpaid price or it may be adjusted in the price. But, in any case, it provides funds for sometime and is used as a source of short-term working capital by many business houses, which have difficult fund position.

One way of raising funds for short-term requirement is to demand for advance from one’s own customers. Example of advances from the customers is advanced at the time of booking a car, a telephone connection, a flat. This has become an increasingly popular source of short-term finance among the companies mainly due to two reasons. First, the companies do not pay any interest on advances from their customers. Second, if any company pays interest on advances, that too at a nominal rate.  It is a cheap source of finance and in order to minimize their investment in working capital, some firms having long production cycle, specially the firms manufacturing industrial products prefer to take advances from their customers.

Another method of raising short-term finance is through accounts receivable credit offered by commercial banks and factors. A commercial bank may provide finance by discounting the bills or invoices of its customers. Thus, a firm gets immediate payment for sales made on credit. A factor is a financial institution, which offers services relating to management and financing of debts arising out of credit sales. Factoring becoming popular allover the world on account of various services offered by the institutions engaged in it. Factors render services varying from bill discounting facilities offered by commercial banks to a total take over of administration of credit sales including maintenance of sales ledger, collection of accounts receivables, credit control and protection from bad debts, provision of finance and rendering of advisory services to their clients. Factoring may be on a recourse basis, where the risk of bad debts is borne by the client, or on a non-recourse basis, where the risk of credit is borne by the factor.

In spite of many services offered by factoring, it suffers from certain limitations. The most critical  fallout’s  of factoring include; (i) the high cost of factoring as compared to other sources of short-term finance, (ii) the perception of financial weakness about the firm availing factoring services, and (iii) adverse impact of tough stance taken by factor, against a defaulting buyer, upon the borrower resulting into reduced future sales.

Accrued expenses are the expenses which have been incurred but not yet due and hence not yet paid also. These simply represent a liability that a firm has to pay for the services already received by it. The most important items of accruals are wages and salaries, interest, and taxes. Wages and salaries are usually paid on monthly, fortnightly or weekly basis for the services already rendered by employees. The longer the payment-period, the greater is the amount of liability towards employees or the funds provided by them. In the same manner, accrued interest and taxes also constitute a short-term source of finance. Taxes are paid after collection and in the intervening period serve as a good source of finance. Even income tax is paid periodically much after the profits have been earned. Like taxes, interest is also paid periodically while a firm uses the funds, continuously. Thus, all accrued expenses can be used as a source of finance.

The amount of accruals varies with the change in the level of activity of a firm. When the activity level expands, accruals also increase and hence they provide a spontaneous source of finance. Further, as no interest is payable on accrued expenses, they represent a free source of financing. However, it must be noted that it may not be desirable or even possible to postpone these expenses for a long period. Provisions of law and practice in industry determine the payment period of wages and salaries. Similarly, law governs the payment dates of taxes and delays may attract penalties. Thus, we may conclude that frequency and magnitude of accruals is beyond the control of managements. Even then, they serve as a spontaneous, interest free, limited source of short-term financing.

Deferred incomes are incomes received in advance before supplying goods or services. They represent funds received by a firm for which it has to supply goods or services in future. These funds increase the liquidity of a firm and constitute an important source of short-term finance. However, firm having great demand for its products and services, and those having good reputation in the market can demand deferred incomes.

Commercial paper represents unsecured promissory notes issued by firm to raise short-term funds. It is an important money market instrument in advanced countries like U.S.A. But only large companies enjoying high credit rating and sound financial health can issue commercial paper to raise short-term funds. The Reserve Bank of India has laid down a number of conditions to determine eligibility of a company for the issue of commercial paper. Only a company, which is listed on the stock exchange, has a net worth of at least Rs. 10 crores and a maximum permissible bank finance of Rs. 25 crores can issue commercial paper not exceeding 30 per cent of its working capital limit.  The maturity period of commercial paper, in India, mostly ranges from 91 to 180 days. It is sold at a discount from its face value and redeemed at face value on its maturity. Hence, the cost of raising funds, through this source, is a function of the amount of discount and the Reserve Bank of India provides the period of maturity and no interest rate for this purpose. Investors including banks, insurance companies, unit trusts and firm to invest surplus funds for a short period usually buy commercial paper. A credit rating agency, called CRISIL, has been set up in India by ICICI and UTI to rate commercial papers.

Commercial paper is a cheaper source of raising short-term finance as compared to the bank credit and proves to be effective even during period of tight bank credit. However, only large companies enjoying high credit rating and sound financial health can use it as a source of finance. Another disadvantage of commercial paper is that it cannot be redeemed before the maturity date even if the issuing firm has surplus funds to pay back.