The agency theory is a mixture of the relationships between principals and agents, it occurs when the principal and the agents create a delegation. The agency theory argues that in modern corporations, where share ownership is widely held, managerial actions depart from those required to maximize the shareholder’s return. In Agency theory terms, the owners are principals and the managers are agents and there is an Agency loss which is the extent to which returns to the residual claimants, the owners, fall below what they would be if the principals, and the owners, exercised direct control of the corporation. 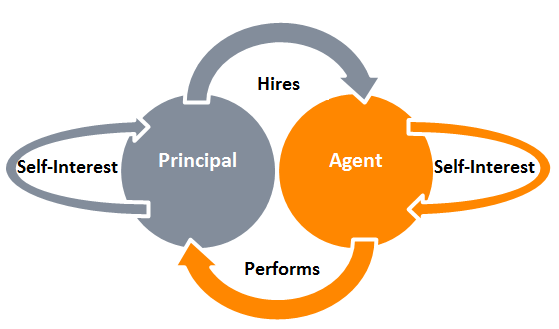 The long-term strategies for agency theory include the principle of the company, business, franchise, etc. providing incentives such as increasing commission, continuing to provide advertising, training, and motivation to increase outlet operations. Regarding the exogenous factor, outlet managers have an incentive to shirk and misrepresent their abilities because the firm is hard to differentiate the manager’s performance behavior, while the short-term strategies include balancing supply with demand at the shortest turn around time.

Agency theory tends to impact business decisions by focusing on establishing incentives as mentioned in the long-term strategies above. However, it may be very costly and may create moral hazards if top management tries to over maximize profits for themselves instead of for the employees. The cost to manage and monitor transactions can affect both the domestic and global financial managers due to the strategy becoming very expensive; nevertheless, this strategy can have a negative impact on the organization’s survival.

There is a conflict between principals and agents (shareholders and managers) that can potentially have a devastating business consequence. The cost of monitoring efforts, measuring results, and opportunities lost can be substantial. Incentives and disincentives may not result in a wanted outcome when businesses should scan their environment constantly to seek opportunities to meet the interest of their own stakeholders. Agency theory is a small entity of financial economics that looks at conflicts of interest between people that have different interests for the same assets, this means that there will always be constant conflicts between shareholders & managers and shareholders & bondholders. These are the reason why organization’s make constant acquisitions that tend to be bad for the shareholder, why convertible bonds are preferably used while normal bonds are often sold with warrants and finally shows the importance of capital structures.

Agency theory is devoted to the solution of two problems that can arise from agency relationships. The first problem is goal-related and arises when: i) there is a conflict between the goals of the principal and the agent, and ii) the verification of the agent’s behavior is difficult or expensive to be verified by the principal. The second problem is risk-related. If the agent and the principal have different attitudes towards risk, it is likely that both will behave differently and in accordance with their risk preferences.

Identifying conflicting positions between any two agents and explaining the governance mechanisms underlying these relationships (that limit the agents’ behavior) is known as the Positivist agency theory. A different position is found in the principal-agent research (as opposed to the positivistic agency theory) and relies on a more mathematical and abstract approach to the problem. Although in different perspectives, these two approaches can be complementary: Positivistic theory identifies various contract alternatives, and the principal-agent theory indicates which contract is the most efficient under varying levels of outcome uncertainty, risk aversion, information, and other variables.

The major popularity of the application of the agency theory to the relationship between shareholders and the board of directors produced a vast amount of research devoted to this issue. In fact, this phenomenon relates to those cases in which ownership and management are represented by different individuals. Being each individual maximizing its utility leads to the existence of conflicting positions between the agent and the principal. This became the main focus of study and justifies the need for such an agency theory. This problem is on the basis of the role of agent theory in accountancy practices.

Contracts between shareholders and managers are written in order to reduce agency cost, and thereby, the deadweight loss in firm value as a result of the separation of ownership from control. Accounting is considered to play an important role as an integral part of the contracts that define a firm. For example, lending arrangements between a firm and its creditors often contain several accounting-based covenants. Accounting-based bonus plans are frequently a component of executive compensation plans. Accounting measures are commonly used in the performance evaluation of a firm’s cost and profit centers. If accounting is an important part of the firm’s contracting process and agency costs (and hence, firm value and/or managers’ compensation) vary with different contracts, accounting procedures have the potential to affect firm value and/or the manager’s compensation. This rationale has given rise to several hypotheses regarding the role of accounting information in the market valuation of firms and managers’ use of accounting discretion.

Agency cost is a major problem with organizations and with constant fraud cases that are growing around the world, there needed to be a major development of the theory in accounting practices. A way of developing the theory is to minimize agency costs that can be accomplished through communications, sharing risks and benefits, and seeking to balance the scorecards. The theory has developed by establishing performance standards, using cost-effective processes, cost management tools and incentives have all helped the problem of managing agency problems.

Accountancy provides information to base future decisions on historical performances. Providing accurate information about costs it is possible to predict the result of future production. This perspective is particularly important in the case of, for example, government contracts, in which an agent-principal relationship is also established. A different perspective is that accounting provides an opportunity for control from the agent over the principal. In this respect, the insights about the relationship between the shareholders and management were particularly important in demonstrating the role of accountancy as a key information provider.

To that extent, it was suggested that accountancy reporting is a result of the separation of ownership from management phenomena. Hence, it can be argued that the reporting practice is a result of the agency problem and serves the control needed to verify the agent’s performance.

Another perspective was the budget development based on historical accounts. Contracts usually include a price for production which has not taken place yet. The pricing of these contracts has to be based on historical costs that can only be provided by accountancy. To that extent, accountancy practice is not a result of the agent-principal problem but is originated to avoid uncertainty in principal-agent relationships.

The agency theory was clearly an issue in Enron’s case because the managers of the firm were transferring wealth from the shareholders to themselves in the form of stock performance. Not only were there the Shareholders to Management agency problem there was also an employer to the employee agency problem. With regard to the shareholder to management problem, the shareholders had placed a large amount of decision-making capability onto the management team and had not successfully monitored the agent’s behavior. Given that the managers had all come to Enron with a strong reputation, it was expected that they would act in the interest of the shareholders. [As such the shareholders] had monitored the manager’s performance very little. As a shareholder, it would have been in the best interests to implement monitoring costs to “measure, observe and control” Jeffrey Skilling’s behavior. Unfortunately, this would not have been enough. The introduction of Fastow described as “a genius” in a number of sources, allowing for the performance of Enron to appear strong even in dire times. The use of SPE’s and mark-to-market accounting allowed for the reduction of monitoring costs by incurring bonding costs [in the form of quarterly statements] that allowed Enron to perform better than it appeared.

Another point that links is that the agency theory is the principal will remunerate the agent according to the principal’s expectations of how much the agent’s behavior is likely to be contrary to the principal’s interests. Given that managers of Enron were all major shareholders of the company the focus was on driving the share price up which was done by a process called “pump and dump; this process involved buying up the share price and then selling out” this allowed the directors to maintain high remuneration because they were achieving high share prices for the principals and also allowed them to gain from share price rises before selling out at the top.

Finally, the principal-agent relationship that occurs between Skilling and Fastow (CEO of Enron) is that of an employee to employer. This relationship is important because it emphasizes the importance of the ability to monitor employee’s work efforts. Skilling and Ken Lay claim that they were unaware of what Fastow was doing with regards to the financial statements, however, Skilling and Lay were acting as the agents for the shareholders as well as acting as the principals for Fastow. Their involvement in such transactions as the one with LJM were not only disclosed to the board at a meeting which took place in 1999, but the board approved of [Fastow’s] participation, following a recommendation to this effect from the then CEO and Chairman, Ken Lay. From this we can clearly see that Lay, Skilling and Fastow were all part of the agency problem that occurred.

This article has shown that several areas of accounting have been affected by the agency theory model. This theory has defiantly had implications in financial accounting, management accounting, and corporate finance. Nevertheless, the strongest argument that relates to agency theory with accountancy mainly relies on the nature of both, the accounting and agency theory relies on the existence of contracts, these contracts rely on the core of the relationship between agents and the principal. Furthermore, agency theory’s core role is the risk associated with the relationship whereas accountancy reduces risk by providing information about the agents in action. Additionally reporting previous behaviors of the agent showing that the historical agent has kept the conditions of contract, may provide indications for the principal about the future behavior of agents; increasing trust levels in the relationship and reducing the risk associated with relations.

In conclusion, the current features (and practices) of accountancy meet the agency model problems proving the information to avoid opportunistic behaviors and ensuring that relational contracts are met.