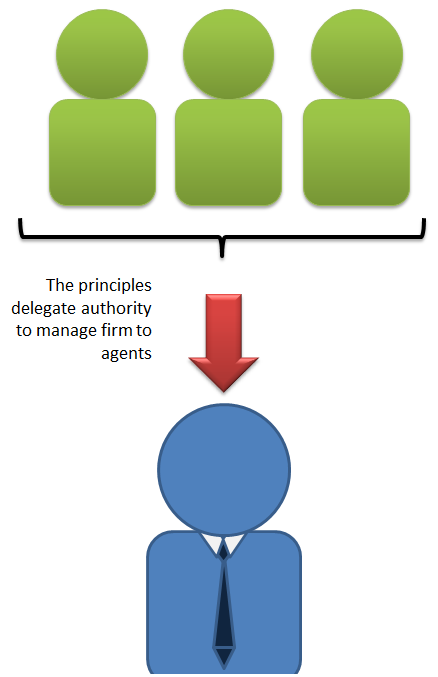 In most of these principal-agent relationships conflicts of interest is seen to exist. It has been widely observed that the conflicts between shareholders and managers and in a similar way the objectives of employees and managers may be in conflict. Although the actions of all the parties are united by one mutual objective of wishing the firm to survive, the various principals involved might make various arrangements to ensure their agents work closer to their own interests. For example, shareholders might insist that part of management remuneration is in the form of a profit related bonus. The agency relationship arising from the separation of ownership from management is sometimes characterized as the agency problem. For example, if managers hold none or very little of the equity shares of the company they work for, what is to stop them from: Working inefficiently? Not bothering to look for profitable new investment opportunities? Giving themselves high salaries and perks?

Agency theory suggests that, in imperfect labor and capital markets, managers will seek to maximize their own utility at the expense of corporate shareholders. Agents have the ability to operate in their own self-interest rather than in the best interests of the firm because of asymmetric information (e.g., managers know better than shareholders whether they are capable of meeting the shareholders’ objectives) and uncertainty (e.g., myriad factors contribute to final outcomes, and it may not be evident whether the agent directly caused a given outcome, positive or negative). Evidence of self-interested managerial behaviour includes the consumption of some corporate resources in the form of perquisites and the avoidance of optimal risk positions, whereby risk-averse managers bypass profitable opportunities in which the firm’s shareholders would prefer they invest. Outside investors recognize that the firm will make decisions contrary to their best interests. Accordingly, investors will discount the prices they are willing to pay for the firm’s securities.

Agency costs are defined as those costs borne by shareholders to encourage managers to maximize shareholder wealth rather than behave in their own self-interests. There are three major types of agency costs:

One power that shareholders possess is the right to remove the directors from office. But shareholders have to take the initiative to do this, and in many companies, the shareholders lack the energy and organization to take such a step. Even so, directors will want the company’s report and accounts, and the proposed final dividend, to meet with shareholders’ approval at the  Annual General   Meeting. Another reason why managers might do their best to improve the financial performance of their company is that managers’ pay is often related to the size or profitability of the company. Managers in very big companies, or in very profitable companies, will normally expect to earn higher salaries than managers in smaller or less successful companies. Perhaps the most effective method is one of long-term share option schemes to ensure that shareholder and manager objectives coincide. Management audits can also be employed to monitor the actions of managers.

Creditors commonly write restrictive covenants into loan agreements to protect the safety of their funds. These arrangements involve time and money both in initial set-up, and subsequent monitoring, these being referred to as agency costs.