The Prospect Theory was originally conceived by Kahneman and Tversky (1979) and later resulted in Daniel Kahneman being awarded the Nobel Prize for Economics. The work by the authors is considered as path breaking in behavioral finance. They introduced the concept of prospect theory for the analysis of decision making under risk. This theory is considered to be seminal in the literature of behavioral finance. It was developed as an alternative model for expected utility theory. It throws light on how individual evaluate gain or losses. The prospect theory has three key aspects. 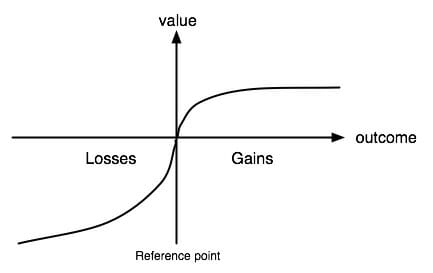 The shape of the S shaped valued function is concave in the region of gain and convex in the loss region reflecting risk aversion in the domain of gains and risk seeking in the domain of losses. The interesting property of the value function is that it is steepest at the reference point. It implies that a given change in gains or losses has a smaller effect on the value experienced by an investor when the distance to the reference point is large. Prospect theory maintains that when choosing between gambles people compare the gain and losses for each one and selects the one with the highest perspective utility. This argument indicates that people may choose a portfolio allocation by computing for each allocation the potential gains and losses in the value of their holdings and then taking the allocation with the highest prospective utility. Prospect theory has another element relating to weighing function. The value of each outcome is multiplied by decision weight. Decision weight measures the impact of events on the desirability of an investment. Kahneman and Tversky call this property as sub certainly decision weight age generally repressive with respect to true probabilities implying that preferences are less sensitive to variations in probability than the rational benchmark would suggest. Prospect theory describes several states of mind that can be expected to influences on individuals decision making process.