Economic systems may broadly be classified into three categories: Capitalism, Socialism and Mixed economy. A number of other types also emerged but all of them came close to any one of the above three types of economic systems. Let us now discuss the features, strengths and weaknesses of each one of these economic systems.

Capitalism is an economic system based on the principle of free enterprise. Individual ownership of resources is an important feature. With control and command over resources, individuals can conduct any type of business. The object in such a system is to maximize private gains. Any type of enterprise or production of any commodity or service is permitted, so long it is wanted by the society. In such a system the market forces determine the resource allocation and price. That is, the demand and supply forces together determine what to produce, how to produce and for whom to produce. Price mechanism is the nucleus of the capitalistic society. The price mechanism clearly reflects the wants of the people. Once this is known, the producers would allocate the resources to manufacture and sell the products in great demand. While doing so, there is no control or regulation over production. In other words, oligopoly environment prevails. But each producer differentiates his product that he would be able to stay in the market. Technology and innovation ensure the stability and growth of organizations. As a result only efficient organization would survive. The resources would be fully utilized. The system is so flexible that it can adjust itself for any economic condition. The workers get equal opportunities and those with skills would be able to command better wages and salaries. On the whole capitalism offers scope for growth of efficient individuals and organizations.

But capitalism has a number of weaknesses. The important ones are discussed below.

Socialism refers to an economic system in which the following features predominant:

The resources are owned by the state or state owned institutions. Production takes place in the interest of the society and not for maximizing profits of individuals or organizations. Government decides the type of productive efforts to be permitted. In other words, in a socialist country, government can adopt licensing system and other types of regulations to prevent the emergence of monopolist and exploitative tendencies. Maximization of community welfare is the objective than profit maximization. Another very important feature is the government ensures equitable distribution of national product. Public distribution system assumes enormous significance in such an economic system. On the whole, the socialistic society differs from capitalist society in every sense. In the broad spectrum of economic systems, socialism and capitalism occupy two extremes. In the world today, pure capitalistic society is not seen in any country. Even in USA, government interference in various economic activities is found. For example, in the field of national defense, atomic energy, space technology, social security, etc., the presence of government is almost complete. Government also retains the right to interfere in the market system, whenever there is deliberate and intentional attempt to monopolize the resource ownership or the market. Similarly, in the erstwhile Soviet Union, socialistic principles were followed. But even here, there were instances of private ownership of property, enterprises, etc., were reported. That is why it is very difficult to come across pure capitalistic or socialistic societies.

The merits of socialism includes:

However, socialistic states suffer from the following limitations: 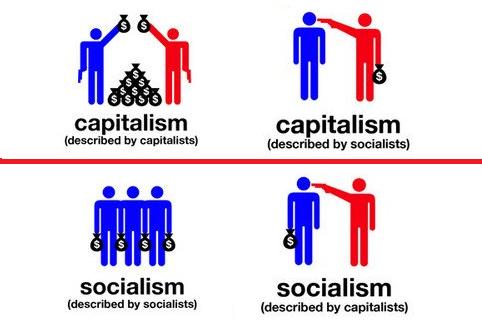 There was no reference to the mixed economic system in Economic literature in the past. Economists were mainly familiar and advocated the Laissez faire or free enterprise system, as several countries could develop fast following the free enterprise system, in which there was no or little government intervention. The entire economic system operated with the price mechanism at its center point. The producers produced what the consumers wanted and this provided very little scope for the government to intervene in the system. The Classical economists and their ardent supporters believed that the invisible hand will direct the economy and with private initiative and enterprise, every country should be able to record a faster growth as proved in the case of UK, USA, Europe, Australia, and other countries.

But over a period under the leadership of Karl Marx, a new economic system was developed called socialism, in which there is no scope for any private enterprise as everything owned and controlled by the government. The government decided the type of developmental activities and me requirements of the society and used the available resources in the provision of these requirements. Several countries like USSR, Communist China, Vietnam, Cuba and others preferred this socialist system in which government is made the custodian of the society. The main reason for the emergence of this new economic system was the failure of capitalism during the 1929 depression to revive every economy from depression. Keynes himself thought that capitalism without some of its evils could certainly help economic recovery. Hence, a time came when economists felt that cent per cent free enterprise or cent per cent government governed economic development cannot work satisfactorily. A compromise between these extremes was thought of as an ideal economic system. The new system called ‘mixed economic system’ contained the merits of both the capitalism and socialism and appeared to be full of promise. This mixed economic system is adopted by India as indicated by the First Industrial Policy Resolution 1948.

The main characteristics of mixed economy are:

As has been already stated, in a mixed economy there is a need to achieve a compromise between self-interest and social interest. This is a very difficult task as the government has to carefully foresee the type of development it wants to achieve and closely monitor the activities of the private sector to ensure that the social interest is never at stake. Obviously, planning is a very difficult exercise in a mixed economy set up. The success of planning will depend upon;

Hence in the planning process the state has taken up the following steps to ensure the accomplishment of the objectives of the mixed economy,