The consequences of an Industrial dispute will be harmful to the owners of industries, workers, economy and the nation as a whole, which results in loss of productivity, profits, market share and even closure of the plant. Hence, Industrial disputes need to be averted by all means. 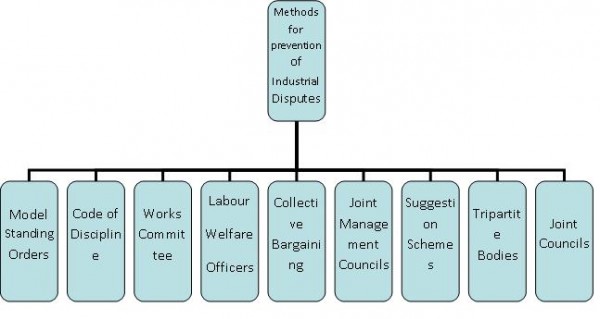 1. Model Standing Orders: Standing orders define and regulate terms and conditions of employment and bring about uniformity in them. They also specify the duties and responsibilities of both employers and employees thereby regulating standards of their behavior. Therefore, standing orders can be a good basis for maintaining harmonious relations between employees and employers.

Under Industrial Dispute Act, 1947, every factory employing 100 workers or more is required to frame standing orders in consultation with the workers. These orders must be certified and displayed properly by the employer for the information of the workers.

3. Works Committee: Every industrial undertaking employing 100 or more workers is under an obligation to set up a works committee consisting equal number of representatives of employer and employees. The main purpose of such committees is to promote industrial relations.   According to Indian Labor Conference work committees are concerned with:-

The following items are excluded from the preview of the work committees.

4.   Joint Management Councils: Just to make a start in labour participation in management, the govt: suggested in its Industrial Resolution 1956 to set up joint management councils. It consists of equal numbers of workers and employers (minimum 6 & maximum 12) decisions of the JMC should be unanimous and should be implemented without any delay. JMC members should be given proper training. JMC should look after 3 main areas:-

Representation of workers to the JMCs should be based on the nomination by the representation.

8. Labour welfare officer: The factories Act, 1948 provides for the appointment of a labour welfare officer in every factory employing 500 or more workers. The officer looks after all facilities in the factory provided for the health, safety and welfare of workers. He maintains liaison with both the employer and the workers, thereby serving as a communication link and contributing towards healthy industrial relations through proper administration of standing orders, grievance procedure etc.

9. Tripartite bodies: Several tripartite bodies have been constituted at central, national and state levels. The India labor conference, standing labor committees, Wage Boards and Industries Committees operate at the central level. At the state level, State Labor Advisory Boards have been set up. All these bodies play an important role in reaching agreements on various labor-related issues. The recommendations given by these bodies are however advisory in nature and not statutory.

Machinery for settlement of Industrial Disputes:

a) To hold conciliation proceedings with a view to arrive at amicable settlement between the parties concerned.

b) To investigate the dispute in order to bring about the settlement between the parties concerned.

c) To send a report and memorandum of settlement to the appropriate government.

d) To send a report to the government stating forth the steps taken by him in case no settlement has been reached at.

The conciliation officer however has no power to force a settlement. He can only persuade and assist the parties to reach an agreement. The Industrial Disputes Act prohibits strikes and lockouts during that time when the conciliation proceedings are in progress.

2. Arbitration: A process in which a neutral third party listens to the disputing parties, gathers information about the dispute, and then takes a decision which is binding on both the parties. The conciliator simply assists the parties to come to a settlement, whereas the arbitrator listens to both the parties and then gives his judgement.

There are two types of arbitration:

a)  Labor Court: The appropriate government may, by notification in the official gazette constitute one or more labor courts for adjudication of Industrial disputes relating to any matters specified in the second schedule of Industrial Disputes Act. They are:

Where an Industrial dispute has been referred to a labor court for adjudication, it shall hold its proceedings expeditiously and shall, within the period specified in the order referring such a dispute, submit its report to the appropriate government.

It is the duty of the Industrial Tribunal to hold its proceedings expeditiously and to submit its report to the appropriate government within the specified time.

It is the duty of the National Tribunal to hold its proceedings expeditiously and to submit its report to the central government within the stipulated time.