Several leadership theories including trait, behavioral, and contingency theories assume that the leader-member relations are consistent, with the leaders interacting with all subordinates homogeneously. But, Leader-Member Exchange Theory (LMX) asserts that leader-member relations are heterogeneous as leaders cannot distribute their limited resources and time to all the subordinates equally. Hence the leader develops unique dyadic relations with each member over a series of exchanges i.e. Vertical Dyadic Linkage Approach (VDL). Leader-Member Exchange Theory (LMX), also called the Vertical Dyad Linkage Theory developed by Graen and his colleagues suggests that leaders cultivate qualitatively different types of relations with different employees. The theory dictates that effective leadership processes takes place when leaders and followers develop mature partnerships and thus gain access to the mutual benefits of this relationship.

Leader-Member Exchange Theory (LMX) suggests that the leader develops different types of exchange relationships with the subordinates. This phenomenon is called ‘LMX differentiation’. LMX differentiation is defined as a process by which the leader engages in different types of relationships, ranging from high -quality to low-quality, with the subordinates. The quality of these relationships influences the subordinate and supervisor attitudes and behaviors. LMX theory argues that positive actions of the leader can stimulate a sense of indebtedness in subordinates leading to several positive effects on employee outcomes such as job satisfaction, job-performance, organizational citizenship behavior and possibly engagement.

The LMX relationship evolves in three stages: role-taking, role-making, and role-routinization. In role-taking, the relation begins with the initial interactions between dyads (supervisor and subordinate) and through these series of exchanges, mutual trust and respect is built. In the next step (role-making), supervisor selects a few subordinates with whom he/she continues to develop their relationship. Hereby, the exchange between the two parties becomes more social and less economical. At this stage, the leader and the subordinate are willing to go beyond the formal employment contract as, at this stage, the feelings of trust, respect and gratitude have developed towards each other. As subordinates perform their task, supervisors offer resources like support, autonomy and more challenging work assignments. Therefore, role-making is developed on mutual expectations and contributions of valued resources. In the last step (role-routinization), the exchanges between the supervisor and subordinate is maintained over a period of time through work together on different task but due to the limited resources of the leader, they develop and maintain high-quality exchanges with a select few subordinates. 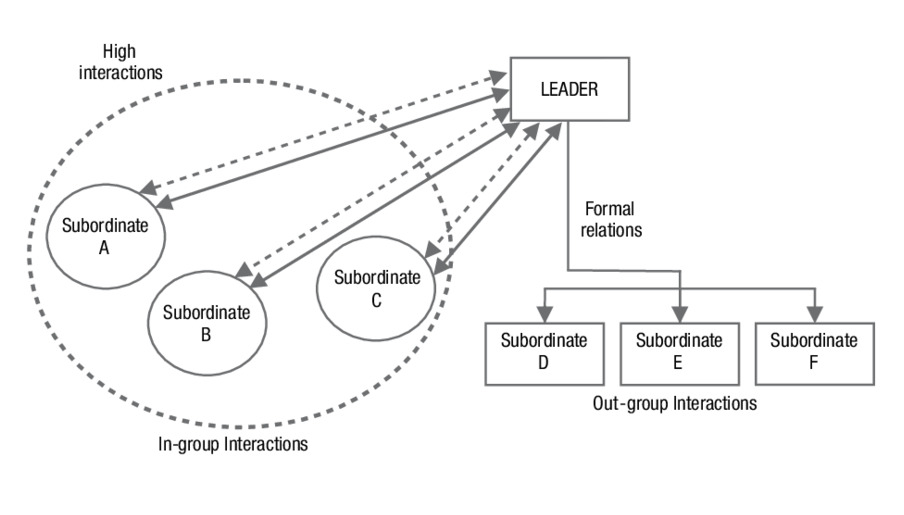 As leaders treat individual subordinates differently, two diverse groups of subordinates emerge: in-group and out-group. The in-group consists of a small number of subordinates who are trusted and favored by the leader after a series of exchanges. The quality of this relationship is high as the leader and the in-group members go beyond the formal work contract because of mutual liking, trust, respect and loyalty. The in-group gains the advantage of favorable support and resources from the relationship like autonomy in decision making, attention, greater job directions and more opportunities of social network.

Leader-Member Exchange Theory (LMX) states that the leader and the subordinate must provide something valuable to the other party, irrespective of whether the asset is tangible or intangible; both parties need to see the exchange as equitable. These exchanges between the leader and the subordinates can lead to obligations and create mutual interdependence. LMX impacts employee performance through a process of exchanges wherein the leader offers or eliminates tangible or intangible resources. Examples of intangible resources provided by the leader are loyalty, support, trust, respect and positive interpersonal exchanges. Whereas tangible resources include career progression, training opportunities, autonomy in decision making and challenging work assignments. These positive actions of the leader can create a sense of obligation or indebtedness in the subordinates making them repay the leader with higher levels of organizational commitment, competency, trust as well as engagement.