In today’s continuously changing world, globalization is what every business, organization, and nation should seek and welcome as a positive change. However, many people are unaware of the main focus and meaning of globalization, especially in comparison to localization. A large number of people believe that globalization is just another common word used to refer to changes and differences that cannot be explained. Therefore, many different activities or changes are improperly labelled to be a part of or caused by globalization. 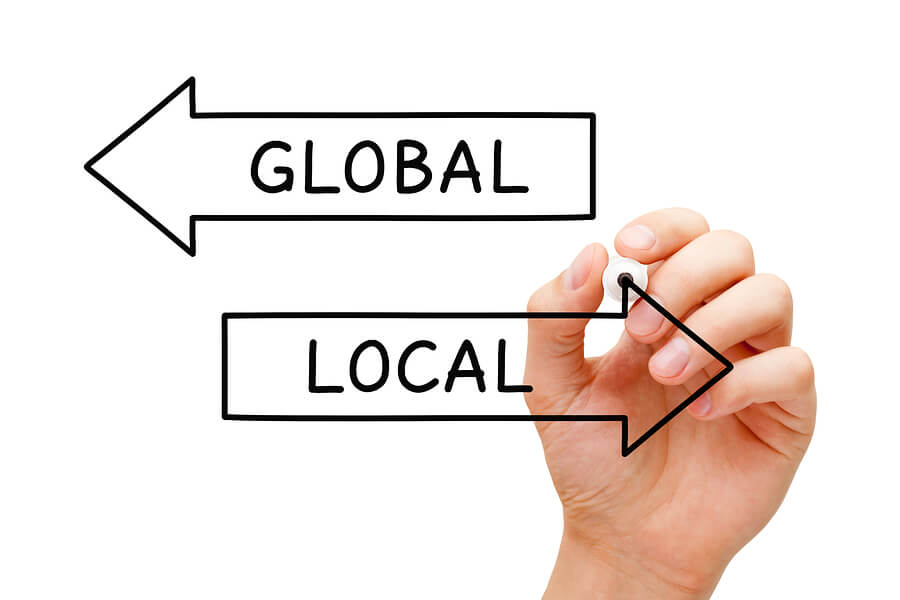 Localization is the process of adapting a product or service to a particular language, culture, and desired local preferences. Ideally, a product or service is developed so that localization is relatively easy to achieve – for example, by creating technical illustrations for manuals in which the text can easily be changed to another language. The process of first enabling a product to be localized and then localizing it for different national audiences is sometimes known as globalization. In localizing a product, in addition to language translation, such details as time zones, money, national holidays, local color sensitivities, product or service names, gender roles, and geographic examples must all be considered. A successfully localized service or product is one that appears to have been developed within the local culture.

Globalization can briefly be defined as ‘something’ that affects and changes the traditional arrangements. It is a term that directly implies change and therefore is a continuous process over a long period of time as compared to quickly changing into a wanted or desirable end business system. Globalization, focusing on a narrower scale, refers to sequences that occur in one’s mind or behavior that lead to processes that evolve as people or organizations pursue their daily tasks in a hopeful attempt to accomplish their specific goals.

Both globalization and localization have many costs and benefits, although not always considered when making decisions that significantly affect a group or country’s outcome. Two main benefits of globalization include it being a good way for a company to make more money and also initiate more openness between countries on the economic level. Moreover, other positive aspects of globalization include the increase in productivity and improvement in standards of living. On the other hand, the benefits of localization are more beneficial to a single state/country because it involves and allows a country to have its own specific national style of economic practices that reflect upon the country’s distinctiveness.

The costs of globalization mainly comprise of giving up a country’s distinction of its politics, culture, economy where as costs of localization involve less trade and international investment. Although many people view a decrease in a country’s involvement with trade and investment as a benefit, in the long run it is a cost because it denies the country the ability to communicate with other countries and to increase its technology and status (by importing and learning about other countries products). An increase in trade would also allow a country to advertise its products and abilities and export items to different countries with high odds of making a profit. Another cost of localization is its evolution from the pressures that lead organizations to narrow their horizons and participate in dissimilar forms of behavior not always accepted and approved by globally integrated countries. The costs of globalization are not weighed as heavily as those costs of localization because time will override many of the unavoidable problems. Therefore, globalization cannot be stopped and as the political and cultural changes occur, organizations with strong economic performances will survive, succeed and replace those less productive.

From an economic point of view, globalization focuses on the expansion of production and trade whereas localization focuses on more narrow and specific activities of consumers and producers. These two dynamics operate in all human activity from cultural and social to economic and political activities. From the social and cultural aspect, globalization attempts to extend its ideas and practices beyond its original and present setting whereas localization discourages new ideas, norms and practices.

In addition, these two sets of dynamics are linked in a way that it seems every change in globalization causes a change in localization and vice versa. Today’s world affairs and processes are greatly affected by the tensions between the different aspects and characteristics of globalization versus localization.

To conclude, the benefits of globalization discussed in this paper are far more important than its costs or the costs and benefits of localization. Although, localization and globalization will continue co-existing, globalization will continue to increasingly dominate over time because most countries are generally leading to and becoming more accepting of the idea of globalization. The benefits gained by globalization are the most important to people’s lives because it aides in the learning process of people expanding their horizons and understanding the benefits to countries, organizations, and groups working together. Although losing some part of one’s national identity can be a disadvantage at times, the advantages of being able to work together and help each other in a globally integrated world are much more.