The survival and progression of businesses in the 21st century is highly dependent on the ability of firms to expand beyond their national borders, taking into account the cost effectiveness of expansion and the complexity and risks associated with the company’s chosen international business strategy. The resources and objectives of a firm, as well as the demand for their product outside their national borders are important in taking the decision to globalize a company’s products and/or services. Although three strategies are more common, namely multi domestic, global and transnational approaches, the fourth strategy available to firms is the international approach to global expansion. This article will analyze the two approaches that differ in local responsiveness and cost pressure for the business, with the international approach as the least responsive and expensive for the company and the transnational approach as the most costly and locally focused from the four options available to companies. 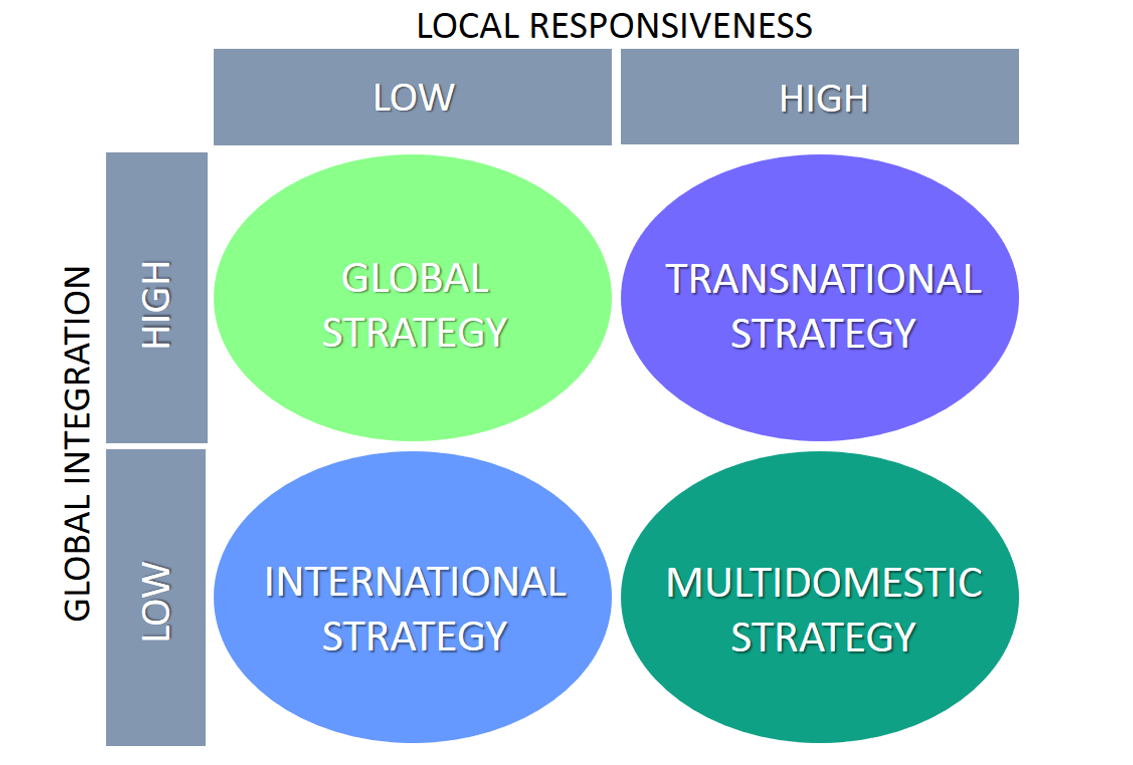 To start with, local responsiveness of multinational corporations is often a matter of mutual expectations of the company expanding into a region and the local customers’ demands and needs. For instance, food and beverage companies from the Western world (i.e. the US or the UK) expanding into Asian countries need to integrate certain products in their range that suit the demands of local consumers. As such, the role of the transnational approach is to enable companies from a culturally distinct country to penetrate a new market successfully. There are both positive and negative effects of the transnational approach. Developing a business model and manufacturing strategies is a costly process for any company and changing this for the purpose of integrating new products specific to a region is an additional financial pressure for multinational companies. Although the negative impact of local adaptation may deter some firms from adopting this strategy, the success of companies like McDonalds which take this approach proves that the additional costs can increase the chances of global success and the return on investment (ROI) for the company. The core advantage of the transnational approach is the potential of multinational firms to compete with local counterparts in a more effective manner through offering local products alongside their already established reputation. High levels of local responsiveness also ensures that the reputation in the new region contributes to the ethical image and the overall CSR of a multinational company. Large corporations are often accused of unethical conduct due to the cost competitiveness with the local providers, as international firms often perfect their manufacturing techniques in order to reduce all the time and resource waste, therefore allowing them to compete with local firms. An increasing number of countries have launched campaigns which promote local companies over the international competitors claiming that regional businesses understand the needs and desires of their customer base more, unlike the multinational firms. This underlines the importance of local responsiveness, as the resistance of local customers decreases when a multinational demonstrates a desire to first understand the locals’ behavior and adjust their strategy accordingly when entering a new region.

In spite of the important role and effect of the transnational approach, there are multiple companies which have succeeded despite their disregard of the local customers’ specific needs and desires. These companies opted for internationalization as a strategy for global expansion, relying on the recognizability of their brand name, logo, specific products, packaging, etc. A successful company which took this approach in their international expansion is Starbucks, who launched their very specific coffee shops across the world aiming to take over the market share of local coffee shops through offering a very specific experience, rather than focusing exclusively on the beverages offered. Although the local Starbucks coffee shops across the world offer some specific products, such as a variety of green tea products in Asian countries, the core product sold by Starbucks is the experience that customers enjoy alongside their chosen beverage. Whilst it was difficult at start for Starbucks to maintain a standardized approach to the design of their customer experience, taking over local coffee shop chains and their clientele has proven to be a successful tactic. This international approach therefore reduces the initial cost pressure through taking over a large share of the customers of former cafés in the local region and the premises which were built and used for an identical purpose. Rebranding the coffee shops in order to maintain a standard image is less expensive than building coffee shops from scratch, in addition to the existing customer base that the American giant is able to take over. In consequence, the role of the international approach as an expansion tactic is to allow companies to expand quickly, cost effectively and effortlessly. The effect of the tactic is a positive one from a financial viewpoint and, more often than not, a negative one from a reputation point of view, as citizens perceive this approach to disregard any specific cultural aspect of the region that multinationals penetrate.

It is, therefore, obvious that each of these two approaches have their advantages and disadvantages for the company aiming to explore a new region, the local competition and the customer base in the country. However, companies must take into account the impact of the global mobility of the workforce and the extent to which social media influences the demands of customers and the reputation of a multinational firm. The role and effect of both international business strategies are influenced by these elements, as consistency in a multinational’s approach is even more important in the light of individuals travelling on a regular basis for business and work purposes and the ability of people all over the world to share information via social media. In other words, a company must set their priorities from the onset of internationalization in order to maximize their earning potential and the international reputation through their chosen tactic for global reach. As a result of this, both the role and the effect of the international business strategies are enhanced in the long run, as companies are less able to change their view on the approach to conquering new regions. Well established Western companies must ponder over the decision of investing capital in the transnational approach, as their lack of success of competing against local companies could mean that their financial loss may never be recuperated. On the other hand, without an adaptation to the locals’ needs and desires an international company’s ability to succeed may be compromised, but the financial impact of this failure will not be as great as that supported by companies who invest capital in adaptation.

Companies must take into account all of the influencing factors, particularly those that stem from cultural elements of the destination country, when opting for an international business strategy. The gains of the company must be maximized through international expansion and the best solution is often dependent on the capital that the multinational is willing to invest in the their global strategy, as well as the market positioning of local competitors and the resistance of local consumers to new and international products or services. The emergence of social media also offers multinational companies an advantage, as the contact between individuals from distinct areas makes it possible for demand in one country for a particular brand to grow through online advertising of particular products. The international tactic is therefore made easy by the ability to promote a company through social media and export products, without any concern for local adaptation, through online shopping. On the other hand, the success of companies with brick and mortar shops in new region is significantly higher than that of companies that rely exclusively on online retail. In addition to this, not all regions have the same level of trust towards online shopping, as the security concerns in some regions are significantly higher, particularly when no efforts of local adaptation are made by the international firm.

In conclusion, the role and effect of international business strategies are crucial in the success of expanding a business beyond its national borders, but the potential of these can only be maximized when taking into account other elements that contribute to the internationalization, such as local culture, the demands, needs and wants of customer base targeted, etc. The impact of the chosen strategy must be thoroughly analyzed by a firm, as international strategies require consistency over time in the approach taken. In consequence, the advantages and disadvantages presented in this article must be weighed against the multinational’s company mission and their future plans in order to opt for one of the two extremes, transnational or internationalization approach, or the two other options in between, global or multinational approach.