Harry Markowitz developed a theory, also known as Modern Portfolio Theory (MPT) according to which we can balance our investment by combining different securities, illustrating how well selected shares portfolio can result in maximum profit with minimum risk. He proved that investors who take a higher risk can also achieve higher profit. The central measure of success or failure is the relative portfolio gain, i.e. gain compared to the selected benchmark.

Modern portfolio theory is based on three assumptions about the behavior of investors who:

Markowitz portfolio theory is based on several very important assumptions. Under these assumptions a portfolio is considered to be efficient if no other portfolio offers a higher expected return with the same or lower risk.

By using risk (standard deviation – Ïƒ) and the expected return (Rp) in a two-dimensional space, following figure presents portfolio combinations available to the investor. Thus, each point within the space enclosed by points XYZ, represents a certain portfolio. 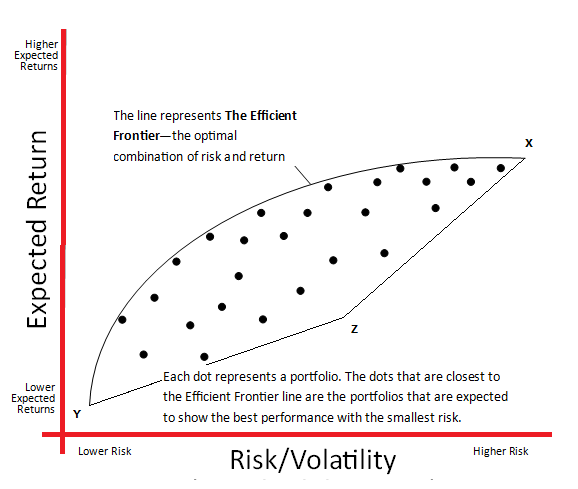 By analyzing the figure the conclusion can be drawn that in a new combination of securities the portfolio can be moved:

Markowitz constructed what is called the  efficient frontier. First, he combined all the stocks in the universe together into “two stock” portfolios. He observed that the risk-return line of each of the two stock combinations bent backwards toward the return (Y) axis. He then built “two portfolio” portfolios out of all the “two stock” portfolios. The risk-return line of these combination portfolios bent even further back toward the return (Y) axis. He kept combining stocks and portfolios composed of different weightings until he discovered at some point you get no more benefits from diversification. He called this final or “optimal” bent line the  efficient frontier. The efficient frontier represents the set of portfolios that will give you the highest return at each level of risk.

The efficient frontier has a curvilinear shape because if the set of possible portfolios of assets is not perfectly correlated the set of relations will not be a straight line, but is curved depending on the correlation.   The lower the correlation the more curved. 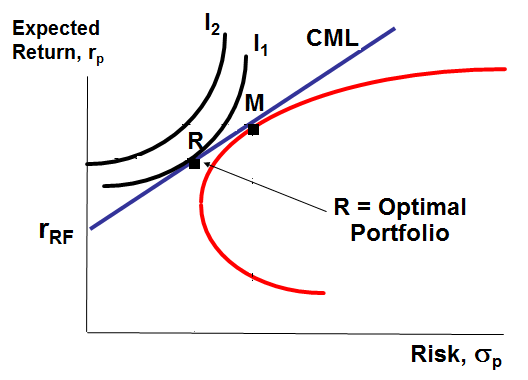 Investor’s utility curves are important because they indicate the desired tradeoff by investors between risk and return.   Given the efficient frontier, they indicate which portfolio is preferable for the given investor.   Notably, because utility curves differ one should expect different investors to select different portfolios on the efficient frontier.

An efficient portfolio is one that produces the highest expected return for any given level of risk.   Markowitz showed how to find the frontier of risk and returns for stocks. Only portfolios on the frontier are efficient.   Sharpe added the riskless asset return and noted that returns on a line connecting rrf and the tangency point on the efficient frontier was also “feasible” in the sense that portfolios consisting of some of the riskless asset and some of the market portfolio could be developed. 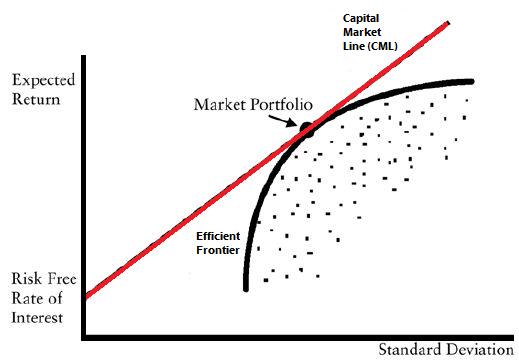 The introduction of a risk-free asset in the portfolio changes the Markowitz efficient frontier into a straight line.  He called that straight efficient frontier line  the Capital Market Line (CML), and he used indifference curves to show how investors with different degrees of risk aversion would choose portfolios with different mixes of stocks and the riskless asset.   Investors who are not at all averse to risk could borrow and buy stocks on margin, and thus move out the CML beyond the tangency point.  Since the line is straight, the math implies that any two assets falling on this line will be perfectly positively correlated with each other.

Two rational investors could hold portfolios at different points on the CML.   An extremely risk averse investor could hold only riskless assets, while someone who is not at all sensitive to risk but who wants to maximize expected returns could move on out the CML by buying stock on margin.

Note, though, that all rational investors would have a portfolio that is on the CML.   So, a highly risk averse investor would not load up on low-risk stock, nor would a “risk taker” load up on highly risky stocks.   Both would invest in the market portfolio and then increase or decrease risk by either buying the riskless asset or borrowing to buy more of the market portfolio.