Dell Inc. is one of world’ largest multinational technology corporation that manufactures sells and supports personal computer and other computer related. Dell was founded as PC’s Limited in 1984 by Michael Dell, with a start-up money totaling $1,000, when he was attending the University of Texas. Michael Dell started his business with a simple concept that selling computer systems directly to customer would be the best way to understand their needs and give them the most computing solutions. The first product of the company is a self-designed computer called Turbo PC which had lower prices than major brands. PC’s Limited was not a first company to do this but was the first to succeed, grossing $73 million in its first year trading. The company changed its name to Dell Computer Corporation in 1988. They tried to sell computer through stores in 1990 but was unsuccessful and they returned to sell directly to customers. Dell was included in Fortune Magazine as one of the world’s 500 largest companies in 1992. Four years later, Dell began to sell computer through its website. In 1999, Dell beat Compaq and became the biggest seller PCs in the US with $25 billion in revenue. In 2003, the company’s name was changed to Dell Inc. 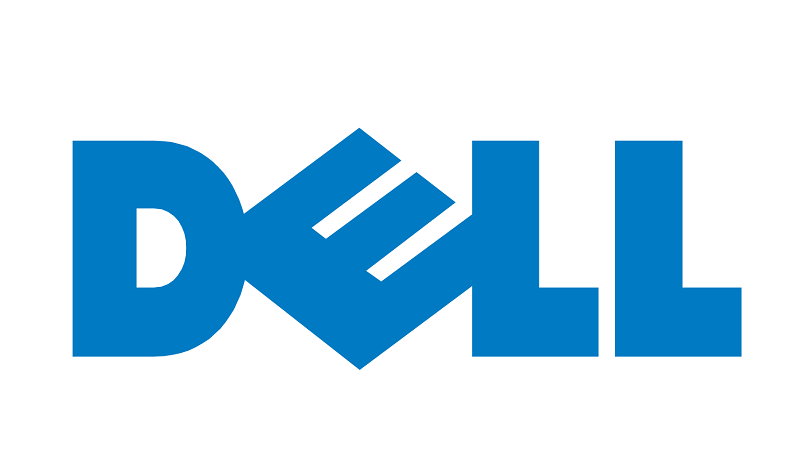 In June of 2005, Jeff Jarvis bought a Dell Lemon and paid a premium for four year in home service plan. He started to face problems with the machine immediately and he contacted Dell for fixing the problems, but there was no proper response from Dell. Dell did not provide good service to Jarvis and with no other option he posted his angry bust on poor Dell Service on his blog Buzz Machine titled “Dell lies. dell sucks”. His blog post generated severe criticism of Dell and other unhappy customers joined and the whole blogosphere started a critical discussion of poor quality of products and how bad is Dell Technical Support service. Dell which was already struggling with poor revenues and blogosphere criticism added fuel to the poor financial performance and hurt Dell reputation badly. The problem of poor customer service and quality of products was not new as Dell was not listening to the customer complaints for long and the blogs had just publicized and gave an opportunity for the aggrieved customers to vent their anger. Dell had the first hand experience how social media can impact the business and how critical it is to listen to customer complaints and fix them fast.

It took one year for Dell to realize the extent of damage caused by the blogs and forced the company to announce a new business plan, called Dell 2.0 in 2006 that included an additional $150m investment in their customer service. The investment included sales channels, both in sales contacts & its online presence, in its website front and back end and expand the scope of Dell Connect, which enables a Dell technician to take control of a customer’s system should they be encountering problems. In March 2006 a community outreach team was formed that included group of technical support experts with good interpersonal skills that listens, monitors and reaches out to bloggers around the world who have questions or may require assistance. Direct2Dell was launched in July, 2006 and in August Dell expanded blog outreach to include any conversations about Dell. Initially Direct2Dell blog was received with negative skepticism, but chief blogger Lionel Menchaca convinced bloggers that Dell was seriously listening to the bloggers and he diligently responded and linked to critics. Dell’s team staunched flow of bad buzz and by Dell’s measure negative blog posts about it have dropped from 49% to 22%. Dell even engaged external agency to monitors online conversations about Dell.

In February 2007 Dell launched IdeaStorm that allowed Dell users to provide feedback & valuable insights about the company and its products and vote for those they find most relevant. The Linux community used this platform and suggested Dell brought back XP as an option for customers who wanted it, reduced trialware and listen to customers discuss ideas in real time. StudioDell (January 07) is a place where Dell users could share videos about Dell-related topics and videos and podcasts were used to educate users on various emerging technologies and also offers tips, tricks and support to get the best out of a Dell product. Dell operated blogs and forums for dedicated customer engagement topics, joined Twitter (June 07) with a number of ids. Dell set up a centralized team, appointed a separate leadership and resources were taken from multiple teams (IT, online) to test and launch social engagement tools and websites quickly. This team had developed formal social media strategy and set of social media policies and governance were set in place.

In 2008 Dell social media presence started to yield results in terms of ROI and social media has become part of the business strategy and the various business units were provided specific targets for the social media. Employees were trained and encouraged to actively participate in various social media channels, provide customer support through blogs, twitter, etc and community managers who were responsible for listening and resolution, content planning, technology testing, planning, and measurement were named for various business units. Dell even went further with its social media initiatives a blog for the channel community was launched, online communities were launched for Dell’s environmental efforts called Regeneration and technophiles called Digital Nomads and social content appeared on Dell.com (homepage navigation, product pages with ratings & reviews). The Dell outlet, small business and home offers available on Twitter had $500,000 in revenues. Dell started a page focusing on SMBs and fan pages on Facebook.

In 2009, due to the recession pressure social media team had to reduce headcount which led to the departure of key people in the social media facing teams within the Dell. The departures had an impact on the Dell social media presence had seen consolidation in number of blogs & twitter accounts, slow down in response and lack of experience had further worsened the situation. But Dell managed to keep up and worldwide community has grown tomore than 3.5 million people across the social web, including places like Twitter, Facebook, Direct2Dell and IdeaStorm. @DellOutlet had close to 1.5 million followers on Twitter with $3 million in revenue and in total Twitter has resulted in more than $6.5 million in revenue. Dell launched the Dell Tech Center in 2009 to revitalize the brand and increase awareness of Dell’s solutions capabilities as customers valued a trusted advisor relationship.

Dell consolidated its social media strategy in 2010 with appointment of new leadership to the social media division and together with the old members of dell social media team Dell tried to regain its focus. Another effort from Dell to maintain its focus on social media was to open up a Social Media Listening Command Center in Austin Texas under the leadership of Chief Listening Officer where real-time data is collected and visualized by Radian6 and displayed across rows of monitors that show a unique dashboard, offering instant insights into things like customer sentiment, share of voice and geography. Dell also started on Customer Advisory Panel events with a goal to bring key customers and key advocates to Dell HQ in June 2010 to understand their delights and frustrations. Other DellCAP events were held in China in November 2010, in Germany in January 2011 and again in Round Rock in March 2011, focused on Sustainability topics. 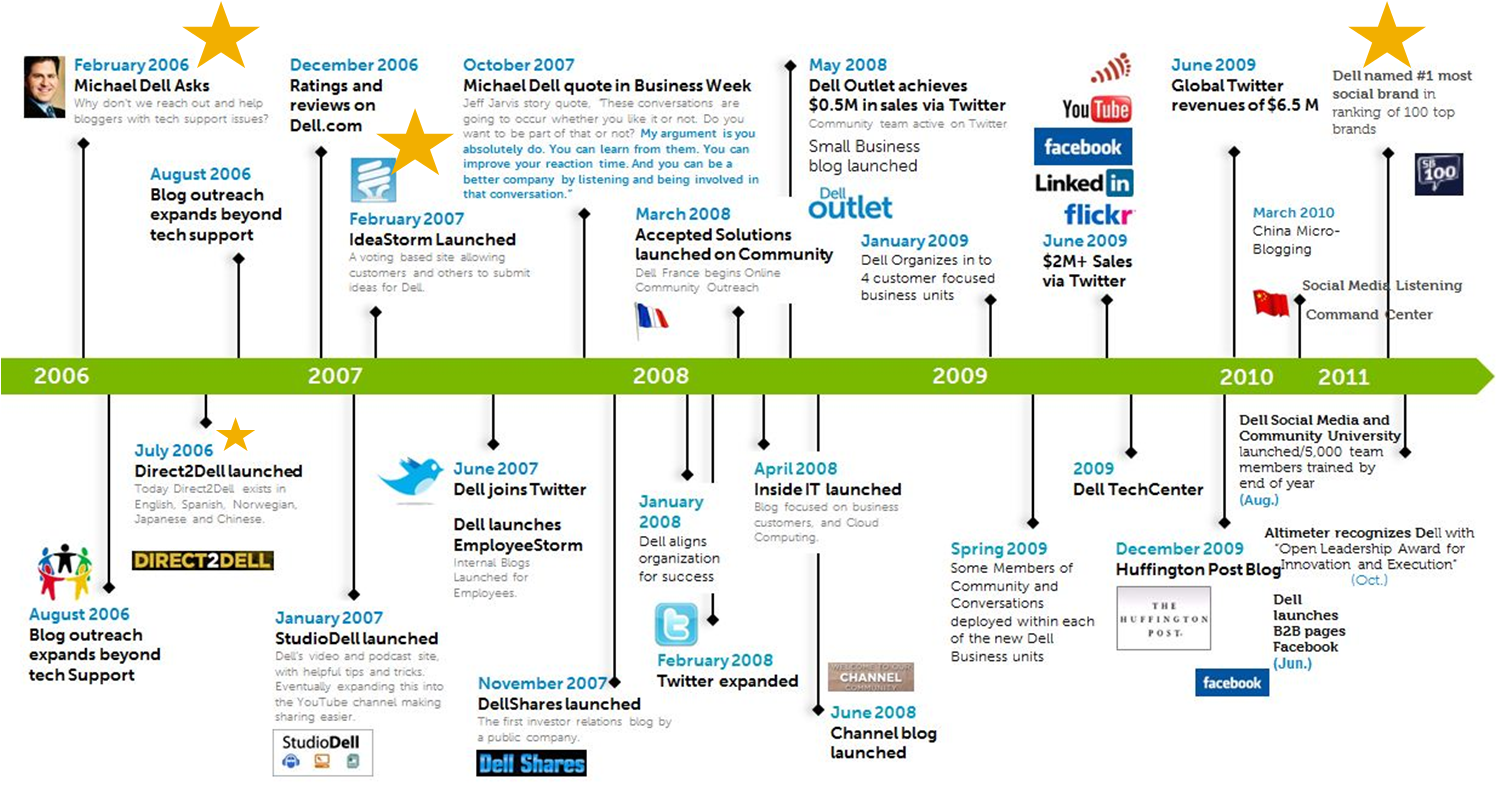 Dell continued to improve its social media presence in 2011 and Social Media Listening Command center is playing a critical role in these efforts. Dell is tracking 25,000 online mentions both posts and tweets about Dell every day and understand this information based on topics, sentiment, share of voice, geography, and trends and use it answer customer questions, address their concerns, build better products, and improve the overall customer experience. Dell has around 5000 employees trained as Social Media professionals and turned them into frontline social marketers who engage in Twitter, Facebook, LinkedIn, blogs, and more on the company’s behalf. Dell views employees’ social media participation as an asset rather than a liability and accordingly doesn’t restrict team members from utilizing mobile devices, apps or social media. Dell is using social media as a platform to support various campaigns and used it in the promotion of its first Customer Event Dell World and launched website, Techpageone.dell.com (Formerly EnterpriseEfficiency.com) which is a micro site featured daily, topical blogs written by InformationWeek editors and writers as well as Dell executives to gain insights.

Social media has provided an opportunity for Dell not only to interact with customers, understand their opinions and needs but also provided a marketing platform where in they can advertise their products, improve the brand image and loyalty and improve their revenues with rise in sales. Dell initially entered into social media not to sell its products but to respond to its customer complaints and feedback but customers wanted to access to special deals from its social feeds that link to products, reviews or discounts. Dell is committed to improving overall level of customer service continuously which is 24Ã—7 “always-on” customer service philosophy through social media and has made it a critical part of business strategy with clearly defined policy and is considered as on of the top companies in the world that is significantly profiting through the use of Social media.