When Jack Welch became CEO of GE in 1981, he set out to reenergize one of America’s largest companies. Through a revision of GE’s mission and values Jack Welch grew GE from a $24+ billion company to into a $74+ billion company, ready to face competitors and future challenges. Welch realigned goals and motivation, forcing managers to stretch to previously unknown limits. Any company not number one or two in their industry was divested or closed and though sometimes perceived to be a destroyer, he restructured GE into one of the world’s most staid corporations. 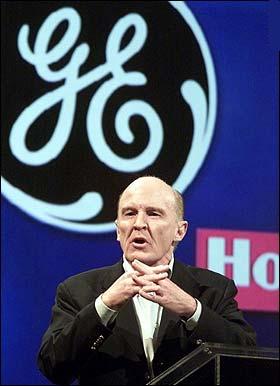 When Welch took over GE, he had a vision of creating an organization where people at all levels could be held responsible for their own work, and in the end make decisions for the betterment of their job. The goal was not to control workers, but instead to liberate them. Welch characterized this as creating a boundaryless organization in which empowered employees were self directed and motivated to effectively reach their goals. When Welch became the CEO of GE he found that the company was still organized the way it had been when GE was founded near the turn of the century. Specifically, it was represented by an overwhelming nine layers of management between the shop floor and the CEO. This bureaucracy lead to an unresponsive, inward focused company whose employees found great difficulty in communicating with one another. In fact, if GE’s massive cost structure was not dramatically restructured, analysts projected that GE would become unprofitable by the end of 1982  Welch addressed this issue by eliminating whole layers of management (see appendix for 1981, 1992 &1993 organizational charts), consolidating overlapping jobs and business units, and forcing employees at every level to take more responsibility for their own work. If something was not absolutely necessary they eliminated it (very much like Xerox did in “Dining at the Quality Restaurant”). They stopped gathering unnecessary financial data and eliminated unnecessary reports. In the past, it had not been unusual for business managers to request daily reports that contained so much detail that the reports often produced a 12-foot high stack of paper. The sheer mass of detailed information made a mastery of the details impossible thereby rendering the information relatively useless.

In the plant equipment operators became responsible for the quality of their own work,  reducing the need for inspectors. In effect, employees were given the ability to eliminate those aspects of their job that were unproductive and thus unnecessary. An important aspect of this has been the Work-Out, which has opened the communication channels necessary to help bring about innovative change (once again very much comparable to the training camps introduced by Xerox in its attempts to reinvent itself).

The Work-Out   has been an empowerment concept greatly favored by Welch. Thousands of GE employees get an opportunity to get together and share their ideas, thoughts and know-how, while building and fostering a more creative and team oriented atmosphere. The Work-Out encourages communication and accountability with the ultimate goal being to drive above average team performance. By providing each team member with the opportunity to contribute his ideas to the decision making process, Jack Welch’s hoped to stimulate individuals to constructively challenge their bosses and promote a more motivated workplace. All Work- Outs included follow-up meetings where previous commitments were discussed and accountability was enforced. Empowerment has been a two-way street. Employees have received the satisfaction of being able to air their concerns, while the company has greatly benefited from insights shared in the Work-Out. Under Jack Welch, GE began to realize that human beings are not machines and that each person has the potential to enhance productivity. Knowing how to use this resource can not only give the company a competitive edge, it can make each employee feel more important in the production process and thus more motivated. Although it is difficult to measure the results of empowerment, GE believes that the success of the company in the future will prove that it was the right decision to make. The key question therefore is to find out how leaders like Welch decide that empowerment is the right strategy and how they in general decide if it is the right strategy to implement at their companies. “Boundaryless behavior” and the elimination of unnecessary communication filters are the key phrases to describe Jack Welch’s attitude towards communication. He encourages input from every employee7, from the factory floor to the executive suite8. To facilitate goal setting and empowerment within GE, Welch needed to establish clear lines of communication in the organization. He realized that employees come to GE with many different experiences and backgrounds. He did not want to take away from the benefit of those various backgrounds, as much as reshape them with GE philosophies. This is not to say that he wanted a workforce of robots. Just the opposite actually, he wants free thinkers. One of his objectives was to motivate people to think outside the box and challenge the status quo. Open communication channels between Welch and his employees have been an important tool in this regard. These channels work in both directions, giving employees the ability to air their concerns and work towards a consensus for action. They also help motivate employees, because once again employees feel that they are directly contributing to the success of the company.

GE’s Work-Out process was created in 1988 as part of the ongoing drive for better productivity and efficiency. Initially, Work-Out was intended to identify and eliminate unneeded processes and tasks that were left over from previous years, when management had more layers. After restructuring, many groups did more work with fewer people, rather than making comprehensive operational changes. The aptly named Work-Out process involves identifying an area in need of improvement and bringing people together from all sides of the process (design, marketing, production, sales, etc.) to identify a better method. The Work-Out team meets outside of its normal work environment to discuss the issues and develop recommendations. Team recommendations are presented to the responsible managers, who must accept or reject proposals on the spot. Ideas that require further study are reviewed for a period of time agreed on by the team (usually less than a month) before a final decision is made. The process encourages responsive leadership and greater employee participation, which increases the rate of change throughout the organization. When Work-Out began, groups initially attacked the obvious things that didn’t made sense in the new GE, known as “low-hanging fruit”. As Work-Out evolved, customers and supplier-partners were introduced to the process. The Work-Out process is now part of everyday life at GE. In General Electric Jack Welch was   the OD practitioner. He brought so many changes like:

The Product Services initiative.Welch knew that GE’s manufacturing business would take the company only so far,as the market for huge-ticket items like jet engines was limited.In 1995,Welch made product services a top priority, helping to double GE’s product service business to $17 billion by 2000.

Work-Out:Welch’s second major company wide initiative (after Globalization) turned hierarchy on its head. Of the five company wide initiatives,Work-Out was Welch’s only cultural initiative and the one most responsible for changing attitudes and behaviors within GE.Work-Out ensured that managers listened to workers, giving employees a voice in decision making.Welch credited Work-Out with establishing the boundary-less culture that helped create GE’s “learning engine.”Work-Out was a seminal program that helped to bring an end to the type of scientific management methods that had ruled GE and other large companies for decades.Welch said that “Work-Out was nothing more complicated than bringing people of all ranks and functions–managers, secretaries,engineers, line workers, and sometimes customers and suppliers–together in a room to focus on a problem … and then act rapidly and decisively on the best ideas developed, regardless their source.”

Barriers during the changes

Anything that hampered performance or open communication was to be torn down.Welch’s initiatives were designed to erase the barriers that proliferate in large organizations: horizontal barriers, vertical barriers, and external barriers.Welch urged employees to “blow up” bureaucracy and knock down every boundary.Much of what he did in the 1980s, from delayering to Work-Out, was explicitly designed to remove debilitating barriers.Welch was fiercely committed to removing any speed bump that slowed the company down. His strategy of boundarylessness was specifically designed to remove the boundaries that separated GE workers from new ideas, customers, and each other.

There are two type of barriers.one is horizontal barrier & vertical barriers.

Re-shaping GE for the Future

While others are worrying about the next quarter, Jeff Immelt is planning years of explosive growth. He’s trying to recast GE for decades to come, spending big bucks to create the new infrastructure of innovation, beefing up GE’s global research facilities, overhauling the GE research center in Niskayuna, NY, investing in new, cutting-edge R&D centers in Bangalore, India, Shanghai, China and Munich, Germany.

The simple fact is that most of GE’s growth will come from outside the US. Jeff Immelt predicts that developing countries will account for 60% of the company’s growth in the next 10 years, vs. about 20% for the past decade.

To Jeff Immelt, the best managers are great marketers and not just great operators. Marketing is not just a matter of producing better commercials or catchy slogans – it means getting outside the company to understand markets and customers. Managers must look to lead industries rather than merely follow demand. And they must be leaders who are experts in their business and intensely passionate about what they’re doing.

Jack Welch’s attitude towards management boils down to a few very simple ideas: breaking down hierarchies, ensuring free information flows throughout the organization, and encouraging people to talk, listen and be open to new ideas. When he first became a GE vice president at the age of 36, he “stalked out on the plant floor, or picked up the telephone to deal directly with anyone at any level when a problem came up” and that is the organization Jack Welch has attempted to build in terms of communication. Welch succeeded in transforming a complacent behemoth into an energized company ready to face world competition. By flattening the organization and by removing unnecessary layers of bureaucracy, he liberated employees and empowered them to make decisions and effect their jobs, as well as the company as a whole. At the same time, he relied on stretch goals and the slope of satisfaction (as previously discussed) to further push the company to new levels of achievement. An additional sense of empowerment was relayed through various communication, training and motivation mediums, such as the “Work-Out”, “the Pit”, “the Corporate Executive Council” and other special project teams. Foremost he underlined his words with accompanying actions and an exemplary attitude, avoiding the well known saying that words by themselves are empty. Through the use of 360- degree review processes, appropriate bonus schemes and structural organizational changes, Welch created and opened communication channels at GE, allowing for unprecedented networking, teamwork, and openness to take place at GE. All of these factors combined to form a motivating force for the employees of GE. This motivation in turn has lead to a decade of outstanding performance by Jack Welch and General Electric Corporation.

One thought on “Case Study: General Electric’s Two-Decade Transformation Under the Leadership of Jack Welch”