Warren Buffett is the only billionaire in history to amass his fortune entirely through shrewd investing. He started investing with ten thousand dollars earned from a paper route and went on to become one of the wealthiest people in the world. Today his worth is staggering $30 billion. 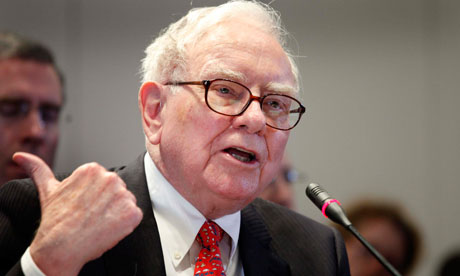 Warren Buffett was born on August 30, 1930 in Omaha, Nebraska. Since his early childhood, he has been fond of reading various kinds of investment books and The Wall Street Journal. He bought his first stock at age 11. He regretted later as he made delay in purchasing his first stock. At the age of 15, he had saved enough money to buy a 40 acre land from his father at Nebraska. By the age of 20, his fortune was estimated $9800 and it was about $68000 in inflated dollars at the end of 1999.

Buffett completed his degree from University of Nebraska, Lincoln. In 1950, Buffett applied to Harvard Business School but was rejected in a 10 minute interview. Then Buffett joined to Columbia Business School and he graduated a year later with a master’s degree in economics. During his tenure in Columbia University, Buffett came across Benjamin Graham whose lessons grounded on premise that stocks should reflect the inner worth of a company and that superior returns could be experienced by buying undervalued securities, coursed through Buffett like a lightning bolt. After Graduation, Buffett worked as a stock salesman for his father until 1954. After three years of pestering, Graham hired Buffett to work at his investment management company, Graham Newman. But Graham shuttered the company two years later and retired. Buffett returned to home with net worth estimated $140000.

Buffett started an investment pool with $100 of his own money and persuading family and friends to contribute $105000. Buffett found that he could buy a significant position in an undervalued company, demand a board sit, take a leading role in righting the company’s financial problems and then assist management in selling the company for a higher price than Buffett paid. The most famous of these control investments was a textile mill called Berkshire Hathaway. From this point forward, Buffett’s fortunes were inextricably linked to Berkshire but he could mostly control it. If he could continuously increase the intrinsic value of Berkshire, he could ultimately enhance his own net worth. Through Berkshire Hathaway, Buffet invested in many stocks and owned many companies which led to the tremendous growth in his fortune. The strategy through which Buffet picked the stocks and the way, Buffett analyzed the company and invested in them which in turn helped to make his fortune are discussed below:

1. Warren Buffett gives the tremendous importance to the power of compounding. No force exerts more influence on portfolio than time. Time takes a bigger toll on terminal wealth than do taxes, inflation and poor stock picking combined. The longer that money can compound, the larger the sum will be. The rate of return attained acts as a lever that magnifies or minimizes the ultimate wealth. Adding just a few percentage points a year to overall returns can have unfathomable consequence to the wealth. Choosing good companies at fair prices seldom has produced losses for investors willing to wait patiently for the stock price to track the growth of the company. The power of compounding begins working its magic as the year progresses and allows net worth to gather momentum and increase value by greater and greater amounts. Buffett has been occasionally criticized for not donating more of its wealth to his shareholders. But Buffett’s reasoning is perfectly consistent with his investment philosophy. As long as he can continue to compound money at great rates, society would be better off if he didn’t give away money now. He is behaving as any rational CEO would. If a company generates high return on its assets, it should withhold dividends to investors and plow as much money as it can each year back into business. Only when it can no longer generate a strong internal return should a company think about returning money to shareholders.

2. Investors should never accept average returns because that’s the best they will ever attain. They should instead seek ways to magnify their yearly returns. Adding a few percentage points of gain each year compounds into huge amounts over time. The return will be much higher if the stocks are bought when market underpriced the company. An undervalued security must eventually rise in price and an overvalued security must fall. The immutable law of mathematics ultimately will bestow higher returns upon stocks more apt to rise than fall. In order to enhance return, stocks must be bought at the lowest possible price. The lower the price paid, the higher the expected returns. Warren Buffett is also insisting on price be linked to growth and quality. Investors tend to be irrational and forever willing to overpay for glamour stocks and follow the crowd when stocks crash. They also have psychological penchant for avoiding stocks that decline in value. Some investors also think that diversification is the best strategy to avoid losses when market is down.   However, diversification is the bane of high returns. A properly diversified portfolio is one that eliminates non-systematic risks, the risk that a single stock can cause material disruptions to returns. A large portfolio merely reduces the probability of loss but it does not reduce systematic risk, the risk of an unforseen event causing the entire stock market to drop.

3. The goal of every investment is to maximize the total return on investment. Every dollar spent by an enterprise on a capital project must generate the highest possible return. Every dollar spent on a single item is a dollar unavailable for other items. The dollar must provide a suitable return measured against what could have been earned on that dollar somewhere else.

4. Warren Buffett detests rapid trading. To him, it’s a money wasting activity that usually leads to inferior returns for investors. Further, it causes wide disparities in pricing that may prompt management to take unnatural or irrational actions to stem investors’ biases. Certainly many investors who casually buy and sell stocks online a few times a week may believe they are on the road to success but their success is due only to the extraordinary persistence of the bull market, not to their own acumen. Lured by fabulous success of internet stocks and by the advent of online trading, many have concluded that it’s a breeze to amass a small fortune by hitting a few key strokes each day. But Buffett is so confident in his stock picking ability that he wants to continue holding an investment perpetually. Rather than lull himself into believing he can win by continually darting in and out of the market, Buffett believes he can earn and retain more money picking a few choice companies and letting them grow over time.

5. The game of investment is a game of probabilities. An investor needs to quantify risks, make mental calculation of potential return, stir up those assumptions in a pot and produce a stock picking strategy that works the majority of the time. Too much analysis, however, inevitably leads to trouble. There comes a point at which stock picking systems break down and prove futile because they are too complicated. Warren Buffett is keenly aware of the limitations of data and shuns most artifices routinely used by professional investors today. He has not hurt himself by shunning basic tools. His lack of resources has probably served him better than if he had operated Bloomberg Terminals, Quotrons or statistical software packages. The more components one adds to one’s investing model, the more complicated one makes the stock picking system and the more often it will fail. Because the probability of errors multiplies as fast as one adds more layers of details to the analysis, he or she will learn to avoid relying on models that use numerous variables especially models based on future forecasts. This is the chief reason value investors such as Warren Buffett have little use for market forecasts or extravagant stock picking systems.

6. The stock market fires thousands of pitches a day, with each pitch representing a certain stock at a certain price. One should avoid situations where chances of success are even at the best. Instead, one should concentrate on investments where one has high confidence in earning a profit. Warren Buffett, like many other great investors, avoids the temptation of buying a stock that seems alluring at the moment simply because he has surplus cash in his hand. Any stock can be potentially be a value if the price is right, but Buffett does not allow himself to be fooled into buying stocks just because they are undervalued. Buffett avoids this trap by identifying all the stocks he wishes to own over the next several years and buys them one at a time, but only when they fall to an attractive price. If the stocks do not fall to his desired price immediately, he does not take any action. He knows that the odds favour a decline in price sooner or later. In the interim, he will devote his attention to other desirable companies whose price may already have fallen to appealing levels.

7. Every business possesses an intrinsic value that reflects both the long term earning power of the enterprise and the risks of holding the investment over time. Intrinsic value is dynamic and it changes with time. But a firm’s value should be equal to what it can earn over its eternal lifetime and adjusting earnings for inflation and time value of money. For a cyclical company, future earnings can be determined by taking average earnings in the past year while for a steady growth company, future earnings will determined by estimating the growth rate and interpolating the growth rate in future. Appropriate risk free rate should be taken as discount rate while valuing a company. If the investment in a particular stock can’t yield a return that can beat a bond’s yield, it’s better to invest in the bond.

8. Buffett’s book value scorecard clearly ranks him among the top CEOs of the twentieth century. A company can grow its book value by simply issuing more shares, by acquiring other companies or by letting profits sit in the bank and drawing interest. These should be taken into account during calculation of a company’s book value.

9. Return on Equity (ROE) plays an important role in analysing companies and putting stock prices and valuation levels in proper context. Most investors tend to concentrate on company’s past and projected earnings growth. However, a company’s ability to produce high return on owners’ capital is equally as crucial to long term growth. Buffett believes that companies that can generate and sustain high ROEs should be coveted because they are relatively rare. They should be purchased when their stocks trade at attractive levels relative to their earnings growth and ROEs because it is extremely difficult for companies to maintain high ROEs as they increase in size. Before Buffett buys shares of a company, he makes sure the stock is capable of returning at least 15% a year for him over a long period.

10. Warren Buffett craves consistency because it helps remove risk from a stock portfolio. Research has shown that a consistent track record of performance tends to result in consistent share price growth. A company with a long track record of stable performance is much more likely to have a stable stock price than a company whose growth streak is pockmarked with sharp gain and losses.

The essence of successful investing can be summarized by two rules: