The Ohio studies led to two dimensions of leadership behavior-concern for tasks and concern for relations. Almost in the same style, the Michigan University studies made the distinction between job-centered and production-centered leaders. Blake and Mouton rated these concepts in a framework called the Managerial Grid. They interpreted the concepts in a broad way. Blake and Mouton have used “Concern for Production” and “Concern for People'” in their Managerial Grid on horizontal and vertical axes respectively. Managers may be concerned for their people and they also must also have some concern for the work to be done. The question is, how much attention do they pay to one or the other?

Managerial Grid Model  is a model defined by Blake and Mouton in the early 1960s.It included 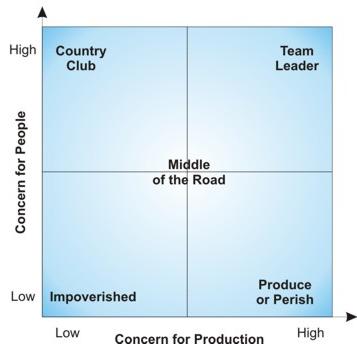 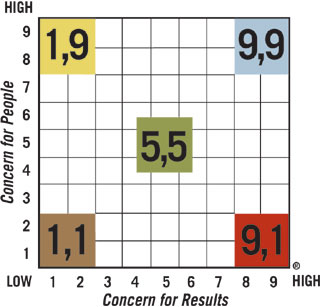 In this style, managers have low concern for both people and production. Managers use this style to avoid getting into trouble. The main concern for the manager is not to be held responsible for any mistakes, which results in less innovative decisions. A leader uses a “delegate and disappear” management style. Since they are not committed to either task accomplishment or maintenance; they essentially allow their team to do whatever it wishes and prefer to detach themselves from the team process by allowing the team to suffer from a series of power struggles.

This style has a high concern for people and a low concern for production. Managers using this style pay much attention to the security and comfort of the employees, in hopes that this would increase performance. The resulting atmosphere is usually friendly, but not necessarily that productive.

This person uses predominantly reward power to maintain discipline and to encourage the team to accomplish its goals. Conversely, they are almost incapable of employing the more punitive coercive and legitimate powers. This inability results from fear that using such powers could jeopardize relationships with the other team members.

3. The produce or perish style (9, 1). The Controlling Leader (Direct & Dominate)

This believes in the authority-obedience. With a high concern for production, and a low concern for people, managers using this style find employee needs unimportant; they provide their employees with money and expect performance back. Managers using this style also pressure their employees through rules and punishments to achieve the company goals. This dictatorial style is based on Theory X of Douglas McGregor, and is commonly applied by companies on the edge of real or perceived failure. This is used in case of crisis management.

People who get this rating are very much task-oriented and are hard on their workers (autocratic). There is little or no allowance for co-operation or collaboration. Heavily task-oriented people display these characteristics: they are very strong on schedules; they expect people to do what they are told without question or debate; when something goes wrong they tend to focus on who is to blame rather than concentrate on exactly what is wrong and how to prevent it; they are intolerant of what they see as dissent (it may just be someone’s creativity), so it is difficult for their subordinates to contribute or develop.

It is Organization – Man management approach, which believes that the adequate organization performance is possible through balancing the necessity to get out work with maintaining morale of people at satisfactory level. Managers using this style try to balance between company goals and workers’ needs. By giving some concern to both people and production, managers who use this style hope to achieve acceptable performance.

This is based on the aspect that work accomplishment is from committed people; interdependence through a common stake in the organization purpose leads to relationships of trust and respect. In this style, high concern is paid both to people and production. As suggested by the propositions of Theory Y, managers choosing to use this style encourage teamwork and commitment among employees. This method relies heavily on making employees feel as a constructive part of the company.

This type of person leads by positive example and endeavours to foster a team environment in which all team members can reach their highest potential, both as team members and as people. They encourage the team to reach team goals as effectively as possible, while also working tirelessly to strengthen the bonds among the various members. They normally form and lead some of the most productive teams.