A group can be defined as two or more interacting and interdependent individuals who come together to achieve specific goals. Although a groups often have goals, but there’s not state that group members must share a goal or motivation.

Many people used the word team and group interchangeably, but there are actually many differences between the word team and group. It is much easier to form a group than a team. In group, they could be grouped according to gender, experience, age or other common factors. Although the effectiveness of the group may be variable, but forming a group just based on a certain commonality is not particularly difficult. A group’s strength may come from sheer volume or willingness to carry out a single leader’s commands. On the other hand, a team can be more difficult to form. The members will selected for their complementary skills, not a single commonality. In a team, each member has a purpose and a function. So the overall success depends on a functional interpersonal dynamic. When working together in this way, there is usually not as much room for conflict. A team’s strength depends on the commonality of purpose and inter-connectivity between individual members.

There are two types of group which is formal group and informal group. Formal group will designated work assignments and specific tasks directed at accomplishing organizational goals and defined by an organization’s structure. There are four examples of formal work groups:

While informal groups are group-based social elements. These groups occur naturally in the workplace and is more concerned with friendship and common interests. A friendship group is friend who do many activities together and it is relatively permanent and informal, and its benefits from the social relationship among its members. Meanwhile, the common interest such as bowling group and women’s network is relatively temporary and is organized around an activity or interest shared by its members. 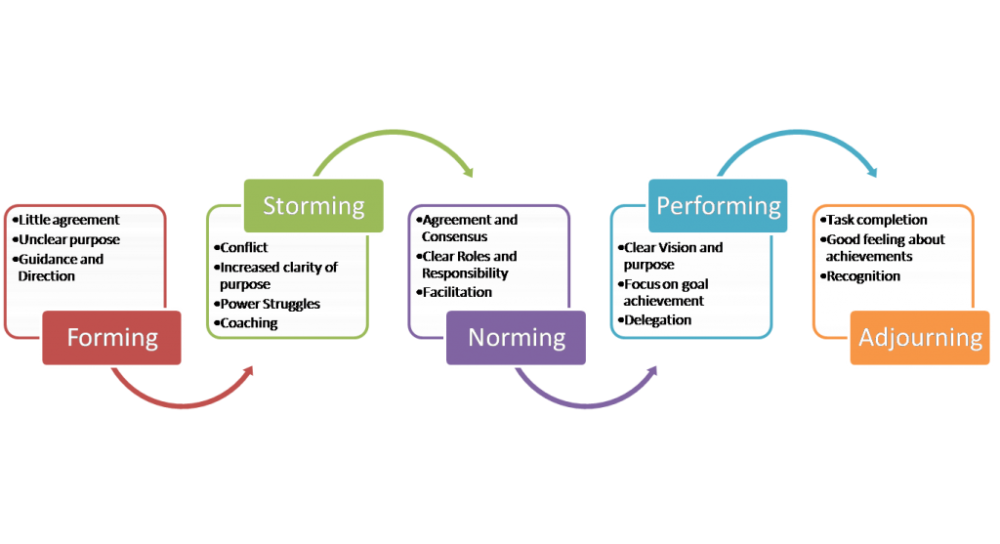 Forming stage is the first stage in group development. This stage has two phases. In a formal group, people join because of some work assignment. The second phase begins when the people joined the formal group. Then these people define the group’s purpose, structure, and leadership. This stage is complete when members begin to think of themselves as part of a group.

When group members get to know each other better, the storming stage begins. This storming stage named because of the intragroup conflict that occurs over who will control the group and what the group needs to be doing. This stage is characterized by a bid for power. There are six characteristics of the storming stage which is competition, strained relationships, leader is challenged, tension and disunity, differences are uncomfortable, and the issues of autonomy vs. control support vs. competition influence decision-making. When this stage is complete, there is a relatively clear hierarchy of leadership and agreement on the group’s direction.

The norming stage is one in which close relationship develop and the group become cohesive and has begun to be effective. There’s now a strong sense of group identity and camaraderie. This stage will be complete when the group structure has been assimilated as a common set of expectations about behavior and become solid. There are some characteristics about this stage :

The fourth stage of group development is performing. Many groups never reach the performing stage.  This is the stage at which would be an excellent customer service and to create an impressive examples. The group structure is in place and accepted by group members. In this stage, characteristics include productivity, full development of the potential of the group and the individuals in the group, harmony and effective problem-solving. This is the last stage of development for permanent work groups.

The final stage is adjourning. In this stage, the group prepares to disband. Group members will react in some way that is independent of a confident and excited about the performance of their group. While, others may be sad over the loss of camaraderie and friendship. That’s why more attention is focused on wrapping activities rather than task performance.