Control means, “Some sort of systematic effort to compare current performance to a predetermined plan of objective, presumably in order to take any remedial action required”. This is a very general definition of the term. However, as a management function, it has been defined as “the process by which managers assure that resources are obtained and used effectively and efficiently in the accomplishment of the organization’s goals”. 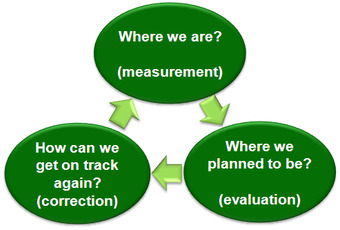 Controlling is tool for achieving organizational goals and activities. Control is management’s planning, implementation, evaluation, and correction of performance to ensure that the organization meets its objectives in the short, medium and long terms.

From these definitions, it could be deduced that control, one of the managerial functions like planning, organizing, etc. is an important function because it helps ensuring that the planned goals are attained through a system of checks, monitoring, corrective actions and forward thinking so that errors are removed, and corrective actions taken timely so that deviation from standards are minimized, if not eliminated.  According to modern concepts,  control  is a foreseeing action, whereas the earlier concept of  control  was used only when errors were detected.  Control function of management means setting standards, measuring actual performance and taking corrective action. Thus, control function of management comprises these three main activities.

A control system is necessary in any organization in which the activities of different divisions, departments, sections, and so on need to be coordinated and controlled. Most control systems are post-action-oriented or feed-back control type and consequently are inefficient or fail. For example, there is little an employee can do today to correct the results of actions completed two weeks ago.

Steering control or feed-forward control system, on the other hand, is future-oriented and predict adjustments to be made to put back on remedial course before the outcome drifts from planned scheme.

In between there is a system of control called concurrent or real time control, which make corrective courses made continuously as executions happen. But, there is no forward stretch to predict possible mishaps in the later phases, due to current actions and having a plan to stop such mishaps from happening.