John Maynard Keynes, one of the most influential economists of the 20th century, never worked out a pure theory of trade cycles, though he made significant contributions to the trade cycle theory. Keynes states, “The trade cycle can be described and analyzed in terms of the fluctuations of the marginal efficiency of capital relatively to the rate of interest.” According to Keynes, the level of income and employment in a capitalist economy depends upon effective demand, comprising of total consumption and investment expenditure. Changes in total expenditure will imply changes in effective demand and will lead to changes in income and employment in the country. Therefore, in the Keynesian system fluctuations in total expenditure are responsible for fluctuations in business activity. Now, according to Keynes, consumption expenditure is relatively stable, and consequently it is the fluctuations in the volume of investment that are responsible for changes in the level of employment, income and output.

The following Figure shows how trade cycle depends upon the marginal efficiency of capital, which according to Keynes, is the villain of the piece. The substance of Keynesian Theory of Trade Cycles  is that an initial investment outlay will generate multiple amount of income and employment under the influence of the multiplier and acceleration effects. On the other hand, contraction of investment will similarly lead to multiple contractions of income and employment. But whether a fresh investment will be undertaken will depend upon the marginal efficiency of capital. We can explain these points a little more elaborately. 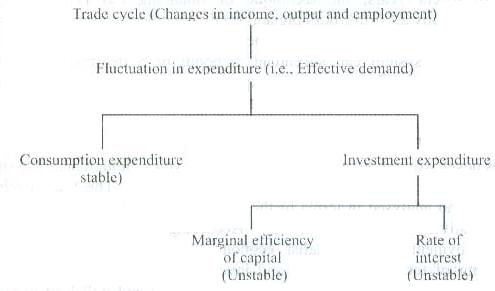 Let us start at the bottom of a depression. At this point, the marginal efficiency of capital will be high due to exhaustion of accumulated stocks and necessity to replace capital goods. At the same time, the rate of interest may be low because of large cash balances with commercial banks or due to fall in the public liquidity preference. As a result, the entrepreneurs may borrow funds from banks and make fresh investments. Under the impact of the multiplier and acceleration effects, the process of increased investment and employment gets an upward trend. There is heavy economic activity everywhere in the primary, secondary and tertiary sectors of the economic system. This sudden shoot in investment activity gives rise to boom and as long as it lasts, the economic situation appears very easy and bright. 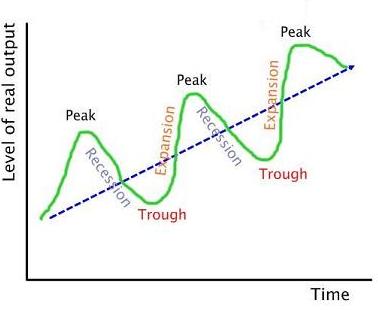 How the Boom Crashes?

The boom conditions themselves contain the very seeds of their own destruction. Very soon goods are accumulated beyond the expectations of entrepreneurs and competition among them to dispose their accumulated stocks bring crash in prices. While the prices of finished goods are declining, their costs of production continuously rise because factors of production are becoming scarce and hence are commanding higher prices. The marginal efficiency of capital is sandwiched between rising costs of production on the one side and falling prices of finished goods in the other hand. The marginal efficiency of capital, therefore, collapses and brings about a crash in the investment market.

Ineffectiveness of the Rate of Interest

Weaknesses of the Keynesian Analysis

Keynes’ theory of the trade cycle has been regarded as quite convincing since it explains exactly the cumulative processes, both in the upswing as well as in the downswing. Besides, Keynes’ advocacy of fiscal policy to bring about business stability has been widely used. However, critics have found some weaknesses in the Keynesian Theory of Trade Cycles. First, according to Keynes, marginal efficiency of capital is the most important factor that guides the investment decisions of the entrepreneurs. However, this important factor depends on entrepreneurs’ anticipation of future prospects that further depend upon the psychology of investors. If   such a case, Keynes’ theory of trade cycles approaches close to Pigou’s psychological theory, which assumes that the changing assumptions of entrepreneurs regarding future market conditions play a key role in the cyclical fluctuations of capitalist reproduction. Secondly, in Keynes’ theory, the rate of interest plays a minor role. Keynes expresses the opinion that sizable fall in the rate of interest can do something to revive the confidence among the entrepreneurs by exerting pressure on the cost of production. However, Keynes himself has pointed out that this has been sufficiently proved to be correct that the rate of interest does not have any influence on investment. Thirdly, his theory does not throw light on the periodicity aspect of the trade cycle.