Suppose you want to buy mangoes at Rs.100 per dozen you buy 6 dozens. If the price of mangoes increase to 200/- then how much will you buy? Definitely less quantity of goods. What kind of relationship is there between the price and quantity demanded? There is inverse relation.

The  law of demand explains the functional relationship between price of a commodity and the quantity demanded of the same. It is observed that the price and the demand are inversely related which means that the two move in the opposite direction. An increase in the price leads to a fall in the demand and vice versa.

The law of demand states that “Ceteris paribus (other things remaining the same), higher the price, lower the demand and vice versa”.

The basic assumptions of Law of Demand are;

The  demand  curve is downward sloping, indicating the negative relationship between the price of a product and the quantity demanded.  For normal goods, a change in price will be reflected as a move along the demand curve while a  non-price change  will result in a shift of the demand curve. 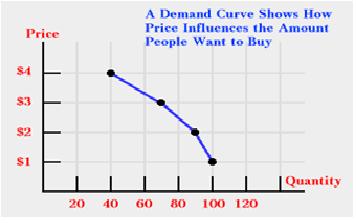 So by observing a demand curve the chief characteristics are;

Reasons underling the law of demand – this inverse relationship can be explained in terms of two reasons, viz,

Exceptions of Law of Demand