The profit  maximization  theory states that firms (companies or corporations) will  establish factories where they see the potential to achieve the highest total profit. The  company will select a location based upon comparative advantage (where the product can  be produced the cheapest). The theory draws from the characteristics of the location site,  land price,  labor  costs, transportation costs and access, environmental restrictions, worker  unions, population etc. The company will then elect the best location for the factory to  maximize  profits. This is anathema to the idea of social responsibility because firms will  place their factory to achieve profit  maximization.  They are nonchalant to environment  conservation, fair wage policies and exploit the country. The only objective is to earn more  profits. In economics, profit  maximization  is the process by which a firm determines the  price and output level that returns the greatest profit. There are several  approaches to profit maximization.

To obtain the profit  maximizing  output quantity, we start by  recognizing  that profit is  equal to total revenue (TR) minus total cost (TC). Given a table of costs and revenues at each  quantity, we can either compute equations or plot the data directly on a graph. Finding the  profit-maximizing  output is as simple as finding the output at which profit reaches its  maximum. That is represented by output Q in the diagram.

There are two graphical ways of determining that Q is optimal. Firstly, we see that  the profit curve is at its maximum at this point (A). Secondly, we see that at the point (B)  that the tangent on the total cost curve (TC) is parallel to the total revenue curve (TR), the  surplus of revenue net of costs (BC) is the greatest.  Because total revenue minus total costs  is equal to profit, the line segment CB is equal in length to the line segment AQ.

Computing the price, at which the product  should be sold, requires knowledge of the  firm’s demand curve. Optimum price to sell the product is  the price at which quantity  demanded equals profit-maximizing  output. 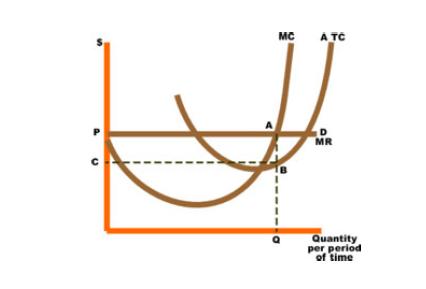 The intersection of MR and MC is shown in the next diagram as point A. If the  industry is perfectly competitive (as is assumed in the diagram), the firm faces a demand  curve (D) that is identical to its Marginal revenue curve (MR), and this is a horizontal line at a  price determined by industry supply and demand. Average total costs are represented by  curve ATC. Total economic profit are represented by area P,A,B,C. The optimum quantity (Q)  is the same as the optimum quantity (Q) in the first diagram.

If the firm is operating in a non-competitive market, minor changes would have to be  made to the diagrams. For example, the Marginal Revenue would have a negative gradient,  due to the overall market demand curve. In a non-competitive environment, more  complicated profit maximization solutions involve the use of game theory.

In some cases, a firm’s demand and cost conditions are such that marginal profits are  greater than zero for all levels of production. In this case, the MÏ€ = 0 rule has to be modified  and the firm should  maximize  revenue. In other words, the profit  maximizing  quantity and  price can be determined by setting marginal revenue equal to zero. Marginal revenue equals  zero when the marginal revenue curve has reached its maximum value. An example would  be a scheduled airline flight. The marginal costs of flying the route are negligible. The airline  would  maximize  profits by filling all the seats. The airline would determine the profit maximum  conditions by  maximizing  revenues.

In addition to using the above methods to determine a firm’s optimal level of output,  a firm can also set price to  maximize  profit. The optimal markup rules are:

Where MC equals marginal costs and Ep equals price elasticity of demand. Ep is a  negative number. Therefore, -Ep is a positive number.

The rule here is that the size of the markup is inversely related to the price elasticity  of demand for a good.