The SCP paradigm assumes that the market structure determines the conduct of the organization. This conduct, in turn, is the determinant of market performance. Examples of market performance include efficiency, profitability and growth. The Structure Conduct Performance Framework seeks to establish that certain structures of the industry can lead to certain kinds of conduct or behavior which then leads to various types of economic performance. The SCP paradigm was developed through evaluation of empirical studies involving American industries. Theoretical models were not used to support the paradigm. The conclusion that was drawn from empirical studies was that market structure determined performance. This is caused by the belief that the laws of competition should not be based on behavioral models but rather on structural remedies. According to J.S. Bain who developed the paradigm in the 1950s, most industries became concentrated than necessary. In concentrated industries, there are high barriers to entry. New firms cannot enter these markets that easily. 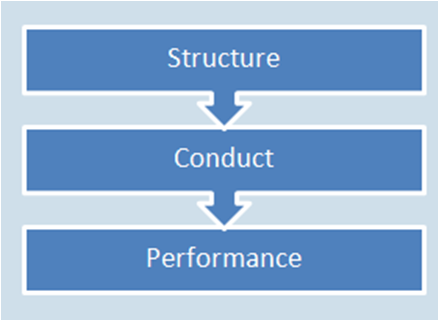 Structure is defined as the components and characteristics of the various markets and industries in an economy. Structure also involves the different sectors of the economy. In the SCP approach, structure is described as the characteristics and relevance of individual markets operating within the economy. It provides a description of the environment in which organizations operate within a specific market. The said structure can be identified by considering the size and number of buyers and sellers in the market. The structure can also be identified based on product differentiation, market barriers and the extent of integration or diversification of firms.

Conduct in the SCP approach involves all actions and behavior of organizations regarding the decisions being taken and the reasons behind them. Conduct focuses on how organizations set prices. Organizations will have to determine whether these prices are in collusion with other firms in the market. Industrial economists are concerned with the performance of organizations. Firms should be able to identify whether their activities and operations will improve economic welfare. Firms should also satisfy and meet customer demands within a specific period. The SCP approach helps organizations analyse whether their processes and products are produced efficiently. Organizations should determine whether the allocation of resources is efficient and effective. The right approach is not to waste resources and produce the right products in just the right quantities. Firms should also look at the other aspects of performance like the relationship between price and cost of product as well as the profits earned.

In the current market, consumer tastes do not change that much. Producers and consumers are said to be perfectly informed. Because of the market conditions, the economic welfare can be maximized using the Pareto analysis in which marginal conditions are expected to be fulfilled. Under marginal conditions, firms are expected to set prices so that they will be equivalent to marginal cost. Using the neoclassical perfect competition model, firms can maximize their profits by ensuring that price will equal marginal cost. This will result in an effective combination of price and output.

The SCP approach states that performance should be determined by the conduct of organizations. This conduct is then determined by the characteristics of market structures. The relationships between structure, conduct and performance will then match the models of monopoly, perfect competition, oligopoly and monopolistic competition. The traditional SCP approach is attractive since it is straightforward in its line of reasoning and is comfortable with the identification of structural characteristics. This kind of approach provides clear guidelines to firms regarding policy-making decisions. The performance of the firm can be further improved by taking actions that are designed to influence the current structures of a specific market. In most cases, performance can be predicted by considering structural conditions of the market. Such conditions can provide sufficient information and predict how organizations should behave. Ignoring conduct in all market conditions can lead to misleading predictions in markets operating under oligopoly. However, modern economists no longer believe that structures determine the performance of firms. Still, they accept the idea that market structures are important for firms to not behave competitively.

The traditional SCP paradigm has two main aspects. The first involves firms obtaining measurements of performance. This can be done by getting a direct measurement rather than just an estimate. The second aspect involves economists using observations gathered from across industries. This is done to create a regression of performance measures on various structures to be used in explaining market performance differences between industries. The measures of market performance can determine whether market power operates in an industry. Measurements of direct or indirect profit are indicators of the performance of an industry against competitive benchmarks. Some of these measurements are rate of return and price-cost margin.

The Chicago School is a school of free-market economics. Unlike the Harvard University which was where the SCP paradigm originated, the foundations for competition analysis were based on the theoretical model of neoclassical theory rather than on empirical studies. The Chicago School believed in the establishment of anti-trust laws. Economic efficiency should be the exclusive goal. Economic efficiency has two parts namely productive efficiency and allocated efficiency. In some instances, practices that can improve the organizations productive efficiency can lower the allocated efficiency of the market. The Chicago School also believe that most markets are competitive in nature. Even if some markets have a few sellers, the market remains competitive. Product differentiation is less likely to undermine competition. Product differentiation and high market concentration do not contribute to anti-competitive issues.

The critique of the Chicago School was based on two grounds. One is that government intervention depends on the loosely demonstrated failures of market. The abuse of market power is an example of market failure. The remedies proposed by the SCP paradigm do not need to improve in addressing the problem. The Chicago school also believes that the SCP paradigm is entirely based on anonymous market transactions and price theory. Since the paradigm is based from these sources, it does not recognize the complex relationships that exist within and outside organizations. For example, an organization can choose to limit the number of suppliers in order to reduce the level of competition among them. The action may result in a complex pricing formula rather than getting a fixed unit price to filter customers.

The price theory that drives the SCP paradigm is said to be lacking in explanatory power according to the Chicago school. There are limitations because it explores how actors interact within a market. The Chicago paradigm takes a more dynamic approach to economic events. The inefficiency brought by market power is temporary in nature. This efficiency will soon be eliminated by the entry of more innovative organizations.

The SCP paradigm has produced different variations of empirical work. Market structure is affected by different basic conditions. These basic conditions include technology, business culture, consumer preferences and product durability among other variables. Government intervention affects every component of the paradigm. Government intervention may come in the form of regulations, taxes and subsidies, international trade policies and price controls. The SCP paradigm is used as a type of checklist for policymakers. They should also understand the function of transaction cost economics. This is a concept that attempts to identify the most efficient institutional and organizational activities that will help reduce transaction costs. Transaction costs economics is also based on the concept of bounded rationality. Economic factors are believed to be purposely rational but limited. Transaction cost economics also recognizes that the internal management of the organization and markets can be alternative forms of allocating resources. These also rely on the facts with corresponding effects if an organization has achieved efficiency. The most efficient firm will be able to either enter the market and engage in specific transactions or take the transactions out of the market and into the organization. These transactions for example, can be the production of goods and services within a vertically integrated firm. To determine whether or not the transaction should be brought into the firm and taken out of the market, organizations should determine the frequency of the transaction. If the transactions are to be conducted frequently, it is best to bring that type of transaction into the organization. The specific transaction might need skilled labor to complete. If for example the transaction seldom occurs like the construction of a new plant, the most efficient resource allocation will be to enter the market and contract services for the transaction to be performed. The same concept applies when firms decide on the degree of uncertainty. If the risk is great, vertical integration into an organization will bring the most efficiency. If the product can be easily duplicated, the transaction should be conducted in the market.

The modern theory of industrial organization is a combination of the SCP and Chicago paradigms into a more comprehensive and successful approach. This is known as the contract-based approach to industrial organization. The SCP paradigm still provides the guidelines but the analysis of conduct is extended from pricing theory to more contract behaviors. In conclusion, the traditional SCP paradigm is still useful for firms as a tool for analysis but other tools or measurements are needed to support the SCP approach. Static economic theories state that profits in the long-run may vary with market structures. These economic theories do not mention anything about the relationship between the market structure and profits during the short-run. Using the SCP paradigm alone may not result in accurate analysis.