Consumer involvement is considered as an important variable that can  help explain how consumers process the information and how this information  might influence their purchase or consumption related behavior. However,  there is wide agreement that the degree of involvement has a very significant  effect on consumer behavior.

Herbert Krugman, a researcher is credited with his contribution to the concept of consumer involvement. According to him, consumers approach the marketplace and the corresponding product/service offerings with varying levels and intensity of interest and personal importance. This is referred to as consumer involvement.

Involvement variables are believed to precede involvement and  influence its nature and extent. These variables are believed to be the  sources that interact with each other to precipitate the level of consumers  involvement at any particular time and situation.  The extent of risk perception the consumer has with purchase decision  can also influence the level of involvement. The perceived risk is the outcome  of consumer’s perception of the chances of potential degree of resulting  unfavorable consequences from making a purchase decision, such as  financial loss, or physical or psychological harm. Researchers have suggested that the level of involvement may also be  influenced by promotional messages and the media used.

Purchase involvement is the level of concern for, or interest in, the  purchase process stimulated by the need to consider a certain purchase. It is  important to realize that consumer involvement can take many forms and a  broad distinction is that it can be cognitive, such as a consumer may be  motivated to learn about the latest specifications of the new iMac; or  emotional, when a consumer is considering the purchase of a gift for his wife  on their first marriage anniversary. There are several broad types of  involvement related to the product, the message, or the perceiver. 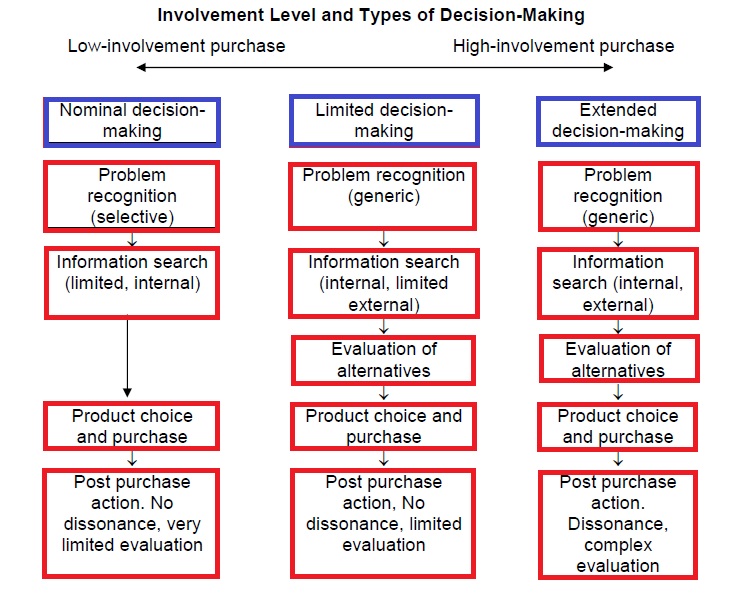 Nominal decision-making is also referred to as nominal problem  solving, habitual decision-making, or routine problem solving. Recognition of  need is likely to lead directly to an intention to buy. Information processing is  very limited or non-existent. There is generally low-involvement with most low priced  and frequently purchased products, which are consumed on an  ongoing basis and involve nominal decision-making. A problem is recognised,  consumer’s internal search from long-term memory comes up with a single  preferred solution, the preferred brand is purchased and no brand evaluation  occurs unless the brand fails to perform as expected. Some of these  decisions are so nominal that the consumer does not even think of purchasing  an alternative brand. Nominal decision-making is generally the outcome of  continued satisfaction with a brand which was initially chosen after an  extended decision-making process, or the consumer does not attach much  importance to the product category or purchase. The consumer buys Sensodyne  toothpaste without further consideration because it meets her/his  overall needs, even though using the best available toothpaste is important to  her/him. In the second situation, consumers may not attach much importance  to salt or sugar they buy for household consumption. Having tried Tata Salt  and found it satisfactory, they now purchase it repeatedly without any thought,  when it is needed. In this category, sales promotions can lead to considerable  brand switching.

Limited decision-making is usually more straightforward and simple.  It involves internal (long-term memory) and limited external search,  consideration of just few alternatives, simple decision rules on a few attributes  and little post purchase evaluation. As pointed out earlier, it covers the middle  ground between nominal and extended decision-making. Buyers are not as  motivated to search for information, or evaluate each attribute enthusiastically,  but actually use cognitive shortcuts. When the level of consumer involvement  is lowest, limited decision-making may not be much different than nominal  decision-making.

Extended decision-making corresponds most closely to the  traditional decision-making perspective. Such decisions involve extensive  internal (long-term memory) and external (outside sources) information search  followed by a rigorous evaluation of several alternatives because consumers  do not possess any meaningful information about the product or service and  need lots of it. The evaluation often involves careful consideration of attributes  of one brand at a time, and taking stock of how the attributes of each brand  measure up to a set of desired characteristics. All this happens in response to  a high level of consumer’s involvement in making a purchase decision. Such  complex decisions are relatively few and may relate to buying a computer,  stereo system, washing machine, laser printer, or a new house. Post  purchase evaluation is more likely to be complex and dissonance causing.