Change whether planned or unplanned occurs in all organizations and at all levels. Change is inevitable and thus today many organizations prepare themselves for change. However the successful organization recognizes and understands the fact that change is not only inevitable it is also required in order to grow and stay ahead of competition. Therefore such organizations plan and implement change. Planning and implementing change requires the expertise of  Organization Development experts who rely on certain models of change.

Some of the popular organization change  management models, which have received attention globally, are:

One of the earliest models of planned change was put forward by Kurt Lewin in 1975. Lewin explained that organizations like human beings prefer to stay in a state of equilibrium or a steady state called as homeostasis. He observed that the stability of human behavior was based on “quasi- stationary equilibrium” supported by a large force field of driving and restraining forces. This observation gave rise to the theory of Force Field Analysis.

Kurt Lewin (1951) introduced the three-step change model. This social scientist views behaviour as a dynamic balance of forces working in opposing directions. Driving forces facilitate change because they push employees in the desired direction. Restraining forces hinder change because they push employees in the opposite direction. Therefore, these forces must be analyzed and Lewin’s three-step model can help shift the balance in the direction of the planned change

According to Lewin, the first step in the process of changing behavior is to unfreeze the existing situation or status quo. The status quo is considered the equilibrium state. Unfreezing is necessary to overcome the strains of individual resistance and group conformity. Unfreezing can be achieved by the use of three methods.

Some activities that can assist in the unfreezing step include: motivate participants by preparing them for change, build trust and recognition for the need to change, and actively participate in recognizing problems and brainstorming solutions within a group.

Lewin’s second step in the process of changing behavior is movement. In this step, it is necessary to move the target system to a new level of equilibrium. Three ions that can assist in the movement step include: persuading employees to agree that the status quo is not beneficial to them and encouraging them to view the problem from a fresh perspective, work together on a quest for new, relevant information, and connect the views of the group to well-respected, powerful leaders that also support the change

The third step of Lewin’s three-step change model is refreezing. This step needs to take place after the change has been implemented in order for it to be sustained or “stick” over time. It is high likely that the change will be short lived and the employees will revert to their old equilibrium (behaviors) if this step is not taken. It is the actual integration of the new values into the community values and traditions. The purpose of refreezing is to stabilize the new equilibrium resulting from the change by balancing both the driving and restraining forces. One action that can be used to implement Lewin’s third step is to reinforce new patterns and institutionalize them through formal and  informal mechanisms including policies and procedures.

The work of Kurt Lewin dominated the theory and practice of change management for over 40 years. However, in the past 20 years, Lewin’s approach to change, particularly the 3-Step model, has attracted major criticisms. The key ones are that his work: assumed organizations operate in a stable state; was only suitable for small-scale change projects; ignored organizational power and politics; and was top-down and management-driven.

Lippitt, Watson, and Westley (1958) extend Lewin’s Three-Step Change Theory. They created a seven-step theory that focuses more on the role and responsibility of the change agent than on the evolution of the change itself. Information is continuously exchanged throughout the process. The seven steps are:

This model focuses on the cyclical nature of change. This model was mainly explained by Cummings and Huse and has eight steps. 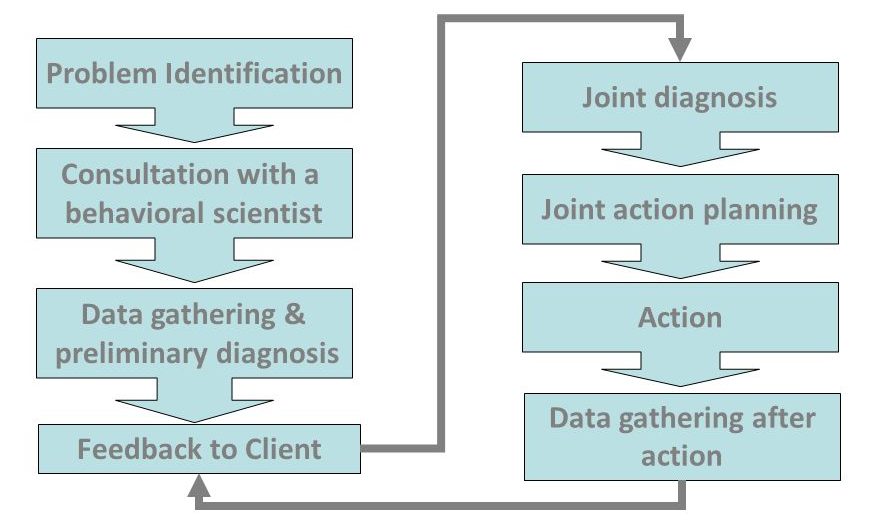 The action research model of implementing planned change is very useful for those organizations which want to implement change in a planned and phased manner. It also helps organizations to gather the relevant knowledge needed to revamp sagging organizational processes.

This model was developed by Bullock and Batten and described the organizational state and the change processes. The basic premise of this model explains that since an organization exists in different states from one period to another, planned change can be implemented to move the organization from one state to another. The  Integrative Model of Planned Change  model consists of four stages.

5. The ADKAR model of Change Management

The ADKAR model developed by Jeff Hiatt   for individual change management presents five building blocks that an individual must obtain to realize change successfully. These include awareness, desire, knowledge, ability and reinforcement. It is management’s job to create an environment in which people can go through these stages as quickly as possible.

There are five steps in ADKAR model of change management:

After Lewin’s model many other writers upgraded his theory making it more effective however the fundamental aspects were still there. One of the most popular model of change management is Kotter’s eight step model. According to Kotter, successful implementation of change depends on the eight steps as proposed by him. Skipping any one of the eight steps might create illusion of speeding of the process but it does not improve the effectiveness of change.

Kotter’s 8 step Model  of Change include the following steps: 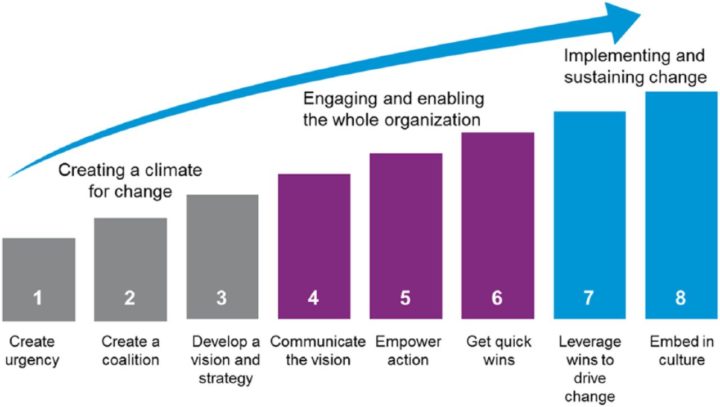 The first four steps of Kotter’s eight model act as a defroster a hardened equilibrium. Stages five to seven is the introduction of many new changes. It resembles with the change phase in the Lewin’s model. The last phase grounds the changes that have been made into the business or organisation culture. The success and improvement of the organisation depends on the proper follow of the sequence.