Home » Operations Management » 5 Why Analysis – A Root Cause Analysis Tool

5 Why Analysis is a simple approach for exploring root causes and instilling a “Fix the root cause, not the symptom,” culture at all levels of a company.  The  5 Why Analysis was originally developed by Toyota founder Sakichi Toyoda and was later used within Toyota Motor Corp. during the development of the Toyota Product System (TPS). At Toyota,  5 Whys is still a critical component of problem-solving training, and the method is still widely applied within the company when problems occur.

“Toyota Business Practices dictates using the ‘Five Whys’ to get to the root cause of a problem, not the ‘Five Whos’ to find a fire the guilty party.” –  Jeff Liker, The Toyota Way

It can be used whenever the real cause of a problem or situation is not clear. Using the 5 Whys is a simple way to try solving a stated problem without a large detailed investigation requiring many resources. When problems involve human factors this method is the least stressful on participants. It is one of the simplest investigation tools easily completed without statistical analysis. Also known as a Why Tree, it is supposedly a simple form of root cause analysis. Application of the procedure involves taking any problem and asking “Why — what caused this problem?” Then, when the cause is identified, asking “Why?” again (i.e. “what caused the cause?”) The strategy, as commonly understood, is to ask “Why” five times or more uncovering links in a causal chain going back in time. By repeatedly asking the question, ‘Why?’ you peel away layers of issues and symptoms that can lead to the root cause. Most obvious explanations have yet more underlying problems. But it is never certain that you have found the root cause unless there is real evidence to confirm it. 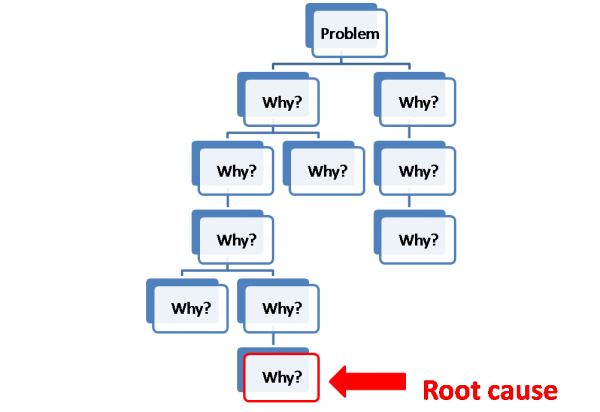 5 Why Analysis  is one of the most effective methods of problem solving as it results in a deep understanding of the complex interaction of unseen factors. The normal procedure of 5 Why Analysis consists of following steps:

Although the “five” in 5 Whys is not gospel, it is held that five iterations of asking why is generally sufficient  to get to a root cause. Fewer than five and the risk of missing the root cause  increases. The real key is to encourage the quality check group to avoid assumptions and logic traps and instead trace the chain of causality to a root cause that still has some direct connection to the problem statement.  Also, sometime the underlying reason for a problem will lead to another question to be investigated.

The 5 Why Analysis  is often applied with a fishbone or Ishikawa diagram, which allows you to lay out all the potential inputs and factors affecting a problem. The 5 Whys are a good way to then drill down into the details. The methodology is best used in a team setting, and it helps to discuss the various issues in depth and make sure the team comes away with an agreement before proceeding. Be careful not to “lead” the questioning in order to get to a preconceived answer.

The key advantage of 5 Why Analysis is that it is ultimately a very simple tool that allows you to very quickly get to the root cause of a problem. However, a key disadvantage is that it is essentially a very simple tool and may not be suitable for complex problems that may have a multitude of causes. If the problem is complex 5 Why Analysis may not be suitable so you should use a more sophisticated approach such as full Root cause Analysis or Cause and Effect Analysis which will look at the problem in much more detail. However, it is always worth doing a 5 Why analysis as it is a quick and easy approach.