The nature of work and its organization has interested managers, economists and social scientists for as long as people have been employed by others to engage in productive activity. Managers have largely been interested in maximizing output from available resources.

Job design can be define as the process of putting together various elements to form a job, bearing in mind organizational and individual worker requirements, as well as considerations of health, safety, and ergonomics. The scientific management approach of Frederick Winslow Taylor viewed job design as purely mechanistic, but the later human relations movement rediscovered the importance of workers’ relationship to their work and stressed the importance of job satisfaction. 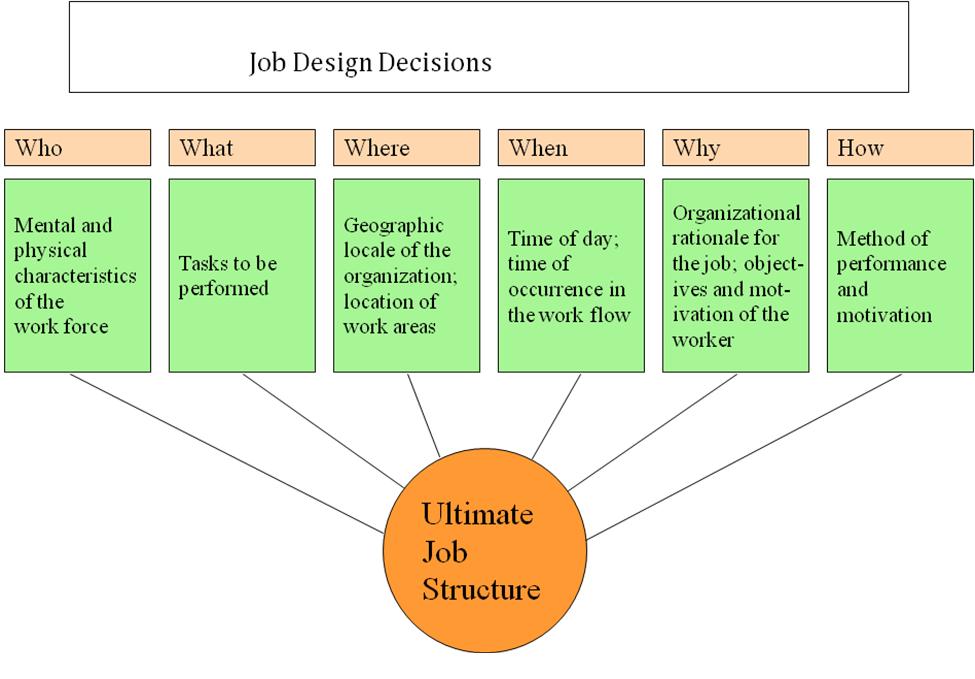 During and immediately after the Second World War American writers, particularly, were questioning the relationship between job and organization design and productivity. It was being recognized that difficulties arise in the selection of personnel if only those able to tolerate and work well in simple, highly repetitive jobs are to be recruited.

As early as 1950 in the USA job rotation and job enlargement were being both advocated and tested as means for overcoming boredom at work with all its associated problems. In an early case example IBM introduced changes to machine operators’ jobs to include machine setting and inspection. In addition they introduced other wide-ranging changes in both the production system and the role of foremen and supervisors.

It is less than clear just how successful changes of this type have been in practice. Undoubtedly management in certain circumstances can benefit from the increased flexibility of the labor. However, workers often expect higher payment to compensate for learning these other jobs and for agreeing to changes in working practices. The new jobs are often only a marginal improvement in terms of the degree of repetition, the skill demands and the level of responsibility; as a result workers have not always responded positively to such change. Job enlargement schemes may not be feasible, e.g. in motor vehicle assembly, without a major change in the production facilities.

The concepts of both job rotation and enlargement do not have their basis in any psychological theory. However, the next generation of attempts to redesign jobs emerging from the USA developed from the researches of Frederick Herzberg. During the 1950’s and 1960’s Herzberg developed his ‘two factor’ theory of motivation.

In this theory he separated ‘motivators’ from ‘hygiene’ factors. The hygiene factors included salary, company policies and administration as well as supervision. They were seen as potential sources of dissatisfaction but not of positive motivation. Another set of factors including achievement, recognition, responsibility, advancement, growth and the work itself were postulated as the ‘real’ motivators.

From this theory Herzberg developed a set of principles for the enrichment of jobs as follows:

Herzberg’s other major contribution to the development of ideas in the area of job design was his checklist for implementation. This is a prescription for those seeking success in the enrichment of jobs:

Job enrichment, then, aims to create greater opportunities for individual achievement and recognition by expanding the task to increase not only variety but also responsibility and accountability. This can also include greater worker autonomy, increased task identity and greater direct contact with workers performing servicing tasks.