The Value Net Framework, also known as Coopetition Framework  is an analytical strategy tool  developed by Adam Brandenburger and Gary Nalebuff in 1996, combining strategy and game theory, in order to describe and analyze the behavior of multiple players within a given industry or market.  The Value Net Framework  is an alternative to Porter’s Five Forces framework,  extends the five forces framework more general by examining the role of complementors.

Co-opetition  is a neologism representing the ambivalence of competition and cooperation in business relationships.  Co-opetition is part competition and part cooperation. It  describes the fact that in today’s business environment, most  companies can achieve more success in a dynamic industry  than they ever could working alone.  Specifically, when companies work together, they can create a  much larger and more valuable market than they ever could by  working individually. Companies then compete with each other  to determine who gets the largest share of that market.  Co-opetition allows for the real-world business situation that  there can be multiple winners in the marketplace. Business,  unlike war, is not a winner takes all proposition. The objective is  to maximize your return on investment – regardless of how well  or how poorly other people or other companies perform.

‘‘Co-opetition recognizes that business relationships have more  than one aspect. As a result, it can occasionally sound  paradoxical. But this is part of what makes co-opetition such a  powerful mindset. It’s optimistic, without being naive. It  encourages bold action, while helping you to escape the pitfalls.  It encourages you to adopt a benevolent attitude towards other  players, while at the same time keeping you tough-minded and  logical. By showing the way to new opportunities, co-opetition  stimulates creativity. By focusing on changing the game, it keeps  business forward looking. By finding ways to make the pie  bigger, it makes business both more profitable and more  personally satisfying. By challenging the status quo, co-opetition  says things can be done differently – and better.’’ –  Adam Brandenburger and Barry Nalebuff

Any company (or industry) operates in an environment having four main groups that influence the course of any business. These four groups are: 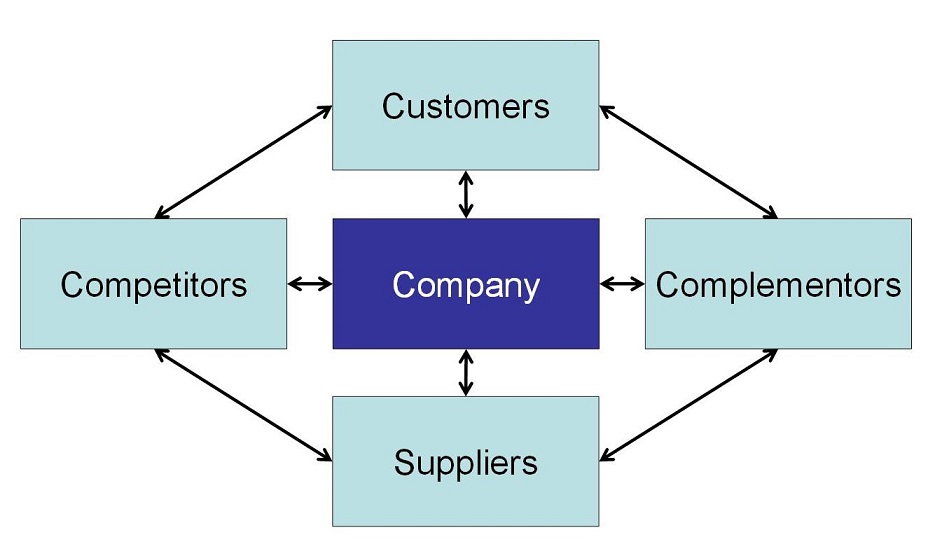 The Value Net Framework is a schematic map designed to represent all the players in the game and the inter-dependencies among them. Interactions take place along two dimensions. Along the vertical dimension are the company’s customers and suppliers.  The vertical dimension (suppliers-company-customers) is the  basic source of value (or economic surplus) creation. Along the horizontal dimension are the players with whom the company interacts but does not transact. They are its competitors and complementors.  Competitors reduce the company’s added value along the  vertical axis and complementors increase your added value along the  vertical axis.  Brandenburger and Nalebuff state that “complementors are just the mirror image of competitors.”   Customers value your product more when there are complementors whereas they value your product less when there are substitutors.   Understanding this relationship highlights a deficiency in current competitive practices – only focusing on how to eliminate one’s competitors.   Rather organizations should also attempt to develop commodity complementors which in the long-term increases an organization’s overall value to a customer.

The Value Net Framework describes the various roles of the players. It is possible for the same player to occupy more than one role simultaneously. Designing the Value Net for business is the first step toward changing the game.

According to game theory, the game has five elements: players, added values, rules, tactics, and scope.  To change the game of business, you have to alter one or more  of this five elements.