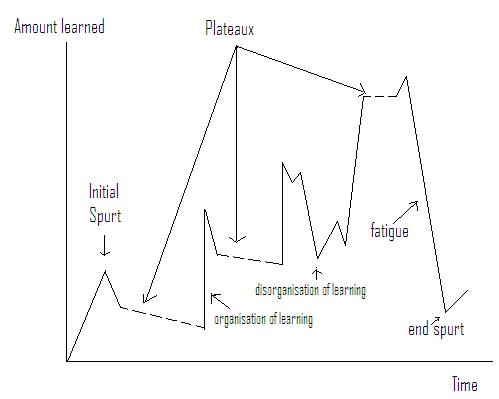 Characteristics  of the Organizational Learning Curve

Certain characteristics are common to all learning curves. One such feature is the initial spurt. At the beginning, it is natural that the rate of learning exhibits spurt. Usually, the graph levels off at some stage, indicating that maximum performance has been achieved. Apparently at the beginning of the learning process, the subject is highly motivated and seems to exhibit a significant surge of effort. Many experienced trainers exploit this initial spurt by selecting the most important items to be communicated and presenting them as a package to the students at the beginning of the training unit. In many ways, it is possible to exemplify the initial spurt with the aphorism “the first step is the best step”

Another feature of the organizational learning curve is the learning plateau. At some point in the learning process there is a flattening off in terms of the improvement, a plateau. Frequently, the process of learning is marked by discontinuities and involves escalating from one plateau to another. Most learners are only too aware of the experience of finding themselves on a plateau, which manifests itself in the feeling that they are never going to get anywhere.

Disorganization of learning is an actual fall off in performance. This arises when the subject has to choose between alternative methods of tackling a task.

The last characteristic of the organizational learning curve is the end spurt. The end spurt is preceded by fatigue which is likely to set in with the passage of time. When the training season draws nearer to an end and the subject realizes this, there occurs resurgence of interest and effort to learn more. This revival is called the end spurt.