John Howard and Jagadish Sheth put forward the Howard Sheth model of consumer behavior in 1969, in their publication entitled, ‘The Theory of buyer Behaviour’.

The Howard Sheth Model is a sophisticated integration of the various social, psychological, and marketing influences on consumer choice into a coherent sequence of information processing. It aims not only to explain consumer behavior in terms of cognitive functioning but to provide an empirically testable depiction of such behavior and its outcomes (Howard 1977).

The logic of the Howard Sheth model of consumer behavior summarizes like this. There are inputs in the form of Stimuli. There are outputs beginning with attention to a given stimulus and ending with purchase. In between the inputs and the outputs, there are variables affecting perception and learning. These variables are termed ‘hypothetical’ since they cannot be directly measured at the time of occurrence.

According to the Howard Sheth model of consumer behavior, there are four major sets of variables; namely: 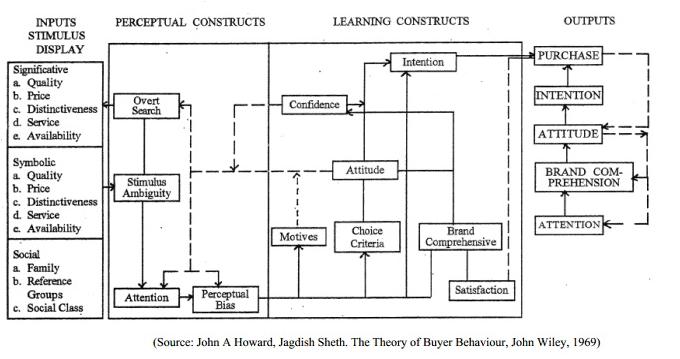 The decision-making process, which Howard-Sheth Model tries to explain, takes place at three Inputs stages: Significance, Symbolic and Social stimuli. In both significative and symbolic stimuli, the model emphasizes material aspects such as price and quality. These stimuli are not applicable in every society. While in social stimuli the model does not mention the basis of decision-making in this stimulus, such as what influences the family decision? This may differ from one society to another.

Most scholars agree that the study of consumer behavior was advanced and given an impetus by Howard Sheth Model. The major advantage and strength of the model lied in the precision with which a large number of variables have been linked in the working relationships to cover most aspects of the purchase decision and the effective utilization of contribution from the behavioral sciences.

Finally, no direct relation was drawn to the role of religion in influencing the consumer’s decision-making processes. Religion was considered as an external factor with no real influence on consumers, which gives the model obvious weakness in anticipation of the consumer decision.