Waiting in lines is a part of our everyday life. Waiting in lines may be due to overcrowded, overfilling or due to congestion. Any time there is more customer demand for a service than can be provided, a waiting line forms. We wait in lines at the movie theater, at the bank for a teller, at a grocery store. Wait time is depends on the number of people waiting before you, the number of servers serving line, and the amount of service time for each individual customer. Customers can be either humans or an object such as customer orders to be process, a machine waiting for repair. Mathematical analytical method of analyzing the relationship between congestion and delay caused by it can be modeled using Queuing analysis. Queuing theory provides tools needed for analysis of systems of congestion. Mathematically, systems of congestion appear in many diverse and complicated ways and can vary in extent and complexity. 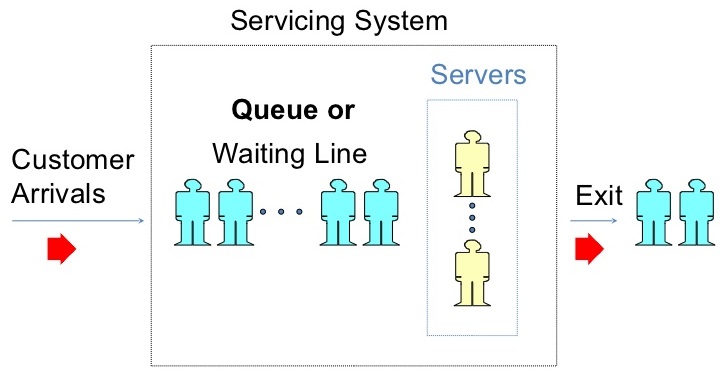 Another element of queuing system is service system. The number of waiting lines, the number of servers, the arrangements of the servers, the arrival and service patterns, and the service priority rules characterize the service system. Queue system can have channels or multiple waiting lines. Examples of single waiting line are bank counter, airline counters, restaurants, amusement parks. In these examples multiple servers might serve customers. In the single line multiple servers has better performance in terms of waiting times and eliminates jockeying behavior than the system with a single line for each server. System serving capacity is a function of the number of service facilities and server proficiency. In queuing system, the terms server and channel are used interchangeably. Queuing systems are either single server or multiple servers. Single server examples include gas station food mart with single checkout counter, a theater with a single person selling tickets and controlling admission into the show. Multiple server examples include gas stations with multiple gas pumps, grocery stores with multiple cashiers, multiple tellers in a bank. Services require a single activity or services of activities called phases.   In a single-phase system, the service is completed all at once, such as a bank transaction or grocery store checkout counter. In a multiphase system, the service is completed in a series of phases, such as at fast-food restaurant with ordering, pay, and pick-up windows. Queuing system is characterized by rate at which customers arrive and served by service system. Arrival rate specifies the average number of customers per time period. The service rate specifies the average number customers that can be serviced during a time period. The service rate governs capacity of the service system. It is the fluctuation in arrival and service patterns that causes wait in queuing system. Waiting line models that assume that customers arrive according to a Poisson probability distribution, and service times are described by an exponential distribution. The Poisson distribution specifies the probability that a certain number of customers will arrive in a given time period. The exponential distribution describes the service times as the probability that a particular service time will be less than or equal to a given amount of time. A waiting line priority rule determines which customer is served next. A frequently used priority rule is first-come, first-served. Other rules include best customers first, high-test profit customer first, emergencies first, and so on. Although each priority rule has merit, it is important to use the priority rule that best supports the overall organization strategy. The priority rule used affects the performance of the waiting line system.

Basic single server model assumes customers are arriving at Poisson arrival rate with exponential service times, and first come, first serviced queue discipline, and infinite queue length, and infinite calling population. By adding additional resources to single server system either service rate can be increased or arrival rate at each server can be decreased with additional cost overhead.    In Single server single-phase system, customer is served once completed. Common examples of single server single-phase are a teller counter in bank, a cashier counter in super market, automated ticketing machine at train station. In single server queuing system wait time or performance of system depends on efficiency of serving person or service machine. Single server single-phase queuing system is most commonly automated system found in our regular life. For example many superstores have replaced manual billing counters with automated machines. Single server multiple-phase system incorporates division of work into phases to keep waiting line moving as completion of whole complete operation might increase wait in a line. Common examples of these systems are automatic or manual car wash, drive through restaurants.

Waiting line models are important to a business because they directly affect customer service perception and the costs of providing service. If system average utilization is low, that suggests the waiting line design is inefficient. Poor system design can result in over staffing. Long waits suggest a lack of concern by the organization or can be view as a perception of poor service quality. Queuing analysis has changed the way businesses use to run and has increased efficiency and profitability of businesses.