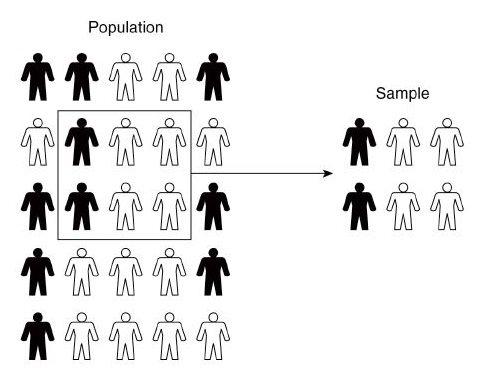 A good sample is one which satisfies all or few of the following conditions:

The size of sample depends on number of factors. Some important among them are:

An operational sampling process can be divided into seven steps as given below:

Defining the population of interest, for business research, is the first step in sampling process. In general, target population is defined in terms of element, sampling unit, extent, and time frame. The definition should be in line with the objectives of the research study. For ex, if a kitchen appliances firm wants to conduct a survey to ascertain the demand for its micro ovens, it may define the population as ‘all women above the age of 20 who cook (assuming that very few men cook)’. However this definition is too broad and will include every household in the country, in the population that is to be covered by the survey. Therefore the definition can be further refined and defined at the sampling unit level, that, all women above the age 20, who cook and whose monthly household income exceeds Rs.20,000. This reduces the target population size and makes the research more focused. The population definition can be refined further by specifying the area from where the researcher has to draw his sample, that is, households located in Hyderabad.

A well defined population reduces the probability of including the respondents who do not fit the research objective of the company. For ex, if the population is defined as all women above the age of 20, the researcher may end up taking the opinions of a large number of women who cannot afford to buy a micro oven.

Once the definition of the population is clear a researcher should decide on the sampling frame. A sampling frame is the list of elements from which the sample may be drawn. Continuing with the micro oven ex, an ideal sampling frame would be a database that contains all the households that have a monthly income above Rs.20,000. However, in practice it is difficult to get an exhaustive sampling frame that exactly fits the requirements of a particular research. In general, researchers use easily available sampling frames like telephone directories and lists of credit card and mobile phone users. Various private players provide databases developed along various demographic and economic variables. Sometimes, maps and aerial pictures are also used as sampling frames. Whatever may be the case, an ideal sampling frame is one that entire population and lists the names of its elements only once.

4. Selection of the Sampling Method:

The sampling method outlines the way in which the sample units are to be selected. The choice of the sampling method is influenced by the objectives of the business research, availability of financial resources, time constraints, and the nature of the problem to be investigated. All sampling methods can be grouped under two distinct heads, that is, probability and non-probability sampling.

The sample size plays a crucial role in the sampling process. There are various ways of classifying the techniques used in determining the sample size. A couple those hold primary importance and are worth mentioning are whether the technique deals with fixed or sequential sampling and whether its logic is based on traditional or Bayesian methods. In non-probability sampling procedures, the allocation of budget, thumb rules and number of sub groups to be analyzed, importance of the decision, number of variables, nature of analysis, incidence rates, and completion rates play a major role in sample size determination. In the case of probability sampling, however, formulas are used to calculate the sample size after the levels of acceptable error and level of confidence are specified. The details of the various techniques used to determine the sample size will be explained at the end of the chapter.

In this step, the specifications and decisions regarding the implementation of the research process are outlined. Suppose, blocks in a city are the sampling units and the households are the sampling elements. This step outlines the modus operandi of the sampling plan in identifying houses based on specified characteristics. It includes issues like how is the interviewer going to take a systematic sample of the houses. What should the interviewer do when a house is vacant? What is the recontact procedure for respondents who were unavailable? All these and many other questions need to be answered for the smooth functioning of the research process. These are guide lines that would help the researcher in every step of the process. As the interviewers and their co-workers will be on field duty of most of the time, a proper specification of the sampling plans would make their work easy and they would not have to revert to their seniors when faced with operational problems.

7 thoughts on “Meaning of Sampling and Steps in Sampling Process”