Design for Manufacturing and Assembly (DFMA) method was introduced by Geoffrey Boothroyd since 1960s on automatic handling. This enables the use of  gathered data of previously done mistakes, speeding up the development process and accomplishing new philosophies and technologies to further ensure that the activities that are quicker and more precise in generating results can really reach this target. All aspects of design, development, manufacturability, total parts, assembly time, cost and modularity are considered in this analytical process. This process mainly focuses on enhancing the product to allow improvements in the manufacturing, quality, reliability, cost, time to market, and many other fields.

Design for Manufacturing and Assembly (DFMA) is a system that is constructed using the building blocks that arise from the separate treatment of the productions system and manufacturing processes of a products life cycle. DFM and DFA are the two elements that focus in the increasing the percentage of time spent on the conceptual design phase in a products development. These are the two important milestone in the process of products development, as DFM is used during the early realization of the technical criteria needed to be fulfilled by successful creation of the assembly parts. Therefore, DFM enables designers and product developers to collect early knowledge of the technical/ managerial specifications of the parts, hence laying a fertile ground for the devising methods of manufacturing that come in harmony with the specifications set. On the contrary, satisfying the standards of production that are attributed to production rate, lead times and yield rate is made possible by the application of DFA systems in the designing and development of products less parts promote easier assembly in the aspect of time and work.

Product designing is the initial step in the product development process and it is where the most critical decision are undertaken that affects the final form and cost of the product, having an impact on  more that 70% of the overall cost of a product. This can greatly help in improving the costs of production and development while improving on quality and reliability.

Basically, the main objective of this research is to redesign a new selection of consumer products for a more modular design and lower production cost. Hence, the DFMA method will be applied to analyze the chosen product. As it offers a systematic process helping in simplification of the overall design leading to improving the integration between designer and manufacturer, to increase productivity, reduce the cost, improve product quality and reliability, to shorten lead time and fulfil the end users requirements.

Design for Manufacturing and Assembly (DFMA) is known as a systematic design evaluation process, used to improve part design and part manufacture implemented earlier in the design process.

As mentioned earlier Design for manufacturing and assembly (DFMA) consists of two main building blocks that is Design for Manufacturing (DFM) and Design for Assembly (DFA). Where DFM methodology is used to analyse individual part geometry and process choices for impact on the manufacturing process, materials and tooling costs, while DFA is a structured methodology used to analyse the design concepts or existing products to simplify the design and assembly processes. Although DFA can be seen as a separate philosophy, it is commonly seen as a central element of DFM.

To implement DFMA in the development process of a product there is a need for extra planning time earlier in the design phase. Later in the process of development this time is usually recovered as the early attention to creating a detailed design and its direct impact on manufacturing eliminates the need for design evaluation and improvement.

Following are the goals associated with the Design for Manufacturing and Assembly (DFMA) methodology:

During the initial analyses of a concept design or an existing product these principles should be considered. Here, Design efficiency being the performance evaluation factor is used to determine the effectiveness of the current design, and this value is then used as the baseline to further improve the design by implementing the identified goals. This value is calculated for all the new design alternatives, the method of determination varies depending upon the type of DFMA method being used. There a multiple discrete methods for evaluating part for DFMA, although these techniques have a number of common steps associated with them. They begin by tearing down the part, and as each part is removed for the overall assembly, three questions are put forward for the identification of the component that is a candidate (or the components that are candidates) for combination or elimination into other components. These question are as follows:

There are a lot of different ways to answer the question mentioned above. One of which is used in component reduction and simplification of the design, that is the “Subtract and Operate method” (SOP).This methods helps in identifying the components that can be eliminated.

The Subtract and Operate (SOP) is a four-step procedure, as shown in figure; 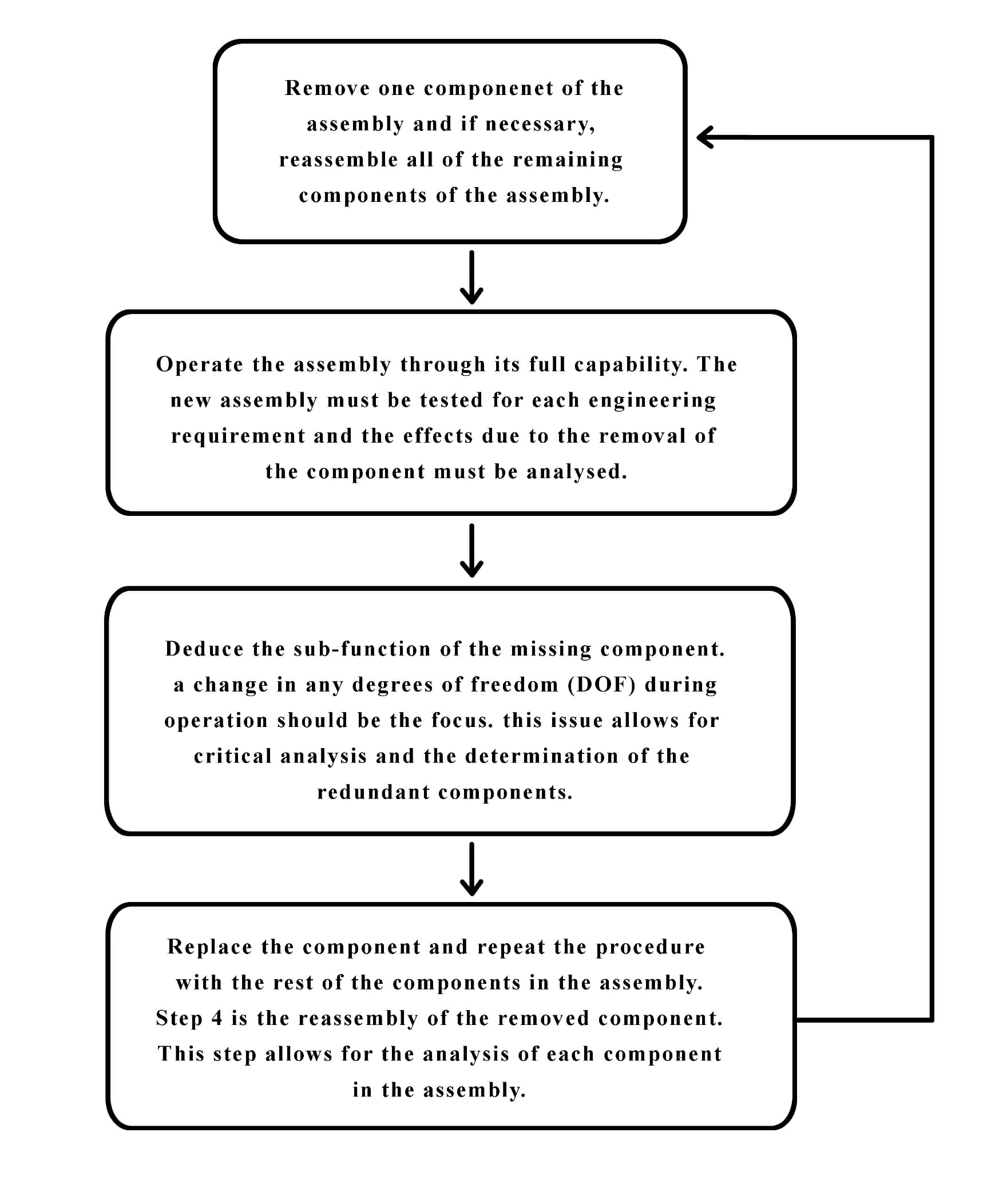 The Subtract and Operate procedure (SOP) is an in-depth analysis of the assembly consisting of basic part, answering the fundamental question being “is that part required?” SOP provides a procedure to expose components that can be eliminated from the overall assembly. A method must be used for the combination of the eliminated components with the remaining component a given assembly. And to evaluate the impact on these combinations of parts, “force flow diagram” are proposed. Like other linear diagrams these force flow diagrams represent the transfer of force through a product’s components. In this method, components are shown using circle whereas forces are shown by arrows that are also used to connect components.

This diagram is used to analyse the assembly and determine which components can be combined, “R” is used in the diagram to illustrate a relation between two components. Then, the diagram is decomposed into sub-assemblies based of the “R’s”. If components are not violation the assembly, material or disassembly issues can then combined. The combination of parts that do not belong to the same sub-assemblies becomes more complicated. A renowned method to answer the three major question and to execute DFMA is using a “Functionality Chart”. This chart provides the sequence and logic for the designers to be able to determine if the component is a candidate for eliminating or for the possible combining with the other components of the assembly. The Functionality flowchart and its process sequence is shown in the following figure; 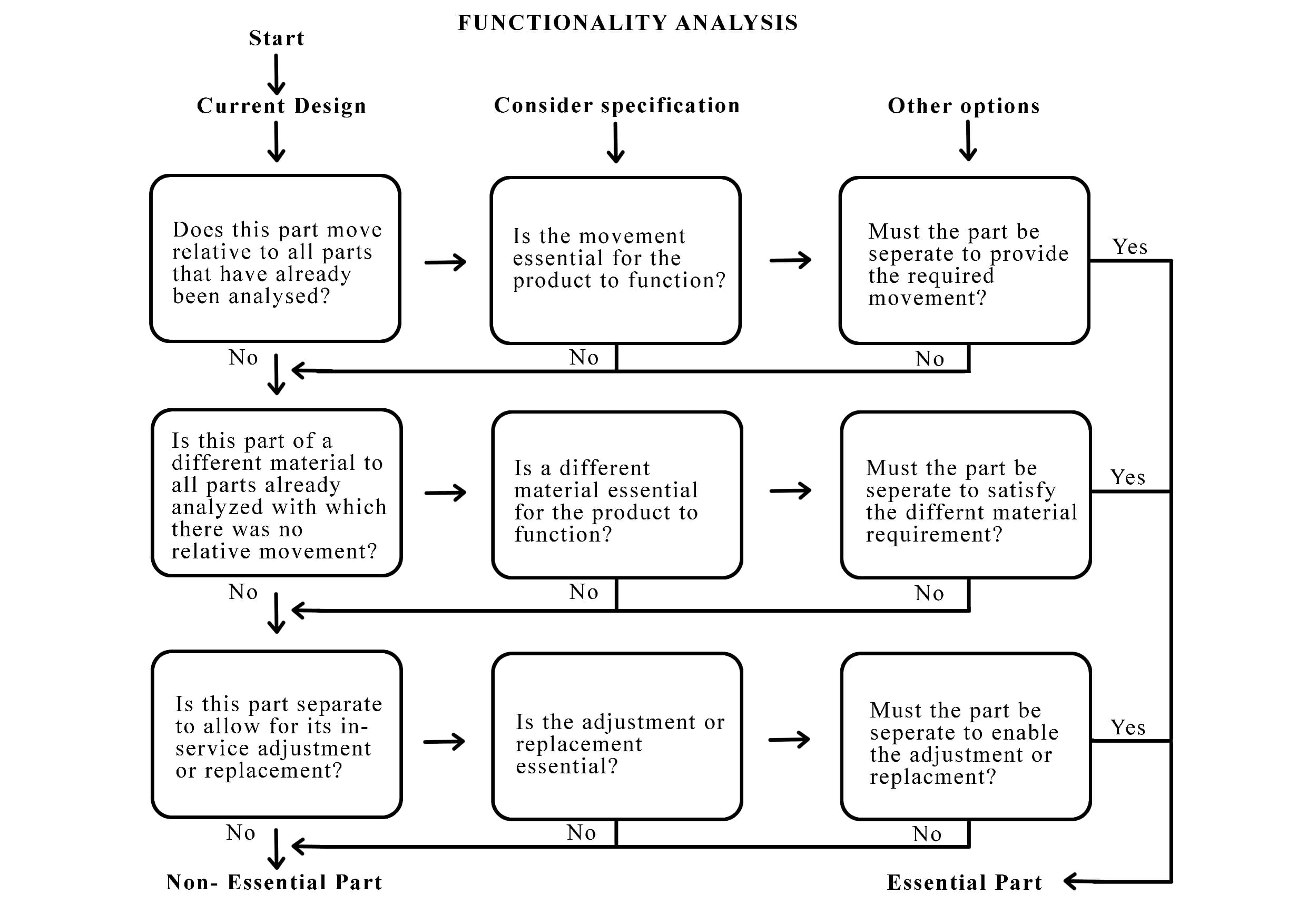 With the usage of this chart, the essential and non-essential components can be identified and the design efficiency can be then calculated depending upon the DFMA methodology used which is an estimate of how good the design is when compared to the three major questions.