The earning capacity and potential of the firm are reflected by the Income Statement or the Profit and Loss Account.   The profit and loss account is the “scoreboard” of the firm’s performance during a particular period of time (usually one year). Since it reflects the results of operations for a period of time, it is a flow statement.   In contrast, the balance sheet is a stock, or status statement as it shows assets, liabilities and owners’ equity at a point of time. The profit and loss account presents the summary of revenues, expenses and net income (or net loss) of a firm for a period of time. Net income is the amount by which the revenues earned during a period exceed the expenses incurred during that period.   If the firm’s operations prove to be unprofitable, total expenses will exceed total revenues and the difference is referred to as net loss. Revenues are the amounts which the customers pay to the firm for providing them the goods and services. To determine the net income, the accounting system matches the expenses incurred during the accounting period against the revenues earned during that period. This matching is called the matching concept.   The time period for which matching is done is called the accounting period. 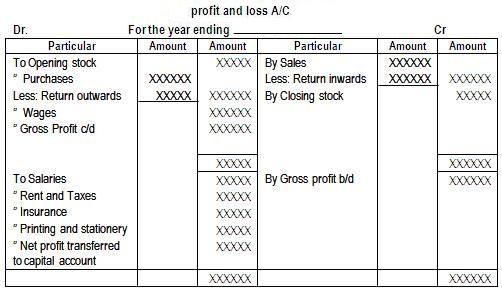 Nature of Revenues — Revenues are the values of outputs supplied to the customers.   More specifically, revenue is the gross inflow of assets or the gross decrease in liabilities that results from certain profit-directed activities of the enterprise that can change owners’ equity.   Revenue can arise from the sale of products to customers, the rendering of services or the supply of the firm’s resources to others, resulting in the receipt of rent, interest, dividend, royalties, commission, fees, etc., and the sale of assets of the firm other than those held as stock-in-trade(such as, plant, machine, land, building or investments).  Thus revenue arises when the inflow of assets or the decrease of liabilities results in an increase in owners’ equity.   The inflow of assets accompanied with increase in liabilities, or decrease in liabilities coupled with assets decrease do not create revenue.   Thus, no revenue will result when borrowing increases assets but not owners’ equity and payments to creditors or debenture holders reduce liability but do not increase owners’ equity.   Similarly, when owners’ equity increases due to issuance of new shares, no revenue has taken place. Revenues arising from the main operations or business of the firm are called operating revenues.   For example, gross proceeds from the sale of products manufactured by a firm are operating revenues.   Revenues which are incidental or indirect to the main operations of the firm are called non-operating revenues.   For example, the gross proceeds from the sale of old equipment in non-operating revenue. Similarly, dividend or interest income from temporary investments is examples of non-operating revenues.

Revenue Recognition — In practice, it is not easy to determine when revenue should be recognized in the financial statements.   To recognize revenue, accountants make use of the realization principle.   The principle may be stated as follows: Revenue is generally recognized when both of the following conditions are met: (i) the earning process is complete or virtually competes and (ii) an exchange has taken place. Generally, revenue is recognized when the goods have been sold or the services have been provided.   The earnings process is treated complete with the sale or the performance of a service.   When the product has been sold or service performed, the firm, decrease in liabilities: thus an exchange has occurred.   From a legal point of view, a sale takes place when title to or ownership of the goods passes from seller to buyer.   We note that the realization principle requires revenue to be recognized during the period when the sale is made or when the service is performed.   This method of recognition is called the accrual concept.   The accrual concept should be contrasted with the cash concept.  According to the cash concept, revenue could be recognized only when cash is received for the sale or service, irrespective of when the sale is made or service is rendered.   The accrual concept results in more objective matching of expenses and revenues and is preferred by the accountants.

Nature of Expenses — Simply stated, the cost of earning revenue is called the expense.   Expenses occur when assets are consumed or liabilities are increased in order to produce revenue.   More specifically, expenses represent a gross decrease in assets or gross increase in liabilities that result from profit-directed activities that change owners’ equity.   If a firm pays wages to its workers; then it incurs an expense.   The firm used the services of its workers in manufacturing the products which have been sold and resulted in revenue.   If the wages are paid in cash, assets of the firm have decreased. As the liabilities are not at all affected by this, the decrease will be in owners’ equity.   Even if the wages are not paid in cash but are payable, still an expense is incurred.   If the services have been rendered by the workers, the firm has an obligation to pay to them. So there is an increase in liabilities of the firm.   As net assets of the firm decrease due to increase in liabilities, owners’ equity will decrease.   Cost is not the same thing as an expense. Cost is an outlay incurred to acquire some asset.   Cost is distinguished as expired cost and unexpired cost.   Expired costs are the ones which have helped to produce revenues.   Expired costs are recognized as expenses in the income statement.   Expired costs are also known as revenue expenditures.   Unexpired costs are those costs which will help produce revenue in future. Such costs are recognized as assets in the balance sheet.   Thus assets (unexpired costs) become expenses (expired costs) as they are used up and lose their ability to generate revenue in future periods.   Unexpired costs are also known as capital expenditures.

Expense Recognition — The practical problem lies in recognizing an expense.   Three expense recognition principles may be followed in matching expenses with revenues.   The first principle is called the principle of associating cause and effect.   According to this principle certain costs expire in a particular accounting period because they can be associated directly with specific revenue recognized during that period.   Examples of such costs are the costs specifically related to producing certain goods that are sold. The second principle is the principle of systematic and rational allocation.   It deals with those costs which expire to generate revenue during a period but cannot be associated directly with the specific revenue.   The principle states that such costs should be allocated in a systematic and rational manner among the accounting periods in which they benefit revenue. Depreciation expense is an example of such costs.   The third principle is the immediate recognition principle.   This principle states that all those costs which will not provide any future benefits should be recognized immediately.   The examples of such cost are selling and administrative expenses and all losses.   When an asset (or cost) expires without benefiting in terms of revenue, it is called a loss.   Examples of losses are goods or building lost by fire, marketable securities sold for less than their purchase price and so on. The accrual concept is followed in recognizing expenses.   Expenses are recognized in the income statement in the period during which the costs expire.   In contrast, the cash concept recognizes expense only when the cash is paid.