Bill Gates was born in Seattle on October 28, 1955 to his parents, Mary and William Gates II.   He has two sisters. His father was a prominent Seattle lawyer, and his mother was a schoolteacher, University of Washington regent and chairwoman of United Way International. His great-grandfather was a state legislator and mayor, and his grandfather was the vice president of a national bank.

Bill strongly believes in hard work. He believes that if you are intelligent and know how to apply your intelligence, you can achieve anything. In school, he had an excellent record in mathematics and science. Still he was getting very bored in school and his parents knew it. Bill’s parents came to know their son’s intelligence and decided to enroll him in prestigious Lakeside private prep school, known for its intense academic environment. Bill first started working with computers at the school. His mother was on the committee that donated the terminal to the school, which was connected via a telephone to a local computer company. Bill and a few other students formed the Lakeside Programmers Group, and nearly spent all of their time on the computer writing programs for various purposes. The group was even banned from the computer for a few weeks for hacking into the security program and altering data on the system. Many of the group members ended up working at Microsoft as programmers. Bill later went onto Harvard University, but dropped out in 1974 to form Microsoft with Paul Allen, who had been a friend of Bill Gates since childhood. Bill Gates had known Steve Ballmer at Harvard, and they worked on programs together for the Altair computer.

Bill Gates and his close friend Allen started new company of their own, Tarf-O-Data. They developed a small computer to measure traffic flow. From this project they earned around $20,000. The era of Traf-O-Data came to an end when Gates left the college. In 1973, he left home for Harvard University. He took the standard freshman courses with the exception of signing up for one of Harvard’s toughest mathematics courses. He did well over there, but he couldn’t find it interesting too. He spent many long nights in front of the school’s computer and the next day asleep in class. After leaving school, he almost lost himself from the world of computers at the end of Bill’s first year. Allen came close to him so that they could follow some of their ideas. That summer they got job in Honeywell. Allen kept on pushing Bill for opening a new software company. 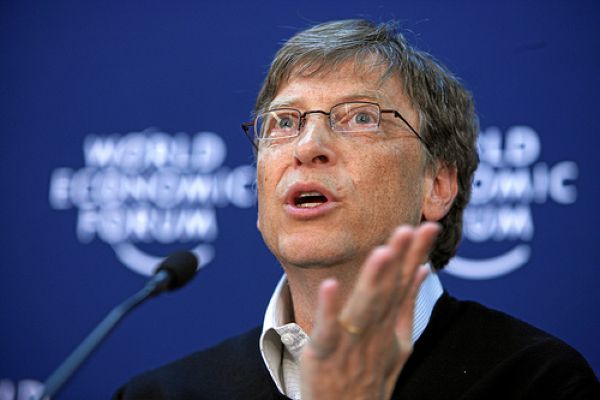 Within a year, in 1975, before graduation gates left Harvard to form Microsoft with his childhood friend Paul Allen. This pair planned to develop software for the newly emerging personal computer market. Bill Gate’s Microsoft became famous for their computer operating systems and killer business deals. For example, Bill Gate talked with IBM for letting Microsoft to retaining the licensing rights of MS-DOS and operating system that IBM needed for their personal computer. Gates then succeeded in making a fortune from the licensing of MS-DOS.

Many criticize Gates not just for his success, but because they feel he tries to unfairly and maybe even illegally dominate the market. As a result of Microsoft’s market control, the U.S. Department of Justice brought an antitrust lawsuit against the company in 1998, saying the company had an illegal stronghold on the software industry.

Gates maintained Microsoft’s success over rivals such as Oracle and IBM was simply the result of smart, strategic decision making. U.S. District Judge Thomas P. Jackson did not agree, and in November 1999, he found Microsoft to be a monopoly that had an exclusive control that used its market power to harm competing companies. Because of the ruling, Gates faced the prospect of breaking up Microsoft.

On January 13, 2000, Gates handed off day to day management of Microsoft to friend and right hand man Steve Ballmer, adding chief executive officer to his existing title of president. Gates held on to his position as Chairman in the reshuffle and added the title of chief software architect.

While working with the Computer Center’s PDP-10, Gates was responsible for what was probably the first computer virus, which is a program that copies itself into other programs and ruins data. Discovering that the machine was hooked up to a national network of computers called Cybernet. Gates invaded the network and installed a program on the main computer that sent itself to the rest of the network’s computers and cybernet crashed. When Gates was found out, he was severely punished, that caused him to stay away from computers for his entire junior year at Lakeside.

Gates and his friend Allen first wrote a BASIC interpreter for the Altair computer. BASIC being a simple and interactive computer language designed in the 1960s and ‘interpreter’ program that executes a source program by reading it one line at a time and performing operations immediately.

There were many other interests that Bill Gates had of which were encompassing medicine and the arts. In 1989 he started a company called Corbis. Corbis owns the rights to 800,000 digitized images. The images are licensed by newspapers and magazines and published by them either in print or electronic form. Another interest of his is biotechnology because of the breakthroughs that have occurred using this technology. He believes that with the internet, researchers will be able to communicate faster with each other. Finding the best way to treat or prevent illness is important to Gates. He donated $1.5 million in 1998 to the International Aids Vaccine Scientific blueprint project in the hope of developing a vaccine for Aids.

By the end of 1988, Gates was worth around $39 billion, making him the wealthiest man who is self made in the whole world. In 1997, Microsoft recorded a net income of $3.4 billion. This made up 41% of the profits of the 10 largest publicity traded software companies. Windows 98 and 95 were released in this time period and they got a huge response from the world.

Gate’s competitive drive and fierce desire to win have made him the most powerful force in the software industry. According to the record it took a lot of his personal life and in the six years between 1978 & 1984 he took a total of only two weeks vacation.

Microsoft’s vision is “A computer on every desk and Microsoft software on every computer”. Bill is a visionary person and works very hard to achieve his vision. His belief in high intelligence and hard work has put him where he is today. He does not believe in mere luck or God’s grace, but just hard work and competitiveness. Bill’s Microsoft is good competition for other software companies and he will continue to stomp out the competition until he dies. His beliefs are so powerful, which have helped him increase his wealth and his monopoly in the industry. He is quite giving person when it comes to computers, internet and any kind of funding. Some years back, he visited Chicago’s Einstein Elementary School and announced grants benefiting Chicago’s schools and museums where he donated a total of $110,000, a bunch of computers, and provided internet connectivity to number of schools. Secondly, Bill Gates donated 38 million dollars for the building of a computer institute at Stanford University. Gates plans to give away 95% of all his earnings when he is old and gray.