Toyota manufactures cars, which has a wide coverage from economic minibus to luxurious cars, SUV. The brand on sell includes Crown, Reiz, Vios, Corolla, Coaster and Prius. And Prius is the brand or car that Toyota has made a significant success in American market. It is a hybrid vehicle. What are the characteristics of it?

Toyota Prius is the first mass produced hybrid car and the car is rated as the cleanest car sold in the United States, which was launched in US in 2001. The company sold close to 8 million units till date and more than half of the sales come from the US market. The word Prius in Latin means “before” and the reason why Toyota choose this name was to highlight the fact that the company is more focused on   environmental awareness and protection even before the whole auto industry started to focus on the environmental pollution caused by cars through the emissions. Toyota pioneered the concept of environmental friendly cars and also alternative fuel cars as the worldwide fossil fuel reserves like crude oil are exhausted and the cars need to have alternative fuel for running them. Toyota management had encouraged the development hybrid concept car that works on both gasoline and electricity and the current models also include the full electric car. Toyota Prius series created a new market segment of consumers who are highly environmental conscious and also gave an opportunity to all those consumers who want to focus on  saving the environment as global warming due to carbon fuel emissions had become a major concern worldwide. 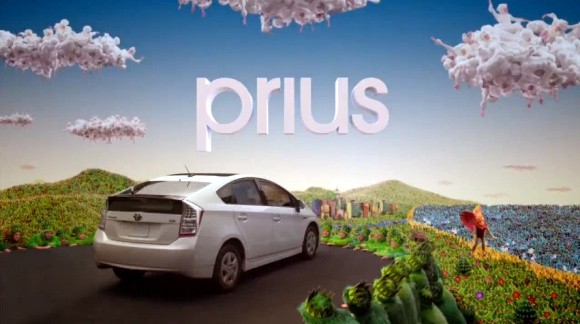 Then, have a look back at Toyota’s history to find new Toyota has made its way to America. In 1957, Toyota exported to America at the first time and established the selling company. In 1984, a joint venture was established with General motor. Co. And in 1997, Prius was first in production and had a launch in America. It was such a great success that Toyota conquered American market. To dig into the reasons, it was largely contributed to the micro and macro environment at that time.

First, let’s have a look at micro-environments. We all know that American love cars so much. And due to oil crisis, Americans changed the need structure for cars, converting their needs to oil saving cars. While American car manufactures lacked producing such cars, then Toyota caught that opportunity and tried to occupy this niche market.

Toyota’s competitor at that time was Honda. It started to develop the hybrid car almost at the same time as us. It introduced the insight. Afterwards, but It didn’t sell well because of its poor design. As a result, Toyota got the first place in America. However, Toyota had no competitors in local at that time. GE and Ford were followers later.

In the macro environment there are many young men who love technique and pursue new technology products. And they are also highly educated and so have a strong environmental protect spirit. And Prius is just the combination of the concepts of environment and technology. Other factors are natural resources and pollution. Before the environment problem and energy crisis come into people’s attentions, Toyota began to research and develop the hybrid cars with a long term view, which was designed to reduce oil consumption and gas emissions.

In a country where everyone was ecstatic when governments raised speed limits above 55 mph, why would the Prius be so successful? For the first model, the answer lies in Toyota’s clever marketing campaign. To begin with, it wasn’t aimed at the mass market. Instead, Toyota thought that the first hybrid buyers would be “techies” and early adopters (people who are highly likely to buy something just because it’s new). The company was right. Once Toyota identified the target market, it was able to educate the right consumers 2 years before introduction. The company established a Web site to distribute information and set 3-brochures to 40,000 likely buyers just before the introduction. The press was also excited about the technology. Auto magazines, and even general interest media, ran articles describing, enthusing, or belittling the hybrids. All of this coverage helped Toyota sell 1,800 cars immediately.

In all, Toyota spent $15 million in 1997 touting the Prius. There were print ads in magazines such as Newsweek and Vanity Fair, but the bulk of the campaign was in television advertising on channels such as Discovery, the History Channel, the Learning Channel, and MSNBC. These ads helped to position Toyota as an “environmentally concerned” company and more subtly stressed the technology aspect of the car. After all, Americans love technology and are quick adopters of it.

After introduction, the ads appealed more to emotion with taglines such as “When it sees red, it charges”––a reference to the recharging of the battery at stoplights. Such ads are based on ambiguity where the headline attracts attention because its meaning is not clear. The consumer must process the information in the ad in order to interpret it. The result is higher ad impact and longer ad recall. Toyota also took advantage of the environmental appeal by sending out green seed cars shaped like Toyota’s logo to prospective buyers on Earth Day. They also wrapped some Priuses in green and gave away cars at Earth Day events.

Much of the Prius’s success is based on correct identification of the target market. Many early purchasers were attracted by the technology, began to modify cars, and shared their experiences through chat rooms such as Priusenvy.com.

Even though the Internet played a major part in the Prius launch, Toyota does not sell the car from its Web site. Buyers go to www.prius.toyota.com online to look at colors and decide on options such as CD players and floor mats. After that, the dealers get involved, but it takes specially trained salespeople to explain and promote the Prius. Therefore, Toyota is planning to launch and educational campaign aimed at salespeople and consumers.

Strategies After the Year 2004

After Toyota’s success in Hybrid car, many competitors came up. Honda is another Japanese automaker. Ford began production of a hybrid model of the Escape SUV, giving consumers a choice of a hybrid or regular model. To promote the hybrid, Ford began an environmental print campaign built around mileage, emissions and other environmental concerns. GM is following the similar strategy, putting hybrid technology in vehicles that use the most gas. It has also developed a hybrid model of its Silverado truck.

Although so many competitors come up, they are followers. Toyota is still the market leader because of its more mature technology than other automakers and the reputation it made and because Toyota is the first to come into this niche market. In order to keep its advantages Toyota keeps on updating its technology and its Lexus division introduced a Lexus SUV hybrid, moving Hybrids up to the luxury car level.

Thus, Toyota has a big jump on US automakers who have only dabbled in this market at that time. So hybrid has taken a seat from medium car level to the luxury car level and until now Toyota is updating the hybrid technology and improving the performance of the hybrid car. Now the newest model is 2008 Prius model. The effort of Toyota makes common consumers remember Toyota every time someone mentions hybrid.

Now in the car market, most people still like stockcar racing, and SUV vehicle is still appealing to people’s taste. But as the gasoline price increases these years and people’s environmental protection awareness chances, the hybrid car which brings fuel efficiency and low emissions will become more and more popular in the future. And the competition will become more and more violence. So Toyota should keep on producing hybrid cars and updating technology.