Peter Drucker advises organizations that wish to innovate to use a separate team or department:  “For the existing business to be capable of innovation, it has to create a structure that allows people to be entrepreneurial… This means, first, that the entrepreneurial, the news, has to be organized separately from the old and the existing. Whenever we have tried to make an existing unit the carrier of the entrepreneurial project, we failed.” 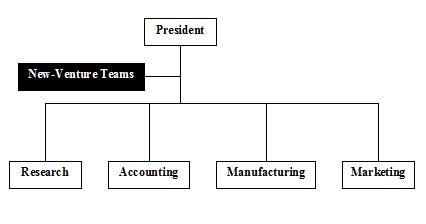 For a giant corporation such as IBM, new-venture teams free people from the constraints of the large organization. IBM was one of the first companies to use the new-venture team successfully, and its genius was to suspend normal product development practices. IBM has started 14 new-venture units. Each is tiny company-within-the-company that explores areas of customized software, robots and electrocardiographs. IBM’s biggest success — the personal computer — was built by a new-venture group. The PC new-venture team was so appealing that 5,000 employees applied for the initial 50 positions. Other companies that have created new-venture units are Monsanto, Levi Strauss, Exxon, Du Pont, Dow, and Motorola.

One variation of venture teams used by some companies is called skunkworks. Skunkworks are small, informal, and sometimes unauthorized groups that create innovations. Companies such as Kollmorgen, IBM, Merck, Philip Morris, and Macy encourage employees to form informal groups, often working nights and weekends, to develop a new idea. If the new venture is successful, group members are rewarded and encouraged to run the new business.

Another variation of new-venture teams is the new-venture fund, which provides resources from which individuals and groups can draw to develop new ideas, products, or businesses. For example, Teleflex, a producer of many technical and consumer products, allocates one-half of one percent of sales to a new-venture fund. More than $1 million dollars was allocated to employees in 1988 to explore new ideas.