Vijay Govindarajan and Chris Trimble, in their book on Reverse Innovation defined the term “Reverse Innovation”; they define it as any idea, which will be first adopted in developing world. This phenomenon was not very common in the past for a simple reason that the rich and affluent that had the ability to demand were mostly concentrated in developed nations. Demand drove the technology and hence most of innovations happened in the west. United States and Germany have about 300 noble laureates in science and technology, while India and China who are six times in population have less than ten of them in total. Most of the solutions that were innovated in the west were hence imported. Slightly modified versions of the global products, mostly their low-end were “Glocalized” and were seem to be most relevant. 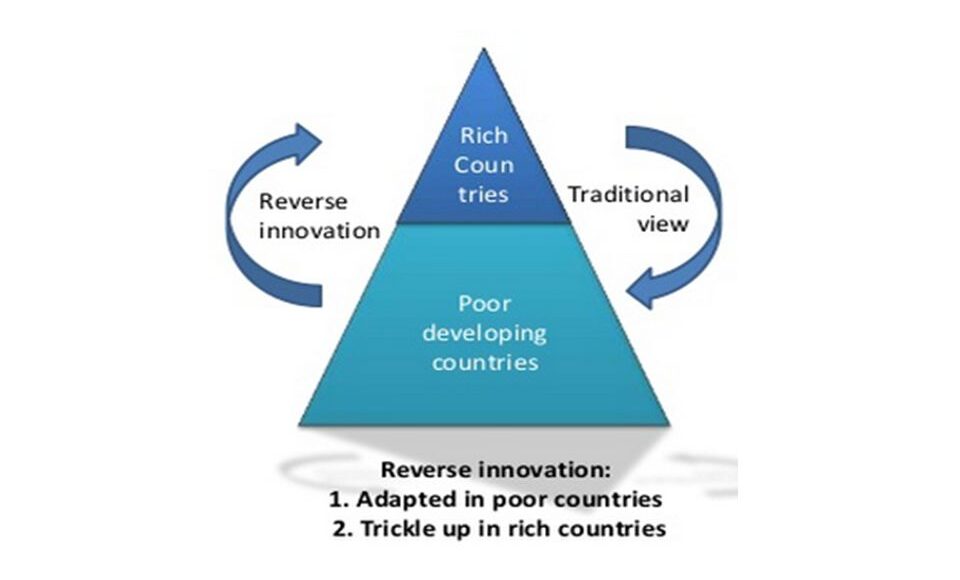 This view, over time, is seemed to be no longer accurate. The nature of consumers in developing nations is lot different. The needs of affluent customers in the west are lot different from those in emerging economies. Emerging economies have mega markets with micro consumers. Simply put, if developed countries have few customers who could spend ten dollars each, the developing countries have hundreds who are willing to pay one dollar. The profile of these two customers is hugely different and the scale that latter would offer makes it a greatly attractive market. Hence, Reverse Innovation requires a thorough understanding of the gaps in the needs of the customers worldwide.

While the traditional innovations assume that the resources available are redundant, Reverse Innovation at the outset assumes them to be scarce. This assumption forces one to think of the solution to be improvised solution using ingenuity. Most often the reverse innovation could begin with reverse engineering and come up with flexible solution to meet the challenge of shortage of resource. Traditionally the freedom to innovate was restricted to an elite class seated in huge sophisticated laboratories, most of the times in the headquarters in the west. They conceived ideas and solutions which percolated to teams offshore to support in specific functionalities. While this process ensured confidentiality to maintain the intellectual property of the firm at all the levels. The major disadvantage was the visibility of this elite class to the global markets was restricted. With the changing innovation scenario, even the paradigm of process of innovation is shifting. Most of innovators today are the young brains coming from the bottom of the organizational pyramid, which have the visibility into the local customer problems purely on need basis. These innovators need not be elite PhDs, but a common man who is facing a problem and needs a solution to address the problem at an affordable price. Conventional process improvement strategies like Six Sigma, which could fit well for markets with predictable environment, may not be applicable for these markets as the hunger for cost effective solutions is increasing the need to disrupt from current and create new ideas.

While there are several theories proposed in recent times on adoption of frugal engineering and reverse innovation process, the simple way to define a framework to generate a cost effective solution that works constrained environment could be defined in three simple steps mentioned below –

Gaps in Needs of Customers

The five needs gaps, as identified by Vijay Govindarajan et al, as the starting points for reverse innovation opportunities are:

While these gaps clearly establish that the consumers in developing nations need to be looked as a unique set of parameters, most of these needs are not very new in developed world. Every developed country also has a marginal market with needs similar to those of developing countries; historically the large multinationals have been ignoring them given the size of that market. Hence, it can be well understood that a product designed to bridge the gaps above could well be fitting into the marginal markets of the developed countries.

Most relevant example could be of Tata Nano, one of recent innovations in India of a Car at an ASP of about $2500. This ultralow cost was only a result of lot of new designs, frugal engineering and innovative supply chain partnerships. At the outset, this experiment was aimed at the capitalizing the growing Indian (lower) middle class market, amongst which about 60% could afford it, and who otherwise could not have dreamt of a four-wheeler vehicle. However, TATAs are seeing this car also being “export” ready to tap into the marginal markets of the West.

Another similar example could be drawn on “Micro finance” model. Historically banking has always been focused on addressing the needs of “rich”. Globally most of the successful banks failed to consider the opportunity to be able to lend smaller amounts to poor and enable them small business capitals. While this has a greater social implication of creating a better ecosystem, the smaller quicker returns coming from larger number of customers could turn banks profitable. The Grameen bank in Bangladesh is a proof of this successful model, and Muhammad Yunus, the brainchild behind this model has won a Noble prize for pursuing the microfinance revolution in Bangladesh. This solution is now getting popular in west, where many large banks.

These are classic cases of business innovations that are created primarily to address the needs in the developing worlds while still being seen relevant in global context, in terms of the untapped markets in the west. The key aspect to note here is that these are not to be seen as the “low cost” or “cheap” solutions but are able to serve “mission-critical” value to the customers, which is supposed to be the bare bone for any solution.