An innovation is a product or service with a bundle of features that is new in the market, or that is commercialized in some new way that opens up new uses and consumer groups for it. Innovation is invention implemented and taken to market. Invention however is the creation of something that was previously unknown. In summary, INNOVATION= INVENTION+COMMERCIALIZATION. Today companies who, want to deliver consistent organic growth to their shareholders, customers, and their employees can do that only through innovation.

According to American organizational theorist Henry Chesbrough, Open innovation is the use of purposive inflows and outflows of knowledge to accelerate internal innovation, and expand the markets for external use of innovation, respectively. Open innovation assumes that firms can and should use external ideas as well as internal ideas, and internal and external paths to market, as they look to advance their technology.

As mentioned by Chesbrough, there are a total of 5 paths to “Open Innovation”. 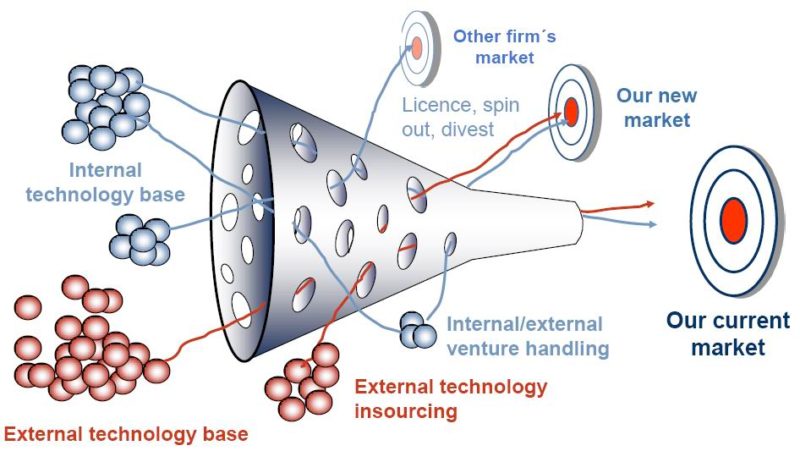 The 5 paths are very important in helping use to understand why firms are moving towards the open innovation business model.

The Closed Innovation – Opposite of Open Innovation

In order to understand “Open Innovation” better, we will need to know the opposite of it- the “Closed Innovation”. In short, “Close Innovation” is a paradigm that successful innovation requires control and ownership of the Intellectual property (IP). A company should have full control of everything that relates to ideas. Some companies therefore decided to run their own research and development (R&D) units. The entire new product development cycle was then incorporated within the company where innovation was done in a “closed” and self-supporting way.

It has always been the case whereby internal Research and Development (R&D) was regarded as a strategic asset and it creates barrier to competitive entry in many industries. Only bigger firms with substantial resources and long-term research programs are capable to compete within their respective industries. This eventually led to higher profit margin as well. Competitors had to start their own laboratories using their own resources in order to compete. Therefore firms invested heavily in internal R&D, which eventually led them to breakthrough innovation that enabled them to create new products and services to generate more revenue and profit margins.

Therefore the protection of intellectual property in a closed innovation paradigm is very tight. It is so tight that firms will store their technologies until they are ready to use it. In the meantime, firms will also minimize or rather ensure zero leakages incident of information that relate to the technology.

One major difference between closed and open innovation are how firms filter their ideas. In any R&D process, researchers must separate the bad proposal from the good ones and eventually only the good proposal will be commercialized and the bad ones will be discarded. Both open and closed model can remove “false positives” (that is bad ideas that initially look promising), but open innovation can revived these “false positive “and “false negatives” (ideas that initially seem to lack promise but turn out to be surprisingly valuable) to recoup losses incurred during the R&D process. A classic example will be Xerox and Palo Alto Research Centre (PARC). Researcher there developed many breakthrough technologies such as Ethernet and Graphical User Interface (GUI). However Xerox main focus is on high speed printer and copier, hence these technologies were not viewed as promising by the firm. This is what we call “false negative”. GUI was eventually used by APPLE in Macintosh operating system and Microsoft in Windows operating system respectively.

Today, in many industries, the traditional logic of supporting an internally oriented, centralized approach to R&D has become obsolete. Ideas must be used with alacrity as useful information and knowledge can be obtained easily. A firm’s ability to exploit external knowledge is a critical component of innovative capabilities instead of exploiting only internal knowledge. In short, firms that can integrate external ideas to advance their own businesses while leveraging their internal ideas outside their current operations will likely thrive in this new era of open innovation.

Also, ideas can no longer be stored on the shelf anymore. Failure to utilize own technologies might result in firms seeing their own technologies ended up being exploited by other firms. This is due to a widespread of knowledge pool among companies, customer, suppliers and other parties. Hence the closed innovation business model is once again proven to be less useful to many firms.

Rising development costs and shorter product life-cycles has resulted in firms finding it increasingly difficult to justify investments in innovation. This actually made the open innovation model important. It is very important for firms to process knowledge at a faster pace to prevent worker and venture capitalist to steal their ideas.

It is not surprising at all that external suppliers offer better quality work of what a company can achieve internally. Hence, in today context, most of the bigger firms actually engage the services of external suppliers so that they can apply their investment to cover more areas in less time. However it is important to note that this allows other firms to move faster and cover new markets as well. An example of this would be Samsung and Apple. Apple’s A5 chip is built by Samsung – the processor that powers Apple’s iPhone 4S and iPad 2 is being manufactured in Texas by rival Samsung.

As mentioned earlier that a company such as Xerox it is too focus internally (closed innovation approach) will eventually miss out numerous opportunities because many will fall outside the firm’s current businesses or will need to be integrated with external technologies to unleash their full potential. As R&D functions are organised as separate function within organisations, there bound to have some technologies that are under- or unutilised. These ideas are kept on the shelf of the knowledge bank until downstream business is ready and willing to use them.

Firms will do well if they are able to make full use of extensive technologies. It’s also possible to innovate with discoveries of others. Firms can leverage on external knowledge instead of ignoring it and pursuing only internal R&D. Valuable ideas come from inside or outside the company and can go to market from inside or outside the company as well. Both external and internal ideas are equally important. Firms can focus on a particular area without having to do everything. Therefore Open Innovation offers lower costs for innovation, faster times to market, and risk sharing with others.

Open innovation does not mean that internal R&D must be removed from a firm’s R&D process. A firm can achieve additional benefits when implementing internal R&D in Open Innovation context as the internal R&D can fill the gaps (leveraging on external) in what others are doing. Firms that adopt “Open Innovation” business model do not need to invent the most novel or best technologies and knowledge in order to thrive and lead in their respective industry. Firms just need to be sure that they are making the best use of internal and external knowledge in a timely manner and innovate to create new products or services.

Smaller firms such as SMEs have more reasons to move towards the “Open Innovation” business model. This is because they have less internal R&D capability, less market power which mean weaker ability to capture value and IP enforcement are often costly to them. Markets that is too small for larger firms might be attractive for SMEs. Smaller firms are able to execute plans at a faster rate because there are less internal politics. Eventually larger firms will value this collaboration with smaller firms and they will create platforms that seek supporting investment from SMEs and SMEs can expand globally at a lower cost.

As for larger firms, the “Open innovation” business model plays an important role. Radical innovations were viewed as an approach to generate growth for large established company as they depend on breakthrough innovation to move to the next platform for growth. However larger firms are lacking of supportive infrastructure to enable breakthroughs to be commercialized. Open innovation model can aid firms in building this supportive infrastructure. Larger firms can then focus on building deeper core competencies.

Firms can benefit from innovation even if they do not own the technologies they use. An example would be computer processor maker, Intel. Intel has been successful for years without conducting much basic research on its own. All development took place within existing production laboratories as Intel does not have any development facilities. However Intel decided to take a change at a later stage, three research laboratories with different focus in their respective areas were established later.

In addition to that, Intel actively promotes linkages between its research laboratories and external research community. They held conferences, research forums and seminars in attempt to bring both internal and external researches together. Strong connections between them and newly incorporated firms allow Intel to extend its business strategy by leveraging on the advantages that these start-ups possessed. Intel benefited tremendously from this far-sighted approach with corporate venture capitalist.

To sum up, Intel actually adopted the third and fourth path to “Open Innovation” as mentioned earlier. Their primary focus is on accessing and leveraging on external knowledge.

Example 2: The Rise of Adobe

We all know that Adobe systems owe its success to their first product, the PostScript. Postscript created a new industry segment within personal computer industry, known as desktop publishing.

“This technology was initially developed within Xerox’s Palo Alto Research Center (PARC). Within PARC, what was then called Interpress was a means of allowing Xerox’s laser printers to print what was displayed on a Xerox Star workstation. This capability became known as WYSIWYG, or “what you see is what you get.” John Warnock and Charles Geschke, who both worked on this technology while at PARC, wanted to create a standard around Interpress. However, their management within Xerox resisted this, because they did not want to give away one of the primary differentiating features of the Star system.” – Intel ® Technology Journal

From the extract above, we can see that both John and Charles innovation does not look promising to PARC at that point of time. Eventually Hewlett Packard and Canon agreed to bundle in the Technology which was later labeled as PostScript as a standard item in their laser printers, while Apple agreed to support PostScript in its software.