Organizational Conflicts are resolved mostly through behavioral measures. Thomas-Kilmann Conflict Mode Instrument is one of the tools used to assess an individual’s behavior in conflict situations. Research has shown that there are five basic styles or modes for handling conflict. The Thomas-Kilmann Conflict Mode Instrument provides a profile of individuals and teams that indicates the gamut of conflict-handling skills which one uses in the kinds of conflict situations one faces. Five basic ways of addressing conflict, namely Avoidance, Collaboration, Compromise, Competition and Accommodation were identified by Thomas and Kilman. This is suited for organizational conflicts. 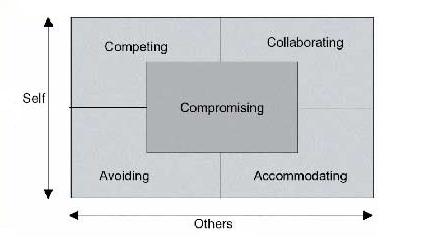 Avoid or postpone conflict by ignoring it, changing the subject, etc. Avoidance can be useful as a temporary measure to buy time or as an expedient means of dealing with very minor, non-recurring conflicts. In more severe cases, conflict avoidance can involve severing a relationship or leaving a group. If we avoid discussing the conflict at all, both parties may remain clueless about the real underlying issues and concerns, only to be dealing with them in the future. Avoiding is a common response to the negative perception of conflict. “Perhaps if we don’t bring it up, it will blow over,” we say to ourselves. But, generally, all that happens is that feelings get pent up, views go unexpressed, and the conflict festers until it becomes too big to ignore. Like a cancer that may well have been cured if treated early, the conflict grows and spreads until it kills the relationship. Because needs and concerns go unexpressed, people are often confused, wondering what went wrong in a relationship.

Work together to find a mutually beneficial solution. While the Thomas Kilman grid views collaboration as the only win-win solution to conflict, collaboration can also be time-intensive and inappropriate when there is not enough trust, respect or communication among participants for collaboration to occur. Collaborating is the pooling of individual needs and goals toward a common goal. Collaboration requires assertive communication and cooperation in order to achieve a better solution than either individual could have achieved alone. It offers the chance for consensus, the integration of needs, and the potential to exceed the “budget of possibilities” that previously limited our views of the conflict. It brings new time, energy, and ideas to resolve the dispute meaningfully. If we collaborate, we may not gain a better solution than a compromise might have yielded, but we are more likely to feel better about our chances for future understanding and goodwill.

Find a middle ground in which each party is partially satisfied. Compromising is an approach to conflict in which people gain and give in a series of trade-offs. While satisfactory, compromise is generally not satisfying. We each remain shaped by our individual perceptions of our needs and don’t necessarily understand the other side very well. We often retain a lack of trust and avoid risk-taking. If we compromise, we may feel OK about the outcome, but still harbor resentments in the future.

Assert one’s viewpoint at the potential expense of another. It can be useful when achieving one’s objectives outweighs one’s concern for the relationship.  Competing is a style in which one’s own needs are advocated over the needs of others. It relies on an aggressive style of communication, low regard for future relationships, and the exercise of coercive power. Those using a competitive style tend to seek control over a discussion, in both substance and ground rules. They fear that loss of such control will result in solutions that fail to meet their needs. Competing tends to result in responses that increase the level of threat. If we use a competing style, we might force the others to accept ‘our’solution, but this acceptance may be accompanied by fear and resentment.

Surrender one’s own needs and wishes to accommodate the other party. Accommodating, also known as smoothing, is the opposite of competing. Persons using this style yield their needs to those of others, trying to be diplomatic. They tend to allow the needs of the group to overwhelm their own, which may not ever be stated, as preserving the relationship is seen as most important. If we accommodate, the relationship may proceed smoothly, but we may build up frustrations that our needs are going unmet.