Conflict occurs at various levels within the individuals, between the individuals in a group and between the groups in an organisation. An issue between two or more parties who have (or think they have) incompatible goals or ideas. Conflicts may involve deep-rooted moral or value differences, high stakes distributional questions, or can be about who dominates whom. Conflict is a perpetual given of life, although varying views of it may be held. Some may view conflict as being a negative situation which must be avoided at any cost. Others may see conflict as being a phenomenon which necessitates management. Still others may consider conflict as being an exciting opportunity for personal growth and so try to use it to his or her best advantage. 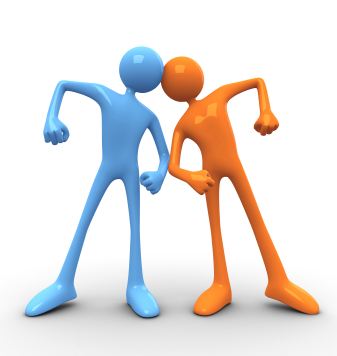 “Working together is not always easy”, it is because of conflict. Conflict is a part of everyday life of an individual and of an organization. It has a considerable impact on employee’s performance, satisfaction and behavior. It is not possible to compress the essential ingredients of conflict in a precise definition because it may take several forms.In simple words it can be explained as a collusion and disagreement. The conflict may be within an individual, between two or more individuals or between two or more groups within an organization.

Sources of Conflict in Organizations

Vertical conflict refers to conflicts that occur between individuals at different levels. Conflict between the superior and subordinate is an example of vertical conflict. Such conflicts could happen because of perceived transgression of psychological contract, inadequate and /or ineffective communication, selective perceptions, misperceptions, incongruence in goals, values, cognition, affect, and behavior and any number of other reasons.

Line-staff conflict refers to the conflicts that arise between those who assist or act in an advisory capacity (staff) and those who have direct authority to create the products, processes, and services of the organization (line). Staff manager and line managers usually have different personality predispositions, and goals, and come from different backgrounds. Staff managers have specialized skills and expertise acquired through raining and education and have greater technical knowledge which is intended to help the line managers who are basically money makers for the organization. Staff people serve as advisors for the line people in as much as they have the expertise to streamline methods and help in cost-cutting mechanisms. Line managers may, however, feel that the staff people are a nuisance, coming in the way of their performance by always telling them how to do their jobs and thrusting their ideas and methods. It is not unusual for line people to resent the fact that they have to be “advised” by the staff people. The staff people often frustrated that the line people do not consider all the ideas put forth by them and thereby fail to benefit.

Role Conflicts arise because different people in the organization are expected to perform different tasks, and pressures build up when the expectations of the members clash in several ways. This could be either because of:

An example of the inter-sender role is the president asking the manager to write up the report on the new project and submit it in the next four days, and the auditor asking the same manager to go with him to audit the branch offices today, tomorrow, and the day after! Here, the manager cannot possibly fulfill both role expectations. Inter role conflict can be experienced by a supervisor who just attended the manager’s conference where he has been told that strict action should be taken against a group of strikers, and the same supervisor who is also   the member of the union being told that, “supervisors should protect the employees from harm”. Here the supervisor’s membership to the two groups results in conflicting loyalties and role expectations. Intra-sender role conflict will be experienced by a supervisor who is asked to get a lot of her section’s work done, while also being asked to take charge of another section because the supervisor of that section is on a week’s casual leave without a replacement. Person-role conflict is likely to be experienced by an individual who is asked by the boss to bribe a government officer to get the job done for the department.

Thus, interpersonal and inter group conflicts often arise when there is disagreement regarding goals or the methods of attaining them. These conflicts can be either constructive or destructive for the people involved. Several methods exist for resolving conflict and they vary in their potential effectiveness. A key revolves around intended outcomes for oneself and others.

Strategies for Managing Conflict in Organizations

The following methods may be used by the management to stimulate conflict.

To prevent conflicts, the following strategies may be employed:

Some of the common approaches towards conflict resolution are as under:

One thought on “Conflict in Organizations”