As a metaphor for the Internet, “the cloud” is a familiar cliche, but when combined with “computing,” the meaning gets bigger and fuzzier. Some analysts and vendors define cloud computing narrowly as an updated version of utility computing: basically virtual servers available over the Internet. On the other hand others go very broad, arguing anything you consume outside the firewall is “in the cloud,” including conventional outsourcing.

The most common analogy to explain cloud computing is that of public utilities such as electricity, gas, and water. Just as centralized and standardized utilities free individuals from the vagaries of generating their own electricity or pumping their own water, cloud computing frees the user from having to deal with the physical, hardware aspects of a computer or the more mundane software maintenance tasks of possessing a physical computer in their home or office. Instead they use a share of a vast network of computers, reaping economies of scale.

As mentioned above the term “cloud computing” originated from the cloud symbol that is usually used by flow charts and diagrams to symbolize the internet.

“Comes from the early days of the Internet where we drew the network as a cloud… we didn’t care where the messages went… the cloud hid it from us” — Kevin Marks, Google 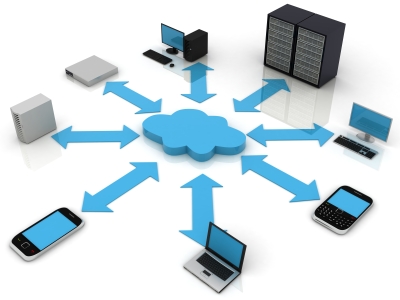 The principle behind the cloud is that any computer connected to the internet is connected to the same pool of computing power, applications, and files. Users can store and access their own personal files such as music, pictures, videos, and bookmarks or play games or use productivity applications on a remote server rather than physically carrying around storage medium such as a DVD or thumb drive. Almost all users of the internet may be using a form of cloud computing though few realize it.

However The National Institute of Standards and Technology (NIST) provides a concise and specific definition: “Cloud computing is a model for enabling convenient, on-demand network access to a shared pool of configurable computing resources (e.g., networks, servers, storage, applications, and services) that can be rapidly provisioned and released with minimal management effort or service provider interaction.”

To understand the concept of cloud computing, in other words computing as a utility rather than a product, one must compare it to other utilities. Without public utilities such as electricity, water, and sewers, a homeowner would be responsible for all aspects of these concerns. The homeowner would have to own and maintain a generator, keeping it fuelled and operational and its failure would mean a power outage. They would have to pump water from a well, purify it, and store it on their property. And they would have to collect their sewage in a tank and personally transport it to a place where it could be disposed of, or they would have to run their own personal sewage treatment plant.

Since the above scenario not only represents a great deal of work for the homeowner but completely lacks economies of scale, public utilities are by far the more common solution. Public utilities allow the homeowner to simply connect their fuse box to a power grid, and connect their home’s plumbing to both a water main and a sewage line. The power plant deals with the complexities of power generation and transport and the homeowner simply uses whatever share of the public utility’s vast resources he needs, being billed for the total.

By way of comparison, a typical home or work computer is an extraordinarily complex device and its inner workings are out of the reach of most users. A computer owner is responsible for keeping their machine functional, organizing their data, and keeping out viruses and hackers. When computing power is contained at a specialized data centre, or “in the cloud”, the responsibility for performing these complicated maintenance tasks is lifted from the user. The user becomes responsible only for maintaining a very simple computer whose purpose is only to connect to the internet and allow these cloud services to take care of the rest.

When a user accesses the cloud for a popular website, many things can happen. The user’s IP address, for example, can be used to establish where the user is located (geolocation). DNS services can then direct the user to a cluster of servers that are close to the user so the site can be accessed rapidly and in the user’s local language. Users do not log in to a server, but they log in to the service they are using by obtaining a session id or a cookie, which is stored in their browser.

What the user sees in their browser usually comes from a cluster of web servers. The web servers run user interface software which collects commands from the user (mouse clicks, key presses, uploads, etc.) and interprets them. Information is then stored on or retrieved from the database servers or file servers and an updated page is displayed to the user. The data across the multiple servers is synchronised around the world for rapid global access.

Companies can use cloud computing to effectively request and use time-distributed computing resources on the fly. For example, if a company has unanticipated usage spikes above the usual workload, cloud computing can allow the company to meet the overload requirements without needing to pay for hosting a traditional infrastructure for the rest of the year[1]. The benefits of cloud computing include that it can minimize infrastructure costs, save energy, reduce the necessity and frequency of upgrades, and lessen maintenance costs. Some heavy users of cloud computing have seen storage costs fall by 20% and networking costs reduced by 50% [2].