In this article  business value of cloud computing will be discussed. In deciding whether hosting a service in the cloud makes sense over the long term, it is argues that the fine-grained economic models enabled by Cloud Computing make trade-off decisions more fluid, and in particular the elasticity offered by clouds serves to transfer risk.

As well, although hardware resource costs continue to decline, they do so at variable rates; for example, computing and storage costs are falling faster than WAN costs. Cloud computing can track these changes and potentially pass them through to the customer more effectively than building one’s own datacenter, resulting in a closer match of expenditure to actual resource usage.

In making the decision about whether to move an existing service to the cloud, one must additionally examine the expected average and peak resource utilization, especially if the application may have highly variable spikes in resource demand; the practical limits on real-world utilization of purchased equipment, and various operational costs that vary depending on the type of cloud environment being considered.

Although the economic appeal of Cloud Computing is often described as “converting capital expenses to operating expenses” (CapEx to OpEx), we believe the phrase “pay as you go” more directly captures the economic benefit to the buyer. Hours purchased via Cloud Computing can be distributed non-uniformly in time (e.g., use 100 server-hours today and no server-hours tomorrow, and still pay only for what you use); in the networking community, this way of selling bandwidth is already known as usage-based pricing. In addition, the absence of up-front capital expense allows capital to be redirected to core business investment. Therefore, even though Amazon’s pay-as-you-go pricing (for example) could be more expensive than buying and depreciating a comparable server over the same period, we argue that the cost is outweighed by the extremely important Cloud Computing economic benefits of elasticity and transference of risk, especially the risks of over provisioning (underutilization) and under provisioning (saturation).

The key observation is that Cloud Computing ability to add or remove resources at a fine grain (one server at a time with EC2) and with a lead time of minutes rather than weeks allows matching resources to workload much more closely. Real world estimates of server utilization in datacenters range from 5% to 20%. This may sound shockingly low, but it is consistent with the observation that for many services the peak workload exceeds the average by factors of 2 to 10. Few users deliberately provision for less than the expected peak, and therefore they must provision for the peak and allow the resources to remain idle at nonpeak times. The more pronounced the variation, the more the waste. 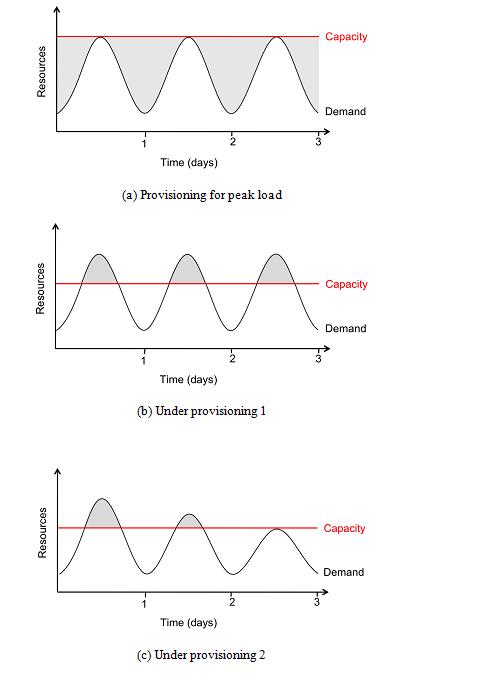 Even less-dramatic cases suffice to illustrate this key business value  of Cloud Computing: the risk of mis-estimating workload is shifted from the service operator to the cloud vendor. The cloud vendor may charge a premium (reflected as a higher use cost per server-hour compared to the 3-year purchase cost) for assuming this risk. We propose the following simple equation that generalizes all of the above cases. We assume the cloud computing vendor employs usage-based pricing, in which customers pay proportionally to the amount of time and the amount of resources they use. While some argue for more sophisticated pricing models for infrastructure services, we believe usage based pricing will persist because it is simpler and more transparent, as demonstrated by its wide use by “real” utilities such as electricity and gas companies. Similarly, it is assumed that the customer’s revenue is directly proportional to the total number of user-hours. This assumption is consistent with the ad-supported revenue model in which the number of ads served is roughly proportional to the total visit time spent by end users on the service.

In above formula the left-hand side multiplies the net revenue per user-hour (revenue realized per user-hour minus cost of paying Cloud computing per user-hour) by the number of user-hours, giving the expected profit from using Cloud computing. The right-hand side performs the same calculation for a fixed-capacity datacenter by factoring in the average utilization, including nonpeak workloads. Whichever side is greater represents the opportunity for higher profit.