The term “Artificial Intelligence” (AI) was first coined by American computer scientist, John McCarthy, in 1955 as a way to describe the science and engineering of making intelligent machines. This concept was based on the conjecture that every aspect of learning or any feature of intelligence in principle can be simulated by a machine as the ultimate effort to reach human-level intelligence. While, the more modern-day definition of this phenomenal change in technology focuses on Artificial Intelligence (AI) being a sub-field of computer science that has the ability to imitate human intelligence such as visual perception, decision-making, speech recognition and the translation between languages. Consequently, these transformations in technology opened up new opportunities for individuals, society and the economy as it provides unprecedented options for a prosperous future. However, despite AI’s intrinsic benefits, the pervasive force is largely attributed to the poor performance of labour markets across advanced economies as it has aggravated the debate about technological unemployment. This is further ascertained by the fact that AI’s acceleration of the automation of tasks that have long required human labour has now been replaced, and the augmentation of human skills through machines has the potential to cause a disruption in society’s current livelihood. 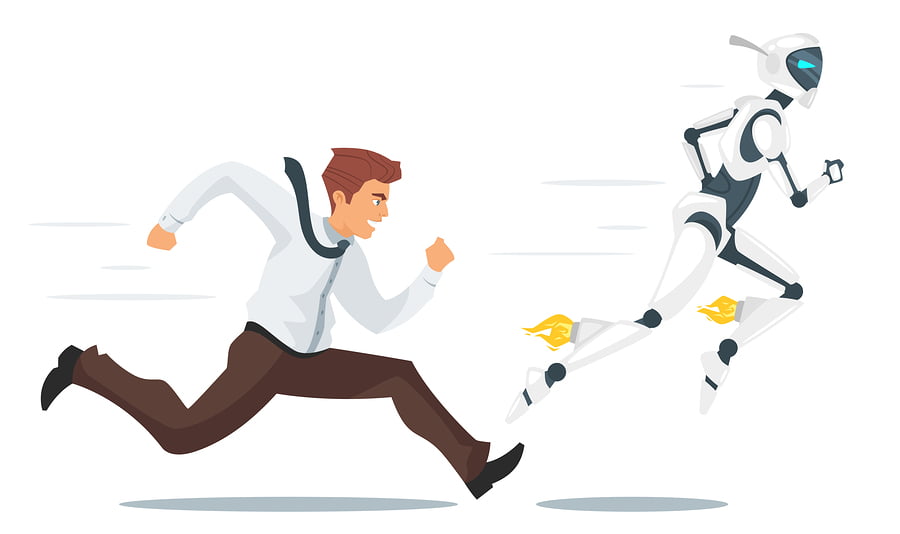 Although there are many ongoing disagreements about the driving forces behind high unemployment rates, one of the most susceptible factors points to the rise of computerisation in labour markets as a possible explanation for low job rates. However, AI’s near-term effect is not mass unemployment but a gradual increase of occupational polarisation whereby a person moves from a mid-skilled job to a low-paid least skill job, which typically requires non-routine manual skills. There are many reasons for the growing employment in high-income cognitive jobs and low-income manual occupations. Firstly, problem-solving skills are becoming more productive due to the fall in the price of computing; hence, there is a substantial growth in employment that consists of cognitive tasks where skilled labour has a comparative advantage. While low-wage jobs require unstructured conversation and extensive, unstructured physical movement which most computing programming cannot abide by. The relative distinction between Artificial Intelligence (AI) and different job level skills is based on the trajectory of current automation trends, and this can be illustrated through the following:

The key conclusion to these findings is that the implementation of technology into the subset of core occupational tasks that were previously performed by middle-skill employees has now caused substantial change and arguably the cause of a structural shift towards lower-income jobs.

However, looking further into the future, a new wave of automation and more advent technological-learning techniques will emerge. In which, these intelligent machines will be increasingly capable of performing high-skilled and possibly non-routine manual tasks. Thus, the real question then becomes: Will AI displace or increase productivity in the labour market? In order to answer this question, the technological breakthrough in labour markets in the Industrial Revolution will firstly be examined. This example can be presented through the case of automobiles in the 1900s. Since the introduction of motor-engineered vehicles, it has revolutionised the mode of transportation as any horse-related jobs were diminished. Though this caused many people to lose their jobs, this change has also opened up new industries, and many new jobs were created. Consequently, dominating the world economy led to an overall net positive impact on employment. Furthermore, more reports that project similar patterns have emerged, and in the short run, the displacement effect may dominate. While in the long run, when society is fully adapted to the insemination of the automation culture, there will be a productivity effect and have a positive effect on employment. But to what extent is this approach reliable? According to the researchers from the Global Mckinsey Institute, the rate of disruption caused by AI is estimated to be happening ten times faster in current society and at a scale of 300 times more than the Industrial Revolution, having approximately 3000 times the impact. Moreover, as Artificial Intelligence is continuously progressing to simulate the complexity of the human brain, the dynamics of these intelligent machines will have additional implications in the labour market.

The second resolution to this matter focuses more on assessing the risks in each of these occupations that are susceptible to automation in the next few decades. The occupations that are most inclined to automation all share a predictable pattern that illustrates the same repetitive activities, that have the possibility to be replicated through machine-learning algorithms. These highly intensive routine occupations that focus on easily programable tasks such as— data entry keyers, new account clerks, assembly line workers, technicians are all particularly vulnerable to the replacement of changing technologies. While some of these occupations are completely eradicated, the demand for others is also reduced.  Due to the decline of occupational growth and the increased adaptation of new automation technology, the rise of inequalities of wages combined with those effects poses a constraint in the economic environment. This is so as the market imbalance and growth-stifling levels of inequality will cause the governmental role to be rectified to fit into a new technological era marketplace, and government intervention will be needed to address the economic imbalance. Although these studies support the displacement effect of automation, it is important to remember that AI is not a single technology, but rather, a collection of technologies that are applied to specific tasks. Furthermore, the impact of new technology on the aggregate labour market is not only dependent on the industry they operate in but also on other spillover effects and adjustments in the economy. Thus, it is difficult to predict AI’s driven automation immediate impact on the economy, as the uneven effect is uncertain due to the variant job scopes within the occupation itself.

Nonetheless, albeit it is more challenging to assess Artificial Intelligences productivity effect on employment, recent innovations in cloud computing and big data storage analysis have helped AI positively by improving efficiency in manufacturing industries. Though many theories careen about the displacement of productivity, AI is, in fact, a paradoxical phenomenon that also acts as a capital-labour hybrid. This is so as the driven automation offers the ability to amplify and transcend the current capacity of the capital and labour to fuel economic growth. Moreover, as these technologies demonstrate progress, productivity improvements, increased efficiencies, safety and convenience in the labour market, the transformation of automation benefits become increasingly clear. According to research, the AI market is valued at USD $1.36 billion and is expected to grow at a compound annual growth rate (CAGR) of 52% during the forecasted period of 2017 to 2025. Furthermore, machine automation produces products that are of higher standards and more efficiently, leading to better business performance overall. In addition to AI’s productivity effect, another core comparative advantage of AI’s driven automation is the absence of human biases. The computerisation of cognitive tasks can be designed to complete a range of jobs through an impartial algorithmic solution that eliminates any potential human errors. Humans, unlike machines, manifest subjective elements such as flawed observations, favourable preferences, skewed data and even a necessity like sleeping poses negative constraints in their occupational performance. Thus, it can be argued that the extension of automation in human labour can enhance labour productivity and obtain higher accuracy in the interpretation of data.

Next, five broad factors that have the ability to influence the pace extent of automation in the future workforce will be examined.

In conclusion, the concept of this futuristic study and its ongoing debate about automation’s impact on mass unemployment will not only reshape national economies and future industries but there will be a structural change in the entire nature of work. Though there are many perceived benefits of the Artificial Intelligence high productivity levels in the workforce, which offers the best opportunities for reversing the slowdown in global output growth resulting from demographics, the offset of lower levels of labour force growth across advanced economies will require a higher productivity growth in order to stabilise the economy. Furthermore, the high displacement effect of robots replacing human activities will also require a frame of a governmental policy response to mitigate the negative effect. However, by examining the positive and negative implications of AI’s effect on the labour market, it is still difficult to predict the potential impact of automation in the labour market with absolute certainty as the complex and dynamic systems of the labour market are constantly evolving.