Situational leadership theory, in simple terms talks about different leadership styles and how a leader can choose an appropriate style with respect to team that he/she is leading and situation in which they are in, to complete the given task. An organization faces different situations in different times depending on many factors, internal and external which are hard to control. Situational leadership theory helps an organization to face this kind of circumstances.

The situational leadership theory was developed by Hersey and Blanchard in the 1960s basing on Reddin’s 3-D framework of leadership. The developmental process of the model focused on three key categories: consideration; initiation of structure; and leader behavior. In situational leadership, the subordinates job-relevant maturity (both psychological and job maturity) is the primary situational factor determining a leader’s behavior. Maturity is regarded to be a product of the education level and/ or experience. Psychological maturity is an important aspect of job maturity and it reflects a person’s state of motivation, that is, their confidence and self-esteem levels; which are highly influenced by ethical practices in a firm. Hersey and Blanchard identified that physiological maturity is associated with an individual’s orientation towards achievement as well as the ability and willingness to assume responsibility. Hersey and Blanchard thus concluded that performance is basically a behavioral manifestation of job relevant maturity. Proponents of this model hold the notion that each situation demands a different leadership style and thus the best course of action is dependent on the situation at hand, that is, effectiveness in leadership is dependent on the adaptability to adapt to situations.

It is also imperative to note that the leader-follower relationship determines the outcome of any particular task. The situational leadership is based on both versatility and effectiveness. Four leadership approaches apply under the situational leadership model and are dependent on followers’ job-related maturity. The major notion under this model is that flexibility and adaptability determine which of the diverse styles would apply in the context of varied situations, followers or tasks. 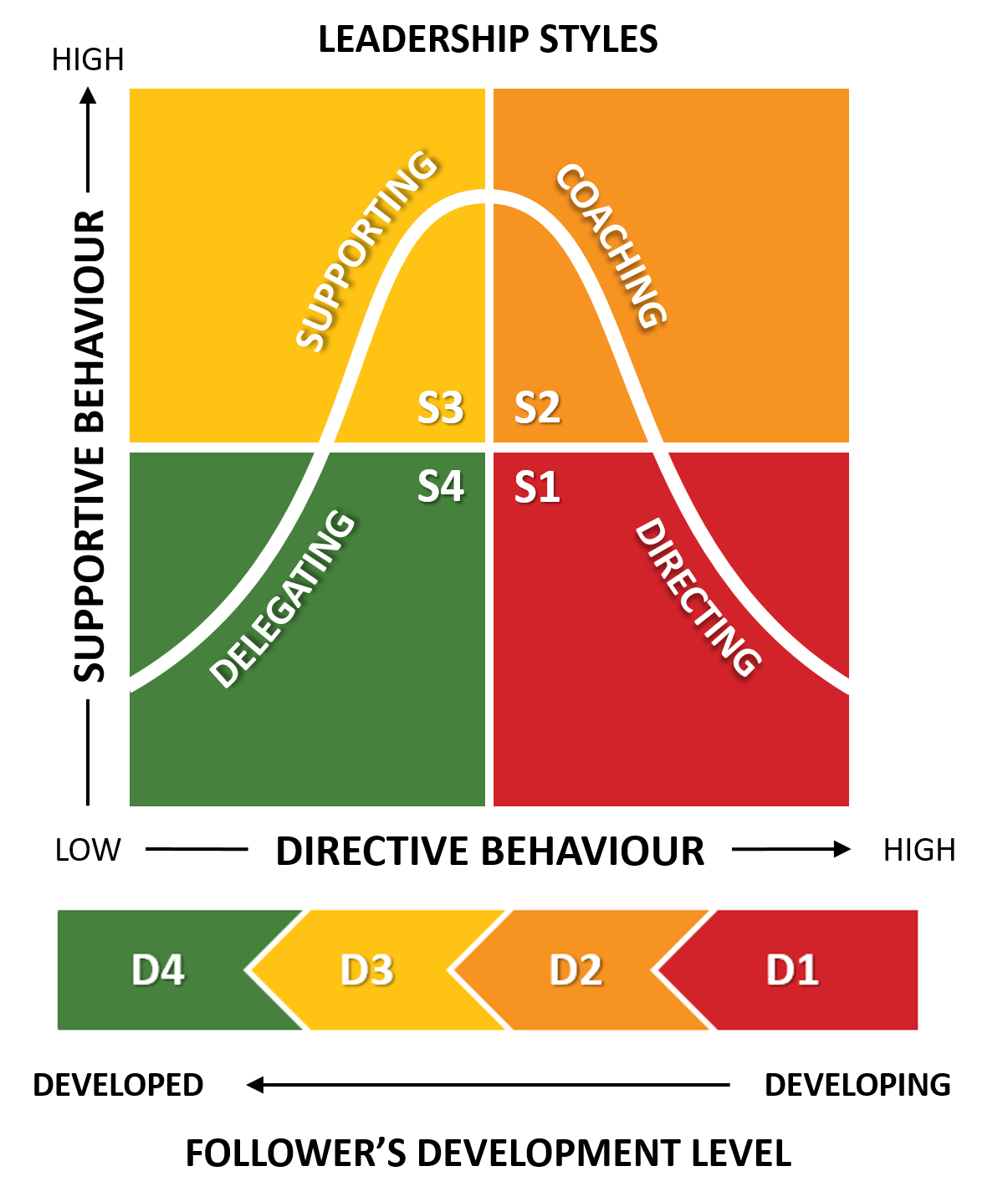 The Four Leadership Approaches/Styles Applied in Situational Leadership are;

There are four major follower maturity levels that determine the necessity for a leadership style.

It is essential to note that differentiated leadership is only possible under the situational leadership approach since different followers with varying levels of needs, abilities and maturity levels are led. The situational leadership model is based on the perception that real leadership revolves around people management in a manner that is fair for the sake of being mutually rewarding as well as providing productive objectives; which are usually free of any manipulation. According to Hersey and Blanchard, the process of controlling, influencing and motivating followers towards attainment of stated accomplishments relies on three key leadership skills: (i) prediction of future behavior; (ii) understanding the behavior of the past; and (iii) the changing, controlling as well directing behaviors. In this regard, studies shows that effective situational leaders are usually engaged in a number of behavioral manifestations: relationship and task behaviors, which are important in driving creativity and innovation among followers.

The positives of situational leadership stem from the methods that need to be utilized in order to solve the issue. For example, a situational leader must develop emotional intelligence to be aware of not only the feelings and views of their peers, but also the emotions within themselves. This insight will help the leader decide on which particular leadership style will best fit the situation and be effective in leading their associates. To strengthen emotional intelligence, these leaders must be able to utilize and welcome constructive criticism. By allowing criticism and the voicing of concerns, these leaders construct a trustworthy environment within the workplace. In general, situational leadership is simpler to use due to the flexibility it provides to the leader. Once the situational leader assesses each team member’s strengths and weaknesses in certain situations, the route to the best style and solution becomes more clear.