Ask any Techno-freak his list of dream gadgets and the odds are high that the list would be populated by products from Apple. Apple has reached to such an extent that these new age Geeks would consider it a sin akin to homicide not to know about Apple! No wonder many people may at least find it better to pretend to aspire for Apple products when in reality they may not even know its functionality!

So who was (and is) behind this revolution called the “Apple Revolution” which has managed to dominate B-School case study discussions? (Dear Techno freaks this question is not for you!) The person attributed to this revolution was born in February 24, 1955 to an unmarried couple and was later adopted by a lower middle class family and was named Steven Paul (Steve) Jobs. 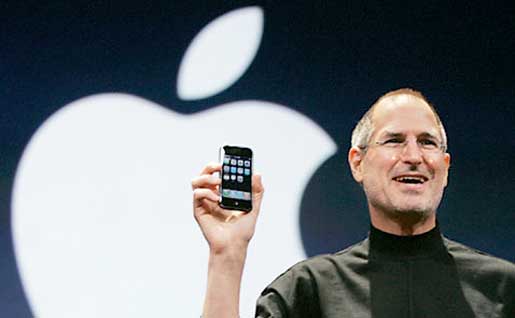 Even before adoption Steve’s adopted parents had to assure his Biological mother that he would be sent to college the only silver lining in Steve’s life thus far. But still he was more interested in the Hippie culture than in collegiate education. But some realization either powered by a strong feeling of materialism or his love interest made him pursue entrepreneurship. Whatever the motive, prospective entrepreneurs have some valuable lessons to learn from his life which we would try to trace.

Lesson 1: Identify your interests and gain knowledge on the same:

When Steve Jobs’ family shifted to what is now called as Silicon Valley, he was very much engrossed with all the electronics that occupied his neighbor’s garage. He did what was required to make his interests really matter. He enrolled himself in an electronics class during his high school and learnt quite a lot about it. He was so much into the world of electronics that he even once called up Bill Hewlett himself who was the co-founder of HP Corporation to get some spare parts for his summer project! This gives a glimpse into the personality of this entrepreneur who had managed to cash in on his interest in a massive way.

Lesson 2: Earn association with the right people and Lesson 3: Learn to influence them!

Steve Jobs befriended a person called Stephen Wozniak (also fondly called as Woz, the co-founder of Apple) who was five years elder to him but shared the same passion for electronics. He was reportedly much more knowledgeable than Jobs in the field of electronics. Woz was already building a computer which Jobs proposed to commercialize. They built an illegal phone hacking device which they called “blue boxes” and Steve was the one who commercialized it and had to stop after almost landing up with the cops.

Woz then landed a job in HP and aimed to work there “all his life”. He built a computer called as which was a great improvement from the existing computer, Altair. Jobs was the one who proposed that they start their own company after (fortunately!) HP was uninterested in Woz’s box of plastic. They named their company, Apple (maybe influenced by Sir Isaac Newton). They aimed to sell their Apple I to hobbyists and software enthusiasts. This was the start of the company that was incorporated in April 1, 1976. Jobs managed to influence Woz to resign his “dream job” and they then designed Apple II after their decent first venture. This time though they took the help of an investor by the name Mike Markkula, a former Intel employee understandably having ample experience in electronics.

The series of incidents stated above one of which was even unethical shows the symbiotic nature of the relationship between Woz and Jobs. It is clear that Woz was the technological brain and Jobs the financial brain in Apple both of which were needed.

His ability to find the right people was even demonstrated at the later stages of the company when he roped in John Sculley, former CEO of PepsiCo (that their relationship soured later was a different issue!). Jobs once even resigned from Apple and started his own venture by the name NeXT. It was Jobs’ ability to attract people (employees and investors alike) that became useful when he started this risky venture.

Lesson 4: Learn from your mistakes and make improvements:

One thing that Jobs realized from the sales pattern of Apple I was that in order to expand, he needed to look beyond hobbyists and enthusiasts. He realized that they should capture the mass market for which he improved the looks of the computer which contributed significantly to the success of Apple II. Moreover Apple I was sold by one bearded Jobs and Woz making it a Hippie product. Apple II was displayed in an exhibition and was sold in a much more suave way.

Jobs was a part of many failures like Lisa, Macintosh (which was only partly successful) which were one of the many reasons for his exit from Apple. But his ability to learn from his failures made him a force to reckon with and contributed to his success in NeXT and Pixar Animations (Jobs’ animation company that worked on Disney’s famous creations like Toy Story, Finding Nemo, Monsters inc. etc.)

Lesson 5: Believe in you and your product and Lesson 6: Market appropriately:

Steve Jobs comes across as a personality who firmly (and even arrogantly!) believed in himself. This is evident with the way he faced failures from Lisa and Macintosh and still remained unperturbed. He went ahead with his plans to make his products a mass market one even when the former CEO of Apple, John Sculley denounced the plan as a “lunatic one” saying that “High-tech could not be designed and sold as a consumer product. How wrong can you be!” But Jobs went ahead with the plan and made Apple what it is now.

Jobs concentration on Marketing also stands out.   He did something very few entrepreneurs had done before. He created a brand called Steve Jobs! He made people associate him with Apple and he was a regular in magazines like Time, Forbes and the like. The name Jobs earned for him helped him to attract investors even after he was ousted from Apple. This was to the extent that the estranged Steve Jobs’ firm NeXT was evaluated at $125 Million when it had not come out with a single product back then!

The brand value of Steve now is news to none. In fact he is growing bigger and bigger from the day he introduced IPod to the day he has introduced iPad.

Lesson 7: Anticipate, if possible even create, trends than simply following them:

Jobs focus on Graphic User Interface (GUI), his thoughts on interpersonal computing when everybody was satisfied with personal computing, his purchase of an animation company and his firm’s raging hits like iPhone, iPod and iPad indicate a great ability of his, the ability to foresee trends and needs and to cater to them accordingly. Maybe this is one factor that makes Steve Jobs what he is.

But there are also certain attributes of Steve that a prospective entrepreneur is better of without. One is his alleged high handedness, his erratic behaviors and maybe it would help an entrepreneur to lead a stable personal life unlike Jobs. It is definitely true that Jobs succeeded in spite of all these pitfalls.

One thought on “Case Study: A Phenomenon Called Steve Jobs”