The founder of Mary Kay Inc, Mary Kay Ash is an outstanding woman in the business in the 20 century. There are many successful entrepreneurs over the world but none as unique as Mary Kay Ash. She is a amazing speaker, motivator. Her achievements left a remarkable mark on American business industry and opened the door for women around the world to achieve their potential and a successful life. She is referenced to as one of the 25 Most Influential Business Leaders during the Last 25 Years in 2004. The United States were lowered to half mast for her when she died in 2001. 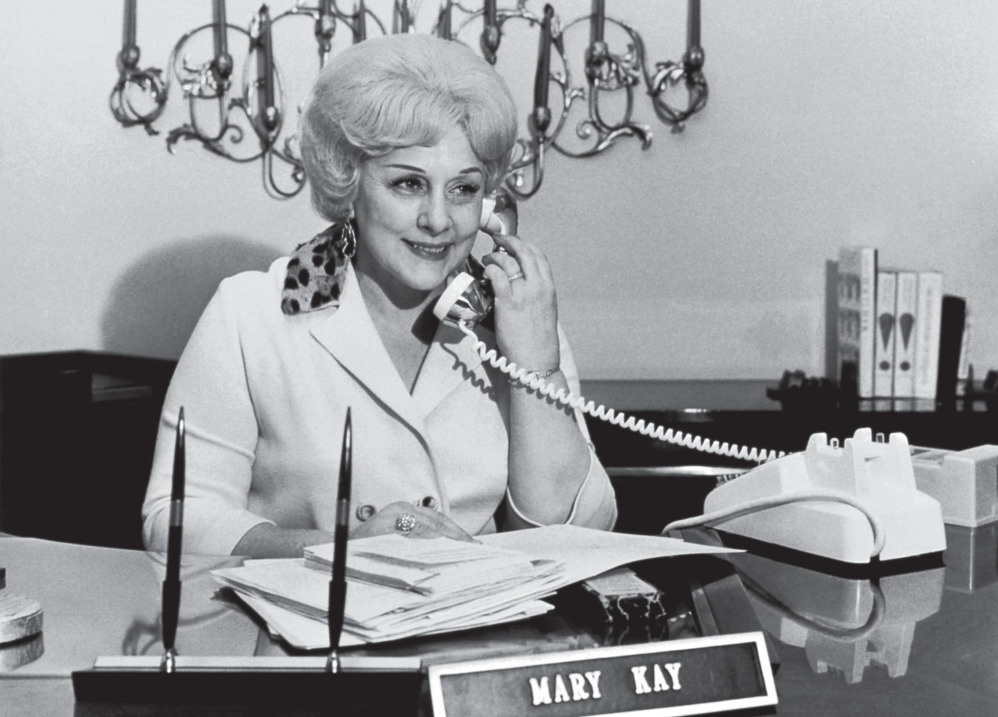 Mary Kay Ash wined numerous awards and honors during her life. Texas Women’s Chamber of Commerce named her as Texas Woman of the Century in 1999. In 2002 Dallas Business Hall of Fame Laureate in recognition of her lifetime achievements as well as demonstrating inspiring business and community leadership. In 2003 Baylor University named Mary Kay Ash as Greatest Female Entrepreneur in American History.

According to American National Business Hall of Fame (ANBHF), Mary Kay Ash was working for several direct sales companies approximately 25 years. At the age of 48, she decided to retire from her work after her underling was promoted above her and that man was paid twice salary than her due to the sexuality issue. She felt her achievement had never been rewarded just because she was a woman. To response this situation, Mary Kay Ash launched Beauty by Mary Kay with her 20-year-old son, Richard in 1963. It was a first company dedicated to open opportunity to women and give them a more beautiful life.

Mary Kay Ash had an amazing ability to forecast market opportunities and to manage the company effectively. She applies herself to open the door for the women and led more and more women succeed in their own terms. Also she is a good communicator not only because she recruits plenty of beauty consultants, but also she was able to personally meaningful to employees, teach them the skills of customer service and sell products.

Also, Mary Kay wrote three books in her spare time. The first was her autobiography, Mary Kay, The second one is Mary Kay on People Management, and it was based on her experiences in business philosophy. Another one You Can Have it All which was the best-selling book after the first day it was introduced. What is worth mention is that Mary Kay on People Management has been included in business courses at Harvard University.

Mary Kay Inc is the one of the largest cosmetics companies in the United States. The world headquarters is located in the Dallas, Texas, U.S.A. It specializes in the production of skin care and related products which including skin creams, cosmetics, dietary supplements, and other personal care items. The majority of their products are developed, tested, produced and packaged by their manufacturing team in Dallas and China. All of the products are sold by the professional women direct sale force. As of 2009, the company sold its products in 35 countries around the world.

Mary Kay Ash built the company culture based on her 25 years work experience. People who work in Mary Kay Inc should take pride in the company, be willing to take risks, seek improvement continuously, follow the Golden Rule – faith first, family second and career third. Also, Mary Kay rewards them regularly and even in public. In her culture, listening to individuals is very important. Hearing what the employees trying to say, constructively criticizing employees and encouraging them at the same time helps make them feel important within the organization.

In the 1960s in the US, most women faced gender discrimination when they seeked promotion opportunity in the workplace. Women suffered injustices just because they were women. This problem was quite common back in that point in time. Women have fewer work opportunity and some of them have to stay at home and look after children. After Mary Kay retired from her job, she decided to do something that could help other women in becoming successful. With this dream, she launched Beauty by Mary Kay in 1963. It is the first beauty line that was dedicated in making life wonderful for women. It was a good career opportunity for women back then when women faced fewer choices.

In the meantime, an American cosmetologist introduced her home-brand skin care products to Mary Kay. This skin care product was developed by her father – a hide tanner. Many of relatives and their friends use these products for several years and the feedback is quite positive. Mary Kay said that “from my own use and the results I had personally received, I knew that these skin-care products were tremendous, and with some modifications and high-quality packaging I was sure they would be big seller!” Therefore, after the cosmetologist died, Mary Kay bought the recipes of the skin products from her family.

With her life savings of $5,000, her great dream, and the original formula of skin cream, she rent a small storefront in Dallas and set up a manufacturing plant. The first employees of the company were one chemist, her second husband and they recruited sales women as independent agents who can pay for their products in advance.

Mary Kay was dedicated in making women’s lives more beautiful. She crates a principle as Golden rule -praising people to success- and faith first, family second and career third. Mary  Kay Ash usually said that it was a company with heart. The objective of the company is not only selling products, but also teaching how to build a better self-image to female customers. As Mary Kay Ash said “I envisioned a company in which any woman could become just as successful as she wanted to be. The doors would be wide open to opportunity for women who were willing to pay the price and had the courage to dream”.

Because of an enriched experience in related industry, she avoided the trial and error period which many new business leaders might face. In 1964, the sales of first year were $198,514 and the number of consultants approximately reached 318 at the end of the year. In 1967, Mary Kay offered stock to the public. In 1969 the company built a 275,000 square feet manufacturing plant in Dallas and built another four regional distribution centers in 1970. The rapid expansion of company was directed by Mary Kay and her son, Richard Rogers, who is in charge of the management functions of May Kay Inc. Rogers gradually built an effective management team by 1985. During the same year, Mary Kay leveraged a buy-out and reorganized her company back into a private ownership by her family. After that, Mary Kay continued the international market expansion during the middle of 1990s to the late 1990s.

A successful company should identify the current market opportunity, concept, required resources. It also needs the effective methods of managing people. All of the beauty consultants in Mary Kay have unthinkable enthusiasm when they serve the customers because of the personal style of Mary Kay Ash. This enthusiasm becomes an outstanding characteristic of Mary Kay Inc. Every year the company rewards their top performance employers with pink Cadillac, jewelry and luxurious vacation. Currently, the program of self-esteem boosts and generous incentives become a subject in business world and a large number of companies study the management method of Mary Kay.

After many years of efforts and continuous improvement their wholesale sales reached one million in the United States market and opened their first branch in Australia in 1991. In 1994, May Kay Inc was honored as ‘Most Admired Corporation in America.’ by Fortune magazine. In 2008, Mary Kay Inc reached sales revenue approximately 2.6 million dollars in wholesales and has double-digit growth from the 1963.

One thought on “Case Study on Entrepreneurship: Mary Kay Ash”