In 1881,  Francis Y. Edgeworth  came up with  a way of representing, using  the same axis,  indifference curves  and  the corresponding  contract curve  in his book “Mathematical Psychics: an Essay on the Application of Mathematics to the Moral Sciences”.  It was  Vilfredo Pareto, in his book “Manual of Political Economy”, 1906, who developed Edgeworth’s ideas into a more understandable and simpler diagram, which today we call the Edgeworth box. 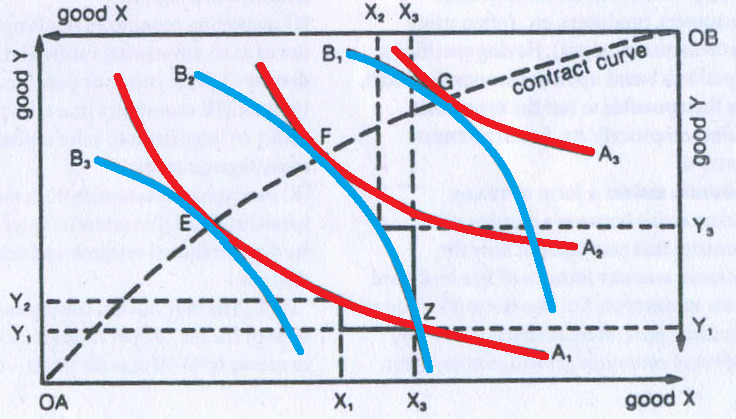 The curve which is drawn from origin to origin is called a contract curve and it joins together all tangency points of the two consumers’ indifference curves. It is called the contract curve since voluntary negotiations which does not leave out any possibilities for mutually advantage trades (so called “efficient bargaining”) could be predicted to end up somewhere on this curve, the exact point depending on the starting point, i.e., the position of the endowment point.

What points are efficient? The economic notion of efficiency is that an allocation is efficient if it is impossible to make one individual better off without harming the other individual; that is, the only way to improve A’s utility is to harm B, and vice versa. Otherwise, if the consumption is inefficient, there is a rearrangement that makes both parties better off, and the parties should prefer such a point. Now, there is no sense of fairness embedded in the notion, and there is an efficient point in which one person gets everything and the other gets nothing. That might be very unfair, but it could still be the case that improving B must necessarily harm A. The allocation is efficient if there is no waste or slack in the system, even if it is wildly unfair. To distinguish this economic notion, it is sometimes called  Pareto efficiency. We can find the Pareto-efficient points by fixing Individual A’s utility and then asking what point, on the indifference isoquant of Individual A, maximizes Individual B’s utility. At that point, any increase in Individual B’s utility must come at the expense of Individual A, and vice versa; that is, the point is Pareto efficient.