Strategy involves standing out from the competition and making choices that give the company a unique and valuable position by offering distinctive products and services. Competitive advantage and profitability can be achieved simultaneously by approaches that create consistent internal synergies and combine a company’s operational activities efficiently. Strategies are formed at various levels of the organization. However, a typical organizational structure incorporates strategies at 3 specific levels: corporate, business and functional.

Corporate strategy defines a company’s holistic growth and management direction pertaining to its various businesses, products and services. Business strategies, on the other hand, are established at the divisional levels and typically focus on enhancing the strategic business unit’s competitive position in its industry. Functional strategies aim to maximize resource productivity and are typically set by functional departments within each SBU to improve competencies and performance. The profitability of a company depends on three primary factors which include the price of a company’s products, the perceived value and attributes of a firm’s products or services such as performance, design, quality and after sales, and the costs of creating this value.

In global market today, it can be supposed that there are two typical kinds of oceans: read oceans and blue oceans. Of two sorts of market, red oceans are defined as a known space for all existent industries nowadays. On the contrary, blue oceans are regarded as an unknown area for industries which do not exist.

As a result, red oceans present all existing rules related to business competition and industrial regulations. This market defines and determines the boundaries for all games and rules. In this market, companies strive to compete with their competitors and rivals in order to gain better benefit and dominate more market share of current demand. Therefore, red oceans provide for space for enterprises to focus on their competition for decades. However, the space is limited while competitive battles are becoming increasingly fierce. There are more and more participants wanting to invest in the same products. This turns products into casual commodities. Although customer demand increases from time to time, the increasing speed cannot keep up with industry growth. As a result, red oceans turn out to be bloody place due to strong competition to gain profit and market share. Or in other words, the more severe competition is, the bloodier the market becomes.

Iphone is a typical example of red ocean case. In 2008, it was regarded that Iphone would defeat Nintendo DS. However, it turned out that Apple did not concentrate on this aspect of business. One of the reasons for this neglect was for blue oceans. Nintendo DS did take advantage of blue ocean strategy. It focused on innovative values that were unseen by its rivals. Particularly, DS provided an interface that enabled players to enjoy “mega-hits” including Brain Age. This helped Nintendo DS dominate Sony PSP. In fact, Iphone still did have greater interface and modern screen touched. But these technologies did not create new value in blue oceans. At this time, due to lack of innovative values for gaming, Iphone was still stuck in red oceans which curbed the Apples’ growth opportunity. At that time, while DS attacked forcefully gaming technologies, Iphone focused on existing 3G without deeply researching DS’s first approach. As a result, DS surpassed Iphone for its first approach in gaming technology while Iphone was struggling in red oceans of smartphones.

On the contrary to red oceans, blue oceans provide a more open and comfortable space for competition. This sort of market presents new opportunities for enterprises to try in new industries and create new demand for profit. Blue oceans are considered virtually wider area that has not been explored deeply and vastly. Unlike red oceans, this market does not contain existing rules of competition. They are still waiting for a creation of the whole rule system. Based on this characteristic, companies in blue oceans have not yet in a close relationship. There are two cases of blue oceans creation. The first one involves creating blue oceans beyond the boundaries of current industry. But this case accounts for little possibility. The second one refers to creating blue oceans inside the space of active industry. 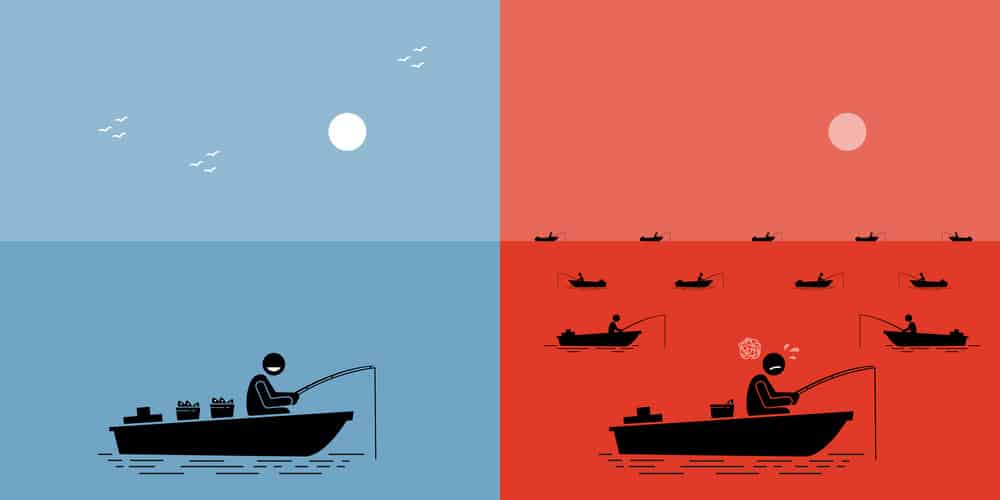 Laundry soaps and detergents were two main divisions in the wash market in India in the mid Seventies. The laundry soap was strongly fragmented. It was the price of oil that decided the quality and price of this product. The second category, the detergent, produced mainly bars and powder and this market was developing very strongly at this time. Also, Unilever’s branch in India was playing the dominant role in these markets. After that, there was a small businessman who started his own detergent business in 1969. He priced his washing powder just one third of the price provided by Unilever. Moreover, his detergent, called Nirma, had the quality 25% lower than that of existing detergent product. Furthermore, that Indian businessman also built a strong distribution system in the Western area where he located his business. At that time, due to demand on mass production, Unilever’s Indian base had to use “blowing tower”, which cost it a lot of capital. In contrast, producing smaller scale of detergent powder enabled Nirma’s to save a remarkable capital. Apart from low starting capital, he also benefited lower material cost due to substantial dependence on “soda ash”, one of the main ingredients formulating washing powder. Nirma brand truly became popular because its price and quality satisfied low-income Indian residents. By the mid of 1980s the Indian entrepreneur reached a market share of 30%. Base on such success of washing powder, he continued to develop detergent bars. However, Unilever’s Indian based branch did not accept Nirma’s surpass. The subsidiary revealed a product called Wheel which had the same price and other costs as Nirma. Evidently, it removed blowing tower technology in the production of Wheel in order to be cost-effective. Because Wheel was the follower of Nirma, it had to do a lot of marketing strategies and conducted numerous communicative methods with potential customers. Consequently, Indian customers started to be aware of Wheel brand in particular and detergent powder in general. Before the competition between Wheel and Nirma took place, a huge number of Indian customers used laundry soaps instead of detergent products. In short, it was the battle between Unilever’s subsidiary and Nirma’s owner that led to the reveal of a new detergent product that did not use blowing tower technology and high awareness among Indian customers who initially used laundry soap. The historical case of Nirma-Wheel which presented an innovative value and dramatic change in customers’ usage was considered the most typical example of blue ocean strategy in India.

To provide a quantitative impact of blue ocean strategies, evidence of business launches of 108 companies  over the years  shows that:

A strategy canvas and four action plans are some primary tools that assist customers with formulating and executing BO strategies to target unexploited opportunities.

Value innovation is a key foundation of Blue Ocean thinking which involves eliminating or minimizing factors that the industry competes on and creating factors that were never previously offered by the industry. This enables firms to save costs and drives up their product or service value for customers allowing companies to break the value-cost trade-off. Value Innovation also involves aligning utility, price and cost. The superior product or service value offered by the firms results in high sales volume over time, and further reduced costs due to economies of scale.

It is important to note that most key industries such as automobile, biotechnology, telecommunication, cell phones are a result of blue ocean thinking. Historically, several companies across numerous industries have offered major products and services that opened new market space and generated significant demand. The case of the evolving US automobile industry provides key evidence of Blue Ocean success.

These examples show how companies that created Blue Oceans were able to earn more revenues than industry leaders in a short time span and managed to achieve growth in industries with limited potential that were unattractive according to competition based strategies. The evolution of the auto industry because of Blue Ocean thinking also indicates that auto companies became successful by appealing to new customers and breaking way from the competition instead of poaching customers from competitors. Instead of offering better solutions to given problems, they redefined the problem by offering comfortable and functional cars for reasonable prices thus reinventing user experience. The implementation of these strategies not only challenged the status quo of the automobile industry but also allowed it to positively evolve over the years generating profitable growth in the process.

By creating a whole new concept that broke the value-cost trade-off and by looking across the market boundaries, the automobile companies offered new critical success factors into their offerings, eliminated or reduced irrelevant factors thereby increasing demand. Invented new forms of transportation by eliminating costly production methods enabled these carmakers to achieve both differentiation and cost.