In general,  good governance  is perceived as a normative principle of administrative law, which obliges the State to perform its functions in a manner that promotes the values of efficiency, no corruptibility, and responsiveness to civil society. It is therefore a principle that is largely associated with statecraft. While the government is not obliged to substantively deliver any public goods, it must ensure that the processes for the identification and delivery of such goods are concrete in terms of i) being responsive to public demands; ii) being transparent in the allocation of resources and; iii) being equitable in the distribution of goods. The principle of good governance has also been espoused in the context of the internal operations of private sector organizations. In this way, corporate decision-making strategies integrate the principle of good governance and ensure that shareholder interests (i.e. public limited companies) and employees are taken into account.

The concept of good governance as developed by the World Bank is essentially a touchstone upon which the prevailing administrative structure of a given country can be measured. Consequently, it provides ample evidence of the robustness of the structural suitability of donors as efficient vehicles of multilateral aid investment to developing countries. Good governance is therefore chiefly envisaged as a set of procedural tools to guarantee the efficacious improvement of the donor identified subject. Politically, however, the principle of good governance has not been very well received. For instance, governments may be reluctant to be held accountable to donor agencies, and they may sometimes display widespread hostility against such agencies (or other bodies) that is construed to be interfering in their (sovereign) domestic affairs. The real or imagined fears have stemmed mainly from the fact that the term “good governance” has largely been identified with “liberalism” and “laissez-faire” policies common in most developed countries. Further, the usage of the term “good” derives primarily from subjective interpretations especially in the context of large multicultural and diverse economies that characterize the developing world.

Good governance has 8 major characteristics. It is participatory, consensus oriented, accountable, transparent, responsive, effective and efficient, equitable and inclusive and follows the rule of law. It assures that corruption is minimized, the views of minorities are taken into account and that the voices of the most vulnerable in society are heard in decision-making. It is also responsive to the present and future needs of society. 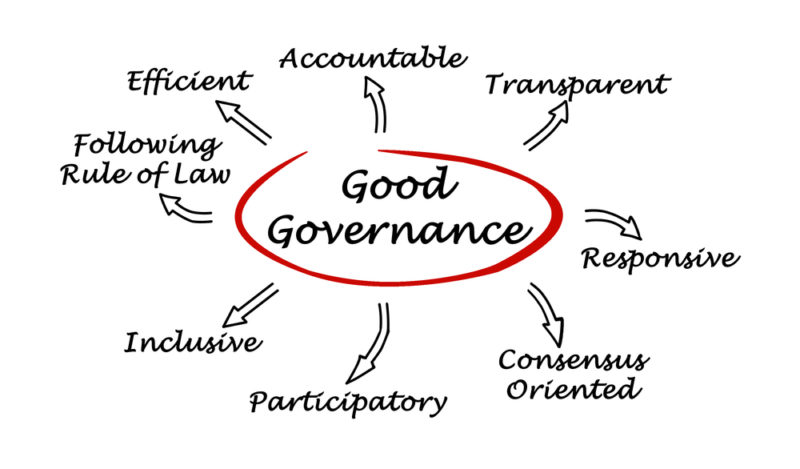 How to Achieve Good Governance

Good governance, to be effective and sustainable, must be anchored in a vigorous working democracy which respects the rule of law, a free press, energetic civil society organizations and effective and independent public bodies such as the Commission for Human Rights and Good Governance, Prevention of Corruption Bureau and the Fair Trade Commission. The Commission is important in ensuring the promotion and protection of human rights, but also in ensuring both transparency and accountability on the part of the government. Good governance requires transparency and efficiency also in different government agencies.

At the political level democratic practices, including transparency in policy making and administration, are important aspects of good governance. This is signified by a pluralistic political system that allows the existence of diversity in political and ideological opinions. No wonder that good governance is said to be more easily achieved and guaranteed in a multi-party system than in a mono-party system. It also means the holding of regular elections applying the principle of universal franchise. In order to qualify as democratic, elections must be free and fair.

Good governance deals with the nature and limits of state power. The doctrine of the separation of powers is therefore relevant in the establishment of whether or not a country has a political system that is responsive to good governance. The doctrine of the separation of powers is based on the acceptance that there are three main categories of government functions: legislative, executive, and judicial. Corresponding to these are the three main organs of government in a state – the Legislature, the Executive and the Judiciary. The doctrine insists that these three powers and functions of government in a free democracy must be kept separate and exercised by separate organs of the state.