In the past, the common perception of a business responsibility was to maximize their firm’s profit. This is because businesses were perceived to always put the shareholder interests first. However, businesses are moving towards impacting the socials and environments. Several studies have found that businesses now have direct responsibilities to various other stakeholders which include preventing the harm of human rights and ensuring that there are solutions available if abuses occur.

The modern view of business responsibility demands companies to help in problems relating to public welfare. As firms have no utmost responsibility for these unpleasant situations, philanthropic responsibilities are still not mandatory. However, due to a decrease of social institutions that provide help to the communities, people have higher expectations towards company and believe that they should take part in filling up the shortages. Carroll has proposed a CSR concept,  Carroll’s Pyramid of Corporate Social Responsibility, which states the organizations four business responsibilities – (i) economic, (ii) Legal, (iii) Ethical, and (iv) Discretionary(philanthropic). These four components are complementary to each other (not mutually exclusive). 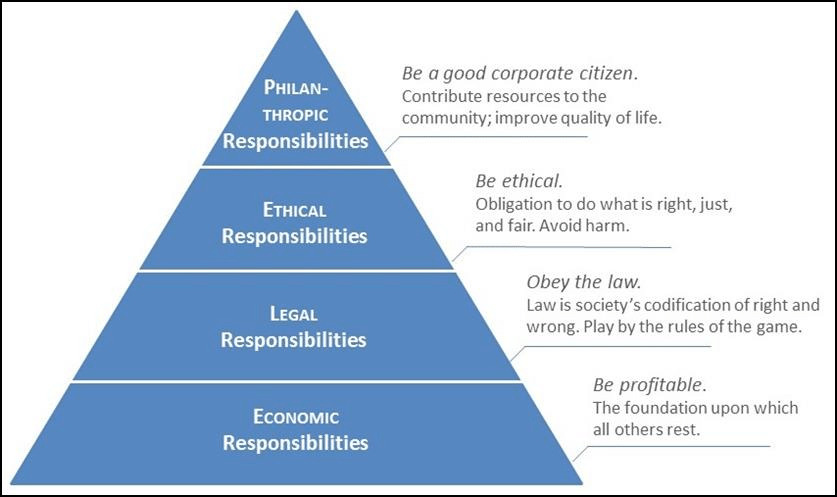 Making money out of a product is the businesses main role. Business is said to be like a poker game, whereby organization are to “play” within the set of rules of the game. Those who do not comply will not be successful in their business. The duty that they had towards employees and shareholders surpasses the other moral obligation as long as it does not go against the law.

Besides that, it is essential for a firm to maximize the revenues of a shareholder by overcoming all the environmental challenges. There is one and only one social responsibility of business is to use its resources and engage in activities designed to increase its profit so long as it stays within the rule of the game. This can be further supported by a case of Dodge v. Ford Motor Company. The Ford founder, Henry Ford aims to provide Ford vehicle for everyone by reducing the price. The shareholders were dissatisfied and claimed that the company should not make a profit-reducing decision. Court held that firms are primarily to bring profit to the shareholders. The company should not exercise any choices which will bring disadvantage to the shareholders.

However, nowadays, the perception of a business role has changed. The businesses concern should not include only the shareholders, but also other parties or entities that would be affected by the organization’s action, which refers to stakeholders. Stakeholders defined as (i) people or institutions that are affected by the corporate action, practices and decisions and also (ii) those who are related to the success of the corporation. Firms are expected to transform the profit maximization mindset to trusteeships or multi-fiduciary stakeholders concept, whereby the business role is now to achieve balance among the stakeholders interest by avoiding doing any harm to any individuals or groups.

Nowadays, most businesses believe that they should be more social responsible towards the society and environment and hence, criticisms arises over the traditional perspective. For example, some critics disagreed that business is a game, as it is a needed component in the society. Besides that, the competitions between different businesses are involuntary, which would involve and influence many other stakeholders, such as government and local communities. Therefore, institutions are said to be accountable to the stakeholders. They need to pay back to the society for what they have done and thus, provide reasonable explanation to the stakeholders.