Human Resource Management (HRM) is the process of acquiring, training, appraising and compensating employees, and attending to their labor relations, health and safety concerns. It includes policies and practices involved in carrying out the people of a management position, including recruiting, screening training, rewarding and appraising. An organization’s human resource management (HRM) function focuses on the people aspect of management. It consists of practices that an organization deals effectively with its employees during the various phases of the employment cycle: pre-selection, selection and post selection. Many firms realize that they must enter foreign markets in order to compete as part of a globally interconnected set of business markets. From an HRM perspective, such organizations must foster the development of more globally oriented managers: individuals who understand foreign languages and cultures, as well as the dynamics of foreign market places. 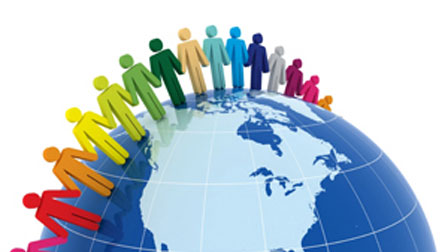 Globalization is the tendency of firms to extend their sales; ownership or manufacturing to new markets abroad. The ongoing globalization will have a strong influence on the fortunes of nations, industries, firms, and individuals. As part of these continuing changes, competitive opportunities and threats have increasingly come from outside of one’s home country. Thus, globalization has a strong influence on some of the aspects of HRM. As a result, it has become routine for managers at all levels, worldwide, to find ways to work with people from diverse cultural backgrounds. These firms must also deal with issues related to expatriation, such as relocation costs, selection, compensation, and training. The type of people, the willingness with which they work, and the commitments they exhibit towards the organization determine the competitive edge of an organization in the global market. The global firm may have the best resources at its headquarters, but the resources cannot be transferred to its foreign affiliates without making it suitable to the new environment.

International human resource management (IHRM) is the procurement, allocation, utilization, and motivation of, human resources in the international arena. International HRM is critical to the strategy and success of global operations. There are evidences that culture and people issues are the biggest roadblocks to global success. It is also found that the problem of hiring quality personnel ranked as one of the main factors inhibiting expansion of US foreign investment in Japan. These problems can be avoided by appointing people with significant experience in foreign and international operations. The distinct features of International HRM are multiculturalism and geographic dispersion as well as the need to address issues such as international taxation, relocation and foreign cultures orientation. IHRM also generates more involvement in personnel life. An international business must procure, motivate, retain, and effectively utilize services of people both at the corporate office and at its foreign plants.

Changes taking place in the international arena necessitates new and more challenging requirements on present and future managers. For example, it is becoming more important for managers to have a basic understanding of the structure of the global economy in which they operate. Besides, with the greater freedom, firms now have to sell, invest, and operate around the globe requires to understand the stability and growth prospects of individual nations and their markets. To sum up, knowledge about how nations, firms, and individuals can address the issues raised by globalization have debatably become part of the indispensable tools to every manager. Awareness about how to conduct business with people from several cultural backgrounds is crucial for the success of an organization.

Companies operating only within the borders of the United States generally have the luxury of dealing with a relatively limited set of economic, cultural, and legal variables. The United States is a capitalist, competitive society. And while the U.S. workforce reflects a multitude of cultural and ethnic backgrounds, shared values (such as an appreciation for democracy) help to blur potentially sharp cultural differences. Although the different states and municipalities certainly have their own laws affecting HR, a basic federal framework helps produce a fairly predictable set of legal guidelines regarding matters such as employment discrimination, labor relations, and safety and health.

A company operating multiple units abroad isn’t blessed with such homogeneity. For example, minimum legally mandated holiday’s range from none in the United Kingdom to 5 weeks per year in Luxembourg. And while Italy has no formal requirements for employee representatives on boards of directors, they’re required in Denmark for companies with more than 30 employees. The point is that the need to adapt personnel policies and procedures to the differences among countries complicates HR management in multinational companies.